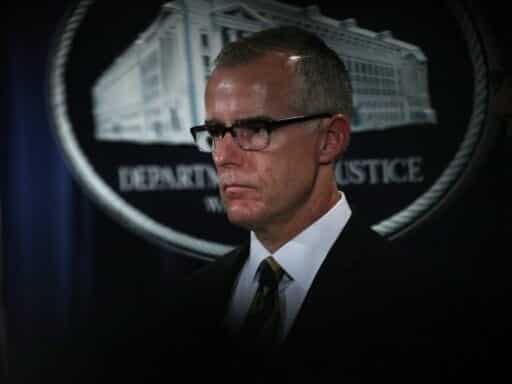 Andrew McCabe, the former FBI deputy director who was fired in March, has once again found himself at the center of a fiery political controversy.

According to a Friday report from the New York Times, McCabe kept memos stating that Deputy Attorney General Rod Rosenstein talked about secretly recording President Donald Trump and discussed using the 25th Amendment to remove him from office. People “briefed either on the events themselves or on memos” by McCabe were cited as sources in the story.

Rosenstein oversees special counsel Robert Mueller’s Russia investigation, and the news has already riled up some of Trump’s conservative allies. But a source also told the Times that Rosenstein may have been joking when he made those comments, an account that was corroborated by the Washington Post’s sources.

McCabe, through his attorneys, has so far denied that he had anything to do with leaking information from the memos and said that they were turned over to special counsel Robert Mueller’s office when McCabe stepped aside from his role at the FBI in January.

The fallout from this story could have major implications for Mueller’s investigation into Russian interference in the 2016 election.

Here’s a quick refresher on McCabe, which includes his connection to the Mueller probe, his controversial ouster from the FBI, and what this latest development might mean.

Andrew McCabe became acting director of the FBI after Trump fired FBI Director James Comey in May 2017. McCabe’s new position put him in charge of the Russia investigation.

Trump, however, expressed his distrust of McCabe on multiple occasions. This had less to do with McCabe himself and more do to with his wife, Jill McCabe, who had run for the state Senate in Virginia in 2015 as a Democrat. Jill McCabe received support from the state Democratic Party and a PAC tied to a Hillary Clinton ally.

Trump used this connection to lambast McCabe and paint the Russia investigation as politically motivated.

Beyond that, McCabe’s name has been connected to two other officials whom Trump says have shown that the Russia investigation is biased: former FBI agent Peter Strzok and attorney Lisa Page.

As Vox has previously reported:

Strzok had mentioned someone named “Andy” in a text message with federal attorney Lisa Page, suggesting there was a discussion about Trump — and not a positive one — in McCabe’s office.

Trump’s attacks on McCabe — and his insinuations of political bias — are part of the president’s larger attacks on federal law enforcement. Vox’s Andrew Prokop wrote in April that Trump “repeatedly urged the department to charge his political and bureaucratic opponents with crimes. McCabe, as a Comey ally and career staffer, was a natural obstacle.”

Trump’s ire toward McCabe — and by, extension, the FBI — led McCabe to step back from his role in January.

In his final report, Inspector General Michael Horowitz found that McCabe “lacked candor” because he inappropriately allowed two top officials to talk to journalists about the opening of an investigation into the Clinton Foundation and lied about doing so to investigators.

The Inspector General recommended that McCabe be fired, and Attorney General Jeff Sessions obliged. Sessions fired McCabe in March, a little more than 26 hours before he planned to formally retire, denying him his pension. (The Inspector General also made a criminal referral regarding McCabe’s role in leaking during the Clinton investigation.)

McCabe fought back, saying the smear against him was an attempt to discredit him and law enforcement writ large, and tied the attacks to the Russia investigation. In a statement after his firing, McCabe said that he was “being singled out and treated this way because of the role I played, the actions I took, and the events I witnessed in the aftermath of the firing of James Comey.”

While it was known that McCabe kept memos during his time at the FBI, Friday’s New York Times report provides the first glimpse of what they might say.

The Associated Press reported in March that McCabe kept contemporaneous memos about his interactions with the president and other topics, and McCabe gave these memos to special counsel Robert Mueller when he stepped away from his day-to-day duties in January, McCabe’s attorney confirmed Friday.

But it’s still unclear how the details of McCabe’s memos were leaked to the Times — and the full context of his interactions with Rosenstein in the instances documented.

More will likely leak in the coming days, but regardless of what happens, it’s clear that McCabe is back at the center of the battle over the Russia investigation once again.

The likely $1,200 coronavirus checks, explained
Will Trump be impeached and removed from office, or face the 25th Amendment?
How Deciem and its controversial founder changed the beauty industry forever
Sanders tops latest Iowa poll, but the 2020 Democratic primary is still a four way race
Dear Michael Bloomberg: Thank you for not running for president
Trump announces the US and Taliban will soon sign a peace deal