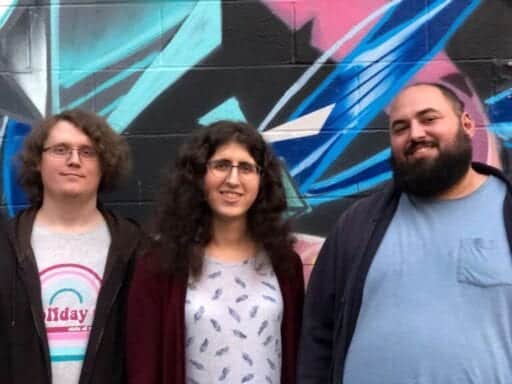 Share
Loading...
Three of the four former Google engineers who were recently fired from the company and alleging Google retaliated against them for workplace organizing. | Catalina Brennan-Gatica

The move is the latest escalation in growing tensions between employee organizers and management at the search giant.

A group of former Google engineers said on Tuesday they’re filing unfair labor practice charges against the search giant, alleging that the company terminated their employment to retaliate against them for workplace organizing.

Last week, Google rattled many within the tech community when it announced it had fired four employees shortly before the Thanksgiving holiday for allegedly violating its data security policies and code of conduct. Now, the four individuals who were terminated — Rebecca Rivers, Laurence Berland, Paul Duke, and Sophie Waldman — are coming forward to formally dispute Google’s claims. On Tuesday, the group announced in a press release that they plan to file unfair labor practice charges against Google with the US National Labor Relations Board (NLRB). They allege that the real reason Google fired them was to quash a growing movement among company employees to question management’s decisions on issues ranging from disparities in pay between contractors and full-time employees, to the company’s controversial projects with government agencies.

“Google wants to send a message to everyone: if you dare to engage in protected labor organizing, you will be punished,” reads a statement released by the terminated employees, which goes on to state that “No company — tech giant or otherwise — should be able to interfere with workers’ rights to organize for better working conditions, including ethical business practices.”

In response to workers’ plans to file labor charges, a spokesperson for Google wrote in an email that the company prohibits workplace retaliation. The spokesperson also reiterated points made by management in a recent memo Google sent staff announcing the firings, in which company leaders said the employees were engaged in “systematic searches for other employees’ materials and work.” The former employees deny that allegation, saying that they searched for material widely accessible to the entire company and in a way that is routine in day-to-day work at the company.

Under US federal labor law, employers are not allowed to retaliate against employees for engaging in collective action relating to working conditions. If the NRLB finds reasonable evidence to support Google did that in this case, the company could be forced to reinstate the fired employees, issue backwages, and inform all its employees about their labor rights, according to UC Hastings Law Professor Veena Dubal.

“I think it is the obvious and right thing to do, given they were all involved in organizing around workplace conditions,” Dubal said about the workers’ decisions to file NLRB charges. “That is exactly the thing that is protected activity and something protected under the law.”

However, the process of resolving the labor dispute could take months or even years. And even if Google is penalized by the NLRB, it might not amount to more than a slap on the wrist, according to several labor law experts. Such was the case in September when Google reached a settlement over complaints from multiple employees about stifling workers’ dissent, and was forced to post a notice about workers’ rights. Despite posting that notice, the company has continued to engage in what many view as a crackdown on employee activism. Google has also long battled with the US Department of Labor over what the government found to be a “systemic” gap in pay for women, an issue that many employees say has yet to be resolved.

Regardless, the employees filing the charges say that their actions are about more than the law — they’re a symbolic action of worker power. Their cases have already caught the attention of Democratic presidential candidates Sens. Bernie Sanders and Elizabeth Warren, who tweeted in support of Google worker organizers last week.

“This isn’t just about what Google has a legal right to do – this is about whether or not workers have say in the direction of the company that they work for,” said Berland, who has been involved in efforts to organize the LGBTQ community against the proliferation of hate speech on YouTube. Berland has also internally criticized Google’s work with the US Customs and Border Protection (CBP). CBP is one of the immigration agencies responsible for enforcing President Trump’s controversial family separation policy, which has come under fire by human rights organizations.

“If Google wants to go into business with CBP, then Google should be talking to workers about it and understanding our concerns, and then they can make a decision with us,” said Berland.

In an interview with Recode, the workers who were fired also shared new details about the circumstances of their firings. Two of them, who had not been publicly named until today, Waldman and Duke, said they were first questioned by Google’s investigations team in September, after they helped organize a petition about the company working with US immigration agencies like CBP and Immigration and Customs Enforcement (ICE). Both said they were also involved in other organizing efforts at the company around issues ranging from working conditions for Google’s temps, vendors, and contractors (TVCs) to its resources for transgender employees.

While Google’s investigations team was questioning them, the employees said they were asked about their organizing activities — such as which colleagues they communicated concerns with, if they used Google Docs to do so, and how many people were involved.

“We thought it would be a very easy request of Google to say, ‘don’t work with these organizations while they’re committing human rights abuses,’” Waldman told Recode. Waldman, along with the other three fired employees, says she never shared internal information about Google’s work with CBP outside the company and warned fellow employees not to leak such information to the press.

Google’s decision to fire these organizers is stirring up worker dissent within the company’s rank and file — adding to growing political tension within the company that’s only been getting worse in the past year. A few weeks ago, around 200 employees and protesters rallied outside of Google’s office in San Francisco on behalf of two of the four fired employees, after it was announced they were placed on administrative leave. Several current employees, who asked to remain anonymous, told Recode that since the firings, more workers have been getting involved in worker organizing and posting memes about unionization on internal message boards.

So far, Google’s full-time, white collar workers in the US haven’t made any formal movement to unionize. But in October, engineers and other full-time employees in Zurich, Switzerland held a talk on unionization, despite management’s efforts to cancel it. And in September, a small group of technical contractors in Pittsburgh, Pennsylvania, voted to unionize. Shortly before the firings, it was revealed that Google hired a firm known for union busting, IRI Consultants, to provide the company “advice on a wide range of topics,” according to a statement by a company spokesperson to The New York Times.

“Offices as distant as Tokyo and Dublin are talking about unions and workers councils,” said Berland. “This is just part of a broad movement that is only going to pick up more steam. And in the end, it’s inevitable that workers at Google are going to win,” he said.