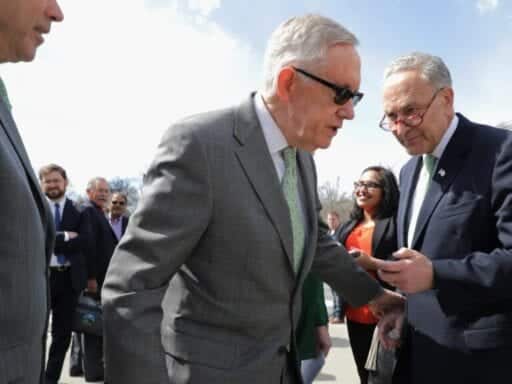 Chuck Schumer just cut a deal on judges with Republicans. Harry Reid’s former deputy chief of staff thinks it was a mistake.

Adam Jentleson, former deputy chief of staff under Reid took a swipe at Schumer’s decision to fast-track judicial nominees in a deal with McConnell in a series of tweets on Tuesday. He also laid out how Democrats could slow down the confirmation process and potentially stop some nominees.

“This comes down to leadership,” said Jentleson, who worked for Reid as communications director and then deputy chief of staff from 2011 to 2017.

Reid represented Nevada in the Senate from 1987 to 2017 and served as leader of the Senate Democrats from 2005 to 2017 and as Senate majority leader from 2007 to 2015. As Senate majority and minority leader, he frequently battled with McConnell on judicial confirmations. The judicial filibuster was eliminated by Reid and Democrats in 2013 in response to Republican obstruction of Obama judicial nominees.

Jentleson said that Democratic leaders could “take a stand” by putting one senator on the floor at all times to object to a nomination. That would force McConnell to run through the “cloture” process for each nominee, meaning he would need to get 51 votes to end debate and start a vote to approve the nominee. Therefore, two rounds of votes would be required, each requiring 51 senators to agree.

I laid out some of the procedural tools Dems could use here. It’s not that complicated: basically, all Dems would have to do is have one Senator on the floor at all times. It doesn’t even have to be the same senator – they can rotate as often as they want. https://t.co/jsuKyt5sgs

“First, instead of giving their consent to instantaneously confirming all of these Trump judges … they’d be recording their opposition to these nominees and to the ability of a [president] implicated in federal crimes to make lifetime appointments,” Jentleson, now director of public affairs at nonprofit group Democracy Forward, wrote. “Second and more importantly, Dems would have a real shot at blocking some of these judges.”

Second and more importantly, Dems would have a real shot at blocking some of these Trump judges.

As is, McConnell doesn’t have to produce a single vote to confirm a single one of these Trump nominees. In effect, Dems are letting them all be confirmed by acclamation.

I just want to emphasize the asymmetry here. Dems would only need to have *one* senator on the floor. McConnell would have to produce 51 votes.

Rather than organize this, the Senate Dem leader gave McConnell consent to instantly confirm 7 Trump judges to lifetime appointments.

A senior Democratic aide told me that most of the judges being fast-tracked were noncontroversial and had Democratic support — and they were going to get confirmed one way or another. “[The] question was were they going to get confirmed while Dems were in DC or while Dems were in their home states trying to take back the majority before folks come back for [late Sen. John] McCain’s services?” the aide said.

Jentleson acknowledged that all of the judges could be confirmed anyway even if Democrats were to put in the effort, but he said at least one judge would probably be blocked.

“Power in the Senate is diffuse,” he wrote. “Senate rules give the leaders virtually zero power. The power comes from norms, obedience, and persuasion. If you can get senators behind you, you can wield a lot of power. If you can’t you’re… not a real leader.”

That’s the basic lesson here. Power in the Senate is diffuse. Senate rules give the leaders virtually zero power. The power comes from norms, obedience and persuasion.

If you can get senators behind you, you can wield a lot of power.

If you can’t, you’re… not a real leader.

Schumer’s office declined to comment on Jentleson’s assertions or the judgeship deal.