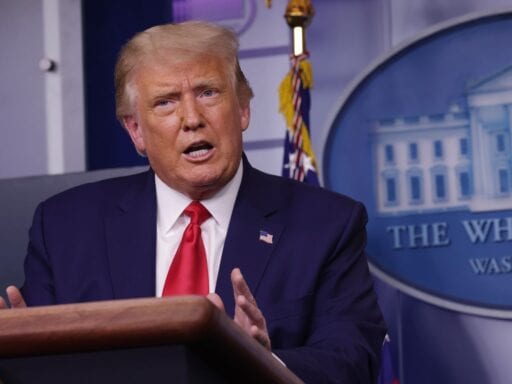 US President Donald Trump speaks to the press during a news conference in the James Brady Press Briefing Room of the White House on September 16, 2020, in Washington, DC. | Alex Wong/Getty Images

Trump faces allegations of sexual misconduct from more than 20 women.

Former model Amy Dorris has accused President Donald Trump of sexually assaulting her during a US Open tournament in September 1997, according to an exclusive report by the Guardian. Her account is now among more than 20 allegations of sexual misconduct that have been brought against the president.

Dorris alleges that Trump forcibly kissed her and groped her outside the bathroom of his VIP box at the US Open, allegations that he denied through his lawyers. Dorris says she was visiting New York City with her then-boyfriend Jason Binn, who introduced her to Trump. Both she and Binn watched the US Open in Trump’s VIP box, and attended events with him in other parts of the city that September. After she went to use the restroom at the US Open, Dorris says, Trump approached her.

“He just shoved his tongue down my throat and I was pushing him off. And then that’s when his grip became tighter and his hands were very gropey and all over my butt, my breasts, my back, everything,” Dorris told the Guardian, adding that she told him to stop. “I was in his grip, and I couldn’t get out of it.”

The publication confirmed that Dorris had told both a friend in the city and her mother about the incident — both of whom corroborated her account. The New York Times has also spoken with two additional friends of Dorris, who said she told them about the incident shortly after it occurred as well.

Binn told The Times he recalled the weekend but had no memory of any advances that were made by Trump to Dorris. He said The Guardian story was the “first time I heard or saw anything.” Dorris says she likely didn’t tell Binn the specifics of the incident, but asked him to tell Trump to back off more broadly.

Dorris said she had thought about coming forward in 2016 but was concerned about the potential backlash she and her family might face. She says she ultimately decided to do so this year, in part because she wants to set an example for her twin daughters. “Now I feel like my girls are about to turn 13 years old and I want them to know that you don’t let anybody do anything to you that you don’t want,” she told the Guardian.

Trump has now faced allegations of sexual misconduct from at least 22 women. He’s also openly bragged about committing sexual assault in a leaked Access Hollywood tape, during which he talked about grabbing women “by the pussy.”

As Vox’s Anna North has reported, the sexual misconduct allegations against Trump span decades, though it appears the Republican Party has been content to keep overlooking them as he runs for reelection this year:

There was Jessica Leeds, who said Trump grabbed her breasts and tried to put his hand up her skirt when they were seated on a flight together in the 1980s. “He was like an octopus,” she told the New York Times. “His hands were everywhere.”

There was Natasha Stoynoff, who said that when she visited Mar-a-Lago to write a People magazine story about Trump in 2005, he pushed her up against a wall and forced his tongue down her throat. Melania Trump was pregnant at the time.

And there was Summer Zervos, who said Trump invited her to dinner with him at the Beverly Hills Hotel in 2007. She went, hoping for career help. Instead, she said, Trump brought her to his private bungalow, where he touched her breast and pressed his genitals against her.

Writer E. Jean Carroll is one of the women who most recently came forward; she accused Trump of raping her in the dressing room of an upscale department store in the 1990s, which he has denied. Both Carroll and Zervos also have ongoing defamation lawsuits against Trump, who has publicly attacked their looks and their motivations for coming forward.

Democratic presidential candidate Joe Biden has also been accused of sexual assault — by former Senate staffer Tara Reade, an allegation he’s denied. High-profile Democrats have largely supported Biden despite the allegation, with many saying they’re satisfied with his denial.

The GOP’s response to the allegations against Trump this cycle also shows how the party’s attitudes on them have shifted during his presidency. In 2016, there was uproar from some members of the Republican Party after the Access Hollywood tape leaked, predominantly driven by women. Since then, however, it appears many GOP lawmakers have simply accepted the existence of these allegations and are continuing to back Trump for the presidency anyway. Last June, after Carroll came forward, many top Republicans said they were satisfied with Trump’s denial of her allegation, emphasizing that they stood by the president.

The party’s reaction to past allegations suggests that Dorris’s account is unlikely to affect support from many members of Trump’s base come November.