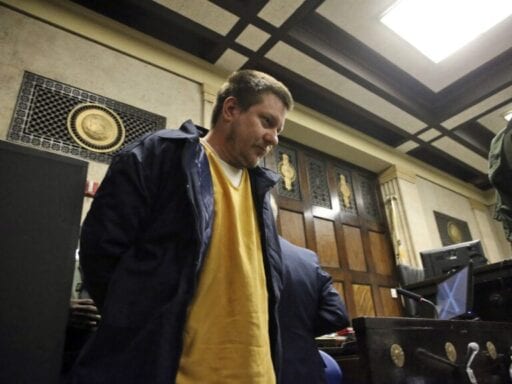 The ruling comes months after Van Dyke was convicted on charges of second-degree murder and aggravated battery.

Months after being convicted for second-degree murder, former Chicago police officer Jason Van Dyke has been sentenced to six years and nine months in prison and two years of mandatory supervised release for the 2014 murder of Laquan McDonald, a judge announced Friday.

Van Dyke shot McDonald, a black 17-year-old, 16 times on the night of October 20, 2014, after responding to police calls for assistance. Van Dyke claimed that he fired after McDonald failed to comply with demands to drop a knife he was holding and made a threatening move toward police.

More than a year later, after a string of lawsuits and a judge’s order to release dash-cam footage of the shooting, city officials released video showing that McDonald appeared to be moving away from police when he was shot, contradicting Van Dyke’s account.

Van Dyke’s sentence concludes a case that, along with a spate of other high-profile police shootings of black Americans in recent years, fueled national discussions about race and police violence. But for Chicago residents, the sentencing, and the anger it is likely to cause, is only one part of larger demands for political change in the city and an end to what experts and activists call a “code of silence” that shields Chicago officers from punishment.

In the years after the 2014 shooting, McDonald’s death became a flashpoint in Chicago, calling national attention to a decades-old divide between the city’s police force and its black and brown residents and sparking waves of protests. It fueled a damning Justice Department investigation into the Chicago Police Department, a new consent decree aimed at reforming the department, and a wave of political changes in the city.

Van Dyke went on trial last September, opting to present his case to a jury rather than have a bench trial before a judge. The trial marked the first time in more than three decades that a Chicago police officer has faced murder charges. Van Dyke is also the first Chicago officer in roughly 50 years to be convicted for an on-duty shooting.

During last year’s trial, the prosecution argued that Van Dyke unnecessarily shot McDonald, noting that no other officer on the scene used deadly force. The defense said that Van Dyke feared for his life and that McDonald posed a serious threat.

Van Dyke took to the stand in his own defense, telling the courtroom that he believed that McDonald was “advancing” and had raised the knife toward him. “We never lost eye contact, his eyes were bugging out, his face was just expressionless,” Van Dyke said.

The prosecution disputed this account, noting that video of the shooting did not show McDonald raising his arm. The prosecution also challenged Van Dyke’s justification for shooting McDonald so many times, noting that the video did not show the teen attempting to get up from the ground as the officer had claimed. A jury issued its guilty verdict on October 5, some eight hours after beginning deliberations.

Van Dyke’s September trial did not include discussion of citizen complaints against Van Dyke, but the Friday sentencing hearing included testimony from several black men who have accused Van Dyke of excessive force during police stops. During his time on the stand, Ed Nance described a 2007 interaction with Van Dyke where Nance was handcuffed so violently that both of his shoulders were injured.

“I’m in constant pain every day,” Nance, who was visibly emotional during his time on the stand, told the courtroom. In 2009, Nance was awarded $350,000 in a federal excessive force lawsuit against Van Dyke and another officer involved in the incident.

Chicago police officers and family members of Van Dyke also testified, asking the court for leniency. “My husband does not deserve a lengthy [sentence] for doing his job as a police officer,” Van Dyke’s wife, Tiffany, said Friday.

Prior to the sentencing, local activists expressed concern that Van Dyke would be given a “slap on the wrist” by the judge. “People want Jason Van Dyke to do virtual life in prison,” activist William Calloway told NBC News. “Anything less would not be justice for Laquan McDonald.”

Concerns about Van Dyke’s sentencing were amplified on Thursday, when three current and former Chicago officers accused of covering up the McDonald shooting and filing false police reports backing up Van Dyke’s account were acquitted on charges of conspiracy, obstruction of justice, and official misconduct.

In her ruling in that case, Cook County Associate Judge Domenica Stephenson argued that prosecutors could not prove that the reports were the result of a conspiracy, saying that it was wrong to rely on the dash-cam footage of the shooting and dismiss the officers’ perception of what happened. A similar argument failed to convince a jury to acquit Van Dyke last year.

Activists and members of Van Dyke’s family were disappointed with the decision, arguing that it preserves a “code of silence” in the Chicago Police Department. “To say that these men are not guilty is to say Jason Van Dyke is not guilty,” Marvin Hunter, McDonald’s great-uncle, told reporters on Thursday.

2 primary races to watch in Indiana
Elon Musk: SpaceX and the Boring Company will help the Thai boys trapped in the cave
Inauguration week could turn violent, so Airbnb canceled all DC reservations
Exploring the history of seduction, from Casanova to Tinder
Trump loves Twitter but the majority of US Twitter users hate Trump
Pete Buttigieg’s Medicare-for-all-who-want-it plan, explained