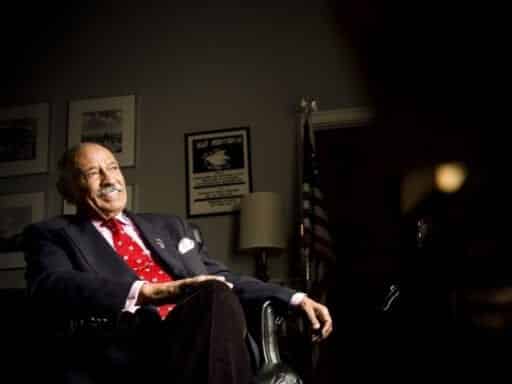 Conyers was known for his civil rights work. He resigned in 2017, facing allegations of sexual misconduct.

Rep. John Conyers — the longest-serving black member of Congress — has died at age 90.

The retired Michigan Democrat joined the US House of Representatives in 1964, representing a district that included part of Detroit. He dedicated himself to civil rights causes, from working to quell riots in Detroit in 1967 to consistently introducing legislation that would have created a framework for the federal study of the impact of slavery and potential reparations. And during his final term in Congress in two years ago, he also put forward a sweeping single-payer health care bill reminiscent of Medicare-for-all.

While Conyers was celebrated by his colleagues for the length of his service and his commitment to equity; he ended his career in 2017 facing allegations of sexual misconduct, as Vox’s Ella Nilsen has written:

BuzzFeed first reported that Conyers had settled a wrongful dismissal complaint with a female staffer in 2015, after the woman alleged she was fired from his House office after she refused to “succumb to [his] sexual advances.” BuzzFeed also obtained signed affidavits in which more of Conyers’s staff accused him of “requests for sex acts, contacting and transporting other women with whom they believed Conyers was having affairs, caressing their hands sexually, and rubbing their legs and backs in public.”

Conyers has denied the allegations of sexual misconduct, but he confirmed to BuzzFeed that he had paid his former staffer $27,000 as part of the settlement.

“My office resolved the allegations — with an express denial of liability — in order to save all involved from the rigors of protracted litigation,” he said in a statement. “The resolution was not for millions of dollars, but rather for an amount that equated to a reasonable severance payment.”

Conyers denied these allegations, and said at the time, “They’re not accurate, they’re not true and they’re something I can’t explain where they came from.”

Under pressure from the public and from his fellow lawmakers, Conyers ultimately decided to retire, saying, “My legacy can’t be compromised or diminished in any way by what we’re going through now. This too shall pass. … My legacy will continue through my children.”

He’d hoped one of those children would take his seat; it was, however, won by progressive lawmaker Rep. Rashida Tlaib, who honored Conyers Sunday, tweeting about his commitment to “fighting for jobs, justice and peace.”

Our Congressman forever, John Conyers, Jr. He never once wavered in fighting for jobs, justice and peace. We always knew where he stood on issues of equality and civil rights in the fight for the people. Thank you Congressman Conyers for fighting for us for over 50 years.

During his long tenure — which lasted 53 years — Conyers became a powerful force in his caucus. He served as chairman of the House Judiciary Committee, and helped found the Congressional Black Caucus. He was an early champion of President Barack Obama, and was pointed in his criticism of President George W. Bush, whom he called “an absolute disaster for the African-American community” in 2004. He was also a sharp critic of President Donald Trump, who he said had “failed the conscience of the country.”

Detroit police spokesperson Dan Donakowski said it is believed the former lawmaker died of natural causes in his Detroit home. He is survived by his wife, Monica Conyers, and his sons John III and Carl.

Travel has never been “authentic”
The exclamation point is a loaded punctuation mark! Here’s why.
1917 vividly recreates WWI’s trench warfare. Is that enough to win Best Picture?
As outcry over family separations grows, Trump meets with House Republicans on immigration
Trump falsely suggests wearing a mask at his Tulsa rally could be harmful
Texas just became the first state to shut the door on refugees