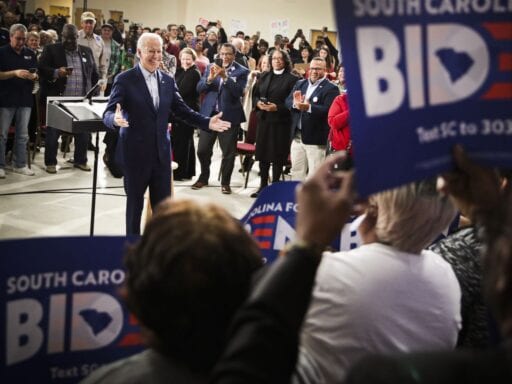 A good night for Biden, a bad one for Bloomberg

South Carolina is the end of the beginning — and it turned out to be a big enough blowout to transform our understanding of the race to come into what really looks like a two-person race between Joe Biden and Bernie Sanders.

First came the traditional two — Iowa’s caucuses and New Hampshire’s “first-in-the-nation” primary. Then came Nevada, moved close to the front of the calendar to give Latino voters more voice in the process, and now, South Carolina, which serves a similar role but for the African-American electorate. None of these states are particularly large or rich in delegates (though South Carolina is the biggest of the four) but they matter because each one stands along on its own day — a beautiful unique snowflake that drives narratives and builds momentum.

Collectively the opening four don’t determine the winner of a nominating contest, but they do drive the shape of the race of the race to come.

But before we head on to Super Tuesday, here’s who won and who lost.

Biden won by winning, a pleasingly straightforward and old-fashioned way of winning. His campaign was on the verge of being left for dead after fourth- and fifth-place finishes in Iowa and New Hampshire, respectively, but started a comeback with a second-place finish in Nevada and now delivered in the demographically friendly state of South Carolina.

The former vice president is still in much worse shape than he was at the beginning of February when he enjoyed a large national polling lead and was only very slightly behind Bernie Sanders in Iowa. At that time it still seemed plausible that Biden might edge out a win in the caucuses and then just roll to a dominant victory. Those days are gone and despite the South Carolina win, Biden is still playing catchup to Sanders in national polls and will likely fall behind in delegates on Super Tuesday.

But he’s stopped the bleeding, his national poll numbers seem to be on the upswing, he retains a deep reservoir of support with black Democrats, and he can make an excellent case that he is far and away the most viable alternative to Sanders. Joe’s back.

When Michael Bloomberg started talking about a late entry into the race in early November, I said he was only going to split the moderate vote and help elect Elizabeth Warren.

Since that time, Sanders has clearly displaced Warren as the leading progressive champion, but the basic analysis applies. Right now, Sanders enjoys a roughly 12-point lead over Biden in national polls, but ranked-choice polling shows he’d have a much narrower lead in a two-person race. Bloomberg’s presence in the race, in other words, is meaningfully increasing the odds of the outcome he says he doesn’t want. Dropping out and giving a modest amount of money to a pro-Biden Super PAC would be a reasonably effective “stop Bernie” move, while spending lavishly on his own campaign is helping Bernie.

But there was a brief period after Biden’s Iowa swoon when this analysis didn’t seem to apply. Amidst a big panic about the VP’s viability as a candidate, a decent crop of frontline house members and big city mayors (many of whom had benefitted in one way or another from Bloomberg’s largess) endorsed the former New York mayor and he received enough free media coverage to largely stomp on coverage of Pete Buttigieg’s bounce.

The reality that Biden is still here — and still the obvious choice for Democrats who want continuity with the Obama Era rather than a political revolution — deals a fatal blow to the logic of the Bloomberg boomlet. Blessed as he is with a $60 billion fortune, Bloomberg can easily blow $100 million a month on a presidential campaign without breaking a sweat, so nobody can force him out of the race. But he presumably wants to actually be president not just run for president, and it’s increasingly hard to see how that happens.

He’s rich, but not nearly as rich as Michael Bloomberg. He spent big on the 2020 primary, but not Bloomberg big. And unlike Bloomberg, he has no record in office or qualifications to be president.

Nonetheless, Steyer decided to run with his spending concentrated in the early states — South Carolina particularly.

South Carolina was the only one of those early four where there was any evidence of him getting traction, but it all it earned him was a distant third-place finish. There’s no path forward here for Steyer and it’s not clear what he’s doing.

The good news is that unlike Bloomberg, Steyer never really attracted any oppo or criticism from his rivals. Steyer’s pre-campaign political giving was extremely well-regarded and broadly appreciated in progressive circles, and it seems like if he wants to drop out he can go back to being a well-liked benefactor with no real harm done or hard feelings. Still, it’s difficult to understand exactly what was going on here.

After the failure of the “party decides” thesis in the 2016 cycle, there’s been considerable skepticism about whether old-fashioned things like endorsements from local elected officials still matter.

The endorsement of Biden by Rep. James Clyburn (D-SC), one of the top figures in the House Democratic caucus, absolutely counted as a big deal by those traditional standards. But did traditional standards count anymore? In South Carolina, at least, it seems that they did — with 47 percent telling exit pollsters his endorsement was a factor in their decision.

Nearly half (!!!) of South Carolina voters said congressman Jim Clyburn’s (D-S.C.) final-week endorsement was an important factor in their vote, according to preliminary exit poll results from Edison Research.

Clyburn announced his support for Biden on Wednesday

That’s a win for old-school politics. But specifically because old-school politics seems to be on the way out, it’s also a considerable personal win for Clyburn who has proven himself to be the rare modern-day elected official who is actually someone who voters care about. The mere fact that people say Clyburn swung their vote doesn’t necessarily mean it’s true, of course, but the mere fact that they want to say it is a sign of the esteem for him locally.

I didn’t love needing to work on the weekend, but the fact is the open primary on a Saturday gave plenty of people the opportunity to vote and once they voted the votes were counted quickly and without a lot of drama.

“State holds election and it’s fine” is not exactly the biggest news in the world, but after the fiasco in Iowa and with the future of caucuses as a whole in question, it’s a nice reminder that there are simple, straightforward ways to hold an election.

And it’s a lucky thing too because this was a Saturday absolutely jam-packed with news. In the morning, the Trump administration signed a deal with the Taliban that should remove US forces from Afghanistan and very likely set the stage for an eventual Taliban victory in their ongoing war with the Afghan government. Concurrently, the United States suffered the first Covid-19 death on American soil and Trump held an afternoon coronavirus press conference in which he began to back off his earlier efforts to downplay the seriousness of the epidemic.

South Carolina is a big story, but it’s not clear how long we’ll be talking about this with so much else going on.

It would be over the top to call Sanders a “loser” in this outcome — he’s still the frontrunner in delegates and national polls, the most likely nominee, and generally in good shape.

And while obviously having a big loss to Biden by wasn’t Sanders’s first choice of outcome, everyone knows this is not the demographically friendliest state for him. But despite years of hard work and organizing aimed at bolstering his standing in black-heavy southern states, he still came up far short.

Consequently, while Sanders remains in the lead the odds of him scoring a clean victory over Biden have diminished. That means a scenario in which nobody secures a majority of pledged delegates before the convention is now looking more likely.

Clinton won the 2016 nomination in large part thanks to scoring huge margins with African-American voters in places like South Carolina.

And once it became clear how central black voters were to her support, she started talking about politics in a very particular kind of way — talking about intersectionality, asking “if we broke up the big banks tomorrow … would that end racism?”, and invoking the phrase “systematic racism.” These are ideas familiar to younger college graduates, often developed by black intellectuals and popular in racist justice activism circles. And since Clinton did, in fact, obtain overwhelming majorities among African-American voters many 2020 contenders essentially tried to imitate this approach.

Suzanna Danuta Walters in The Nation hailed Warren for running “an unapologetically intersectional campaign,” which she certainly did. So did Kirsten Gillibrand and Julian Castro, both of whom ended up dropping out early, with Castro endorsing Warren and becoming a frequently used campaign surrogate.

In South Carolina we saw that this approach delivered very meager results with the electorate. Both in the Palmetto State and in national polls, black voters seem split between Biden’s back-to-basics kitchen table economics pitch and Bernie’s democratic socialist pitch with the divisions mostly falling along age lines. The two candidates’ pitches on economic issues are very different, but Biden and Sanders are similar in having some of the weakest claims to wokeness and least explicitly intersectional rhetoric in the field. It’s not that racial issues aren’t important or that the candidates doing well in South Carolina don’t have strong policies on them.

But most voters are working class, not necessarily super-familiar with cutting edge intellectual concepts, and not as siloed in their concerns as activists. There’s a strong market in South Carolina for “similar to Obama” and a smaller, but also pretty strong, market for Sanders’ youth-fueled revolution with very few voters looking to attend a critical race theory seminar.

Avengers: Endgame’s new end-credits scene is Hulk-centric
Live results for the Northern Mariana Islands caucuses
Trump is still using racist terms to describe the coronavirus. That has real consequences for Asian ...
Asian American communities grapple with whether police are the right answer to recent attacks
Death toll from 7.0 earthquake near Greece and Turkey rises to over 80
America’s sex education system is broken. This chatbot wants to be the solution.