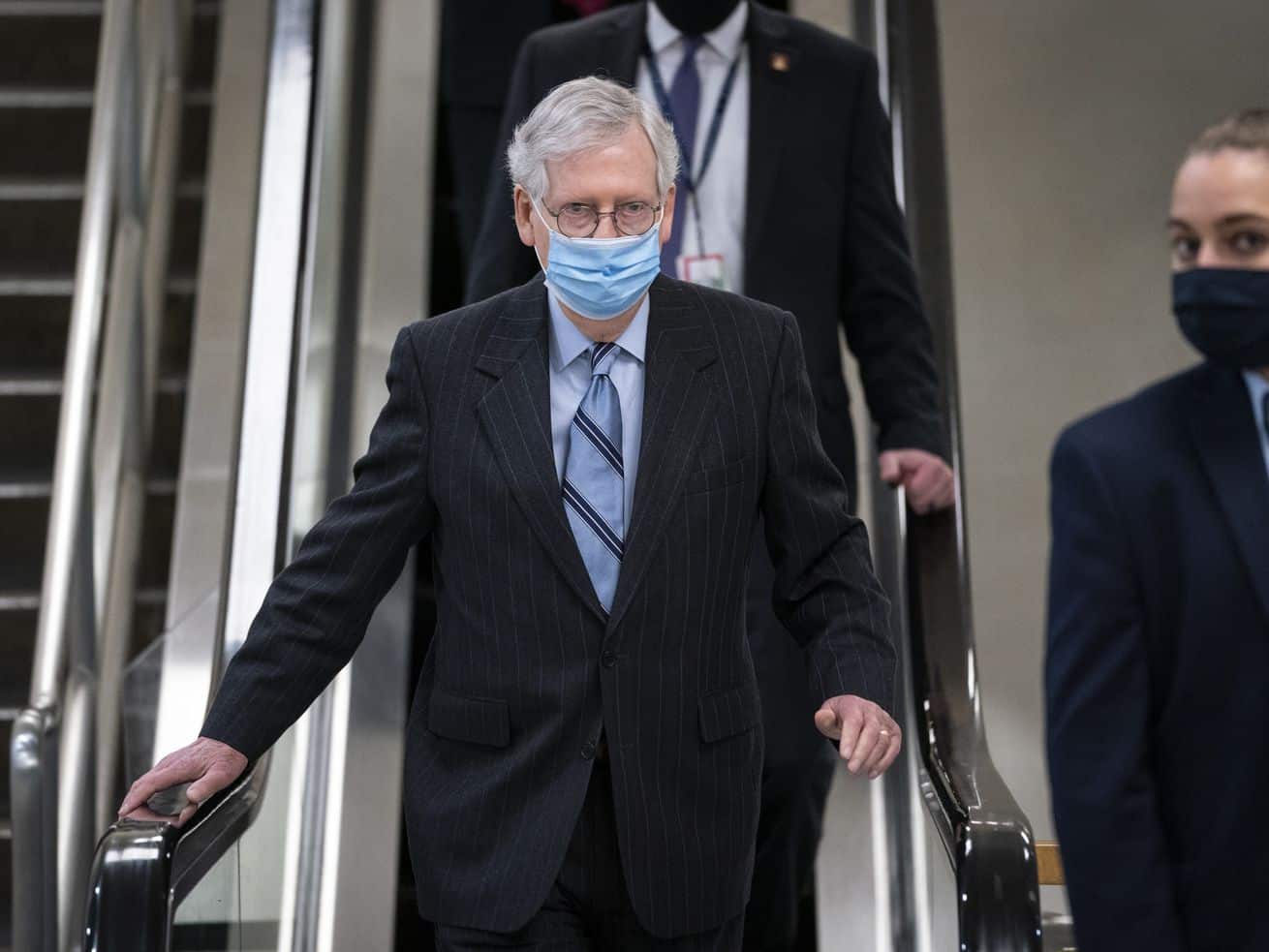 Fox News loves a good “Democrats in disarray” story — but not so much when it comes to Republicans.

Senate Minority Leader Mitch McConnell released a statement Monday evening describing the conspiracy theories embraced by first-term, QAnon-supporting Rep. Marjorie Taylor Greene (R-GA) as “cancer for the Republican Party and our country.” But Fox News viewers might’ve had a hard time learning about this remarkable bit of Republican infighting because it got very little play on the conservative network.

“Loony lies and conspiracy theories are cancer for the Republican Party and our country,” McConnell said in the statement, which doesn’t mention Greene by name but leaves no doubt about to whom he’s referring. “Somebody who’s suggested that perhaps no airplane hit the Pentagon on 9/11, that horrifying school shootings were pre-staged, and that the Clintons crashed JFK Jr.’s airplane is not living in reality.”

Fox News loves covering Democratic disarray but didn’t so much as mention McConnell’s statement until the 10 o’clock hour Tuesday morning. It was brought up on Maria Bartiromo’s show on Fox Business, Fox News’s sister network, but even then Rep. Nancy Mace (R-SC), who was on for an interview, used it as a cudgel to attack Democrats for alleged hypocrisy.

Rep. Nancy Mace bothsides Marjorie Taylor Greene: “There are crazies on both sides of the aisle. We’ve seen that. It’s not just Republicans that have our own issues. Democrats have them too. We’ve seen Maxine Waters.” (Waters have never endorsed the execution of Republicans) pic.twitter.com/NjYMQFhJiq

On the occasions Fox News has brought up Greene, hosts go to pains to avoid detailing the unhinged conspiracy theories she’s embraced, which range from Democrats’ involvement in a Satanic pedophelia cult to the notion that space lasers controlled by Jews are responsible for forest fires in California.

A Special Report segment on Fox last night talked about Marjorie Taylor Green **without giving any specifics** of the conspiracies she supports (9/11 was an inside job, school shootings are false flags, Jewish space lasers etc)

This segment basically paints her as the victim pic.twitter.com/bd911ueCw0

Asked for comment by Vox about its lack of coverage of McConnell’s statement, a Fox News spokesperson pointed to a mention of it during an America’s Newsroom interview with Rep. Steve Scalise (R-LA) that aired just after 10 a.m. Eastern on Tuesday. But Greene’s beliefs weren’t detailed, and Scalise quickly pivoted to bashing President Joe Biden.

For context, consider that by the time Fox News finally got around to mentioning McConnell’s statement on Tuesday morning, it had already been referenced more than 20 times on CNN. And there’s good reason for that — the McConnell/Greene rift represents a major GOP fault line as the party tries to establish an identity in a post-President Trump world.

But, as Lis Power of Media Matters for America put it on Twitter, Fox News might be afraid of offending its viewers.

House Republicans are under pressure to do something about Greene

McConnell’s statement comes on the heels of House Republican leadership seating Greene, who has repeatedly expressed the view that school shootings are staged, on the House Education and Labor Committee — a decision described as “absolutely appalling” by House Speaker Nancy Pelosi (D-CA).

.@SpeakerPelosi on Rep. Marjorie Taylor Greene: “Assigning her to the Education Committee, when she has mocked the killing of little children…what could they be thinking?!? Or is thinking too generous a word for what they might be doing? It’s absolutely appalling.” pic.twitter.com/LtHtA4l6C1

But if Republican leadership had hopes that people had forgotten about Greene’s embrace of QAnon and other conspiracy theories when her placement on the education committee was announced last Monday, they were quickly dashed.

On Tuesday, CNN detailed about how Greene’s Facebook account had endorsed the executions of prominent Democrats in 2018 and 2019. The next day, a video of Greene harassing a school shooting survivor on the streets of Washington, DC, went viral. The days that followed brought renewed attention on comments Green made embracing conspiracy theories ranging from Jewish space lasers to the one McConnell mentioned in his statement about the Clintons allegedly being responsible for JFK Jr.’s death.

House Minority Leader Kevin McCarthy responded to the explosion of scandals around Greene by vowing to meet with her this week. If he doesn’t take action, House Majority Leader Steny Hoyer (D-MD) is planning to deliver an ultimatum to McCarthy informing him that “Republicans have 72 hours to strip Greene of her committee assignments or Democrats will bring the issue to the House floor,” CNN reports.

Greene is unapologetic. On Monday evening, she responded to McConnell’s statement with a tweet in which she suggested the minority leader is “the real cancer for the Republican Party.”

The real cancer for the Republican Party is weak Republicans who only know how to lose gracefully.

This is why we are losing our country.

“Are these postings accurate? I want to hear from her. Before I judge what to do about her, I want to know what the facts are. If these are not accurate postings, they’ve been manipulated, I’d like to know that,” Graham told reporters on Tuesday, even though many of the “postings” in question consist of Greene filming herself spouting conspiracy theories.

GRAHAM on MTG: I rode down with her going to GA. Had a very pleasant experience…I want to hear from her. Before I want to judge what to do about her I want to know what the facts are. If these are not accurate postings they’ve been manipulated, I’d like to know that… pic.twitter.com/AUvqIwG3Az

Graham, who was recently harassed by QAnon supporters in an airport, seems to have misgivings about denouncing a significant chunk of the GOP base in the manner McConnell did.

Fox News seems to be straining to keep its coverage of Greene to a minimum. But the disparate responses from Republicans to the circus of scandals surrounding Greene encapsulates how the GOP is struggling to deal with the culture of conspiracy theories it fostered during the Trump era.

Google’s former CEO hosts an exclusive retreat in Yellowstone each July. You won’t hear much about i...
Amazon’s surveillance cameras fly now — which is terrifying
The Good Place is finally back on track
America’s looming housing catastrophe, explained
Hard seltzer is here to stay
A Trump supporter called C-SPAN in tears to ask if her president had lied to her