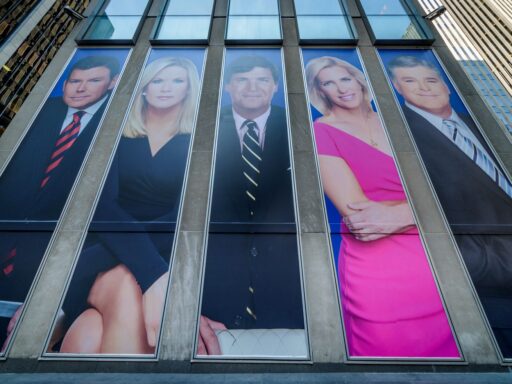 They’d have you believe the ongoing humanitarian disaster is primarily an economic problem hurting business owners.

Fox News’s coverage of record-high US coronavirus case numbers and hospitalizations is a stark example of how the network’s “news” programming sometimes serves as news-adjacent propaganda for the right.

According to the Covid Tracking Project, the seven-day average of new coronavirus cases, hospitalizations, and deaths are all currently at record levels, with deaths exceeding 2,000 per day. But on Monday and Tuesday, Fox News’s coverage of the ongoing humanitarian disaster glorified resistance to public health measures officials have imposed in hopes of slowing the spread.

“There are many reasons to believe that lockdowns may have negative effects,” claimed Covid-19 contrarian Alex Berenson during a softball interview on Tuesday with America’s Newsroom host Sandra Smith.

Along similar lines, Monday’s edition of Outnumbered devoted an entire segment to a sheriff in California who says he won’t enforce the governor’s public health regulations.

“A lot of these governors are very focused using this power trip that they now have and shutting people down without giving them real evidence or real science to back it up,” opined Fox News contributor Katie Pavlich on the show.

Monday’s America’s Newsroom featured a friendly interview with an attorney representing a Staten Island bar owner who allegedly assaulted an officer who tried to enforce shutdown orders. Hours later, anchor Bill Hemmer interviewed a “frustrated restaurant owner” in Los Angles who said, “Yes, the numbers are spiking, but we knew that would happen in the winter, right? … The solution that they’re giving is worse than the cure.”

“I thought you were excellent just trying to relay your story, your message,” Hemmer replied. (The same restaurant owner was interviewed on Fox News on Tuesday.)

Keep in mind that all of these examples come from Fox News’s daytime programming, which supposedly focuses on news, instead of the commentary of primetime hosts Tucker Carlson, Sean Hannity, and Laura Ingraham. If anything, the commentary shows have been even more egregious — to cite one example, host Steve Hilton on Sunday said, “I want to see a lockdown rebellion.”

One data point illustrates Fox News’s broader framing. According to transcripts compiled by SnapStream, coronavirus “restrictions” were mentioned 28 times during the network’s programming on Monday, while “hospitalizations” were mentioned just eight times. And that point of emphasis was impossible to miss on Tuesday as well.

Ironically, if there’s any group that should be especially concerned about spiking coronavirus cases, it’s Fox News viewers, more than 60 percent of whom are older than 65. Public health officials have repeatedly warned that the risk of adverse outcomes advances with age.

But instead of doing the responsible thing and encouraging people to follow public health science (not to mention common sense) by recommending they avoid crowds and stay home until the situation is more under control or a vaccine is available, the message Fox News is sending its viewers is that the real problem is regulations hurting business owners.

Fox’s MO for covering covid-19: They note the records, but focus on the business impacts of “lockdowns…” https://t.co/DdZ3D6KbAo

That’s not to say that the pain business owners and their workers are feeling right now should be ignored. The economic situation is dire, and some economists expect things to get worse barring the unlikely approval of massive government aid. But the underlying problem is the coronavirus and the lack of federal help for those affected, not the fact that state and local governments are trying to slow the spread by discouraging people from spending time in places where they’re at risk.

You might recall that Fox News was widely criticized during the early days of the pandemic for downplaying its severity and promoting unproven, potentially dangerous miracle cures. Network hosts may not talk about hydroxychloroquine as much these days, but their effort to use the pandemic as a cudgel to own the libs is similarly irresponsible.

Studies have shown that consumers of misleading cable news coverage of the coronavirus are less likely to follow public health guidelines. By framing the pandemic as primarily an economic problem caused by liberal policies instead of a public health problem caused by a novel virus (and exacerbated by a shortsighted federal response), Fox News is not only endangering its viewers — it’s turning a dangerous virus that has now killed nearly 300,000 Americans into yet another culture war issue.

How Trump used charitable funds and a fake bidder to buy a portrait of himself
Amy Klobuchar drops out of the 2020 presidential race
Factory farms abuse workers, animals, and the environment. Cory Booker has a plan to stop them.
Top US military officials are going into quarantine after exposure to Covid-19
5 winners and 9 losers from Game of Thrones’ series finale
The Westing Game is a kid’s book that respects you enough to tell you Uncle Sam is a liar