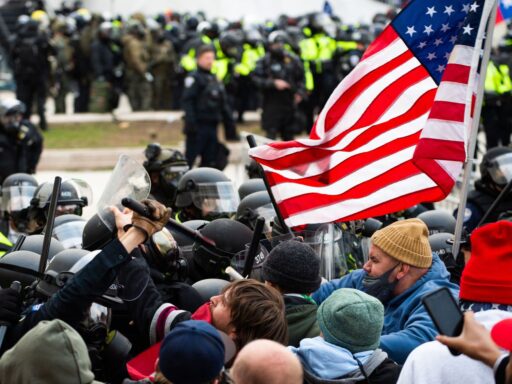 Guess what happens when you tell people, over and over, that they’re being robbed? They may believe you.

For more than two months, Fox News has been telling its viewers that the presidential election has been stolen. Or, at the very least, it could have been stolen.

Now, facing the fatal consequence of that lie — a riot at the US Capitol that left at least four people dead — America’s most popular news network is telling its viewers the events were sad but also understandable. Because voters think the presidential election was stolen.

“We got to this sad chaotic day for a reason. It is not your fault; it is their fault,” Fox’s Tucker Carlson said last night in his opening monologue, arguing that “millions of Americans sincerely believe the last election was fake.”

I encourage you all to watch this Tucker Carlson monologue about what happened in DC tonight. pic.twitter.com/6sGHLOFcrA

You could hear the same argument throughout all of Fox’s programming Wednesday night. “Does anybody in the media, anybody in the left, do they want to understand how hundreds of thousands of Americans, what motivated them to leave their homes and their towns and their cities and often fly or come long distances to be at the massive rally?” Sean Hannity asked Wednesday night.

And Fox and Friends host Brian Kilmeade had at least part of an answer: It was a “frustrated electorate” who felt they “haven’t had their day in court.”

Fox’s Brian @Kilmeade: “This was a culmination of four years of them denying the President won the election and claiming the Russians flipped votes. This is four years of investigation, and four years of a frustrated electorate who feel they haven’t had their day in court.” pic.twitter.com/EaAuYf0uHu

The cynical circular logic is galling, even by Fox News standards. It’s also the logical conclusion of the path Fox set out on after the 2020 presidential election, when it started preparing for life in a Biden administration. The plan was obvious: Fox would spend four years riling up viewers by telling them the Democratic president was illegitimate — as it had done for the last two Democratic presidents.

But Fox can’t back down now, even after the deadly debacle it helped foment. It will have to continue telling millions of Americans that they’re right to think the election was stolen from them. If you’ve been serving a steady diet of red meat, your customers won’t suddenly accept chicken or tofu.

So consider this a preview of the next four years: A key news resource for much of the country, trying to toe an imaginary line between inciting violence and offering sympathy to the violent.

The “people have a right to be angry” isn’t the only line of rhetorical defense Fox has employed in the hours after the violence. Fox hosts and guests have also argued that the rioters only made up a small percentage of the MAGA movement that gathered in Washington; they’ve floated theories rioters were actually disguised antifa instigators; and they’ve whatabouted by comparing the riot to protests and violence that erupted after George Floyd’s killing last summer.

And Fox isn’t the only one arguing that Donald Trump’s supporters should be livid after losing. Large swaths of the Republican Party have supported Trump’s unfounded and disproven fraud claims, or at least allowed the rest of the party to indulge in them. Even after Wednesday’s riots, more than 100 lawmakers supported a futile attempt to overturn the election.

Nor is Fox the only media outlet or movement encouraging the lies. Fringe networks like OANN and Newsmax have tried their best to make Fox look middle of the road, and have at least succeed in worrying Fox employees about a competitive threat.

The fever swamps of the internet and social media are even worse, letting unhinged conspiracy theories like QAnon thrive unchecked. Ashli Babbitt, the woman shot and killed in the Capitol Wednesday, appears to have been a QAnon adherent. (Carlson, in his monologue, wondered aloud why Babbitt, who he said “looked pretty much like everyone else,” would storm the building.)

All of which puts even more pressure on Fox News to cater to its most unhinged and dangerous viewers — if they’re not getting what they want from Tucker and co., there are new options a click away. But at the same time, Fox also has to keep its programming palatable to enough Americans to justify the advertising and affiliate fees that make it the key driver in an enterprise worth some $20 billion.

There’s zero chance that Fox will use the tactic that Twitter and Facebook just wheeled out — making a public, belated break with Trump in the last hours of his presidency — because it needs Trump supporters to stick around for the next show. So they’re stuck with a tricky balancing act. Don’t waste any sympathy on them.

How HIPAA lets Trump pick which medical details are released to the public
Here’s what WeWork is giving laid-off employees who aren’t named Adam Neumann
The moral cost of America’s meat-supply obsession
Police deploy water cannons and live ammunition at the latest Hong Kong protests
Chinese and Russian spies may be listening in on Trump’s cellphone calls
Mr. Feldman goes to Washington