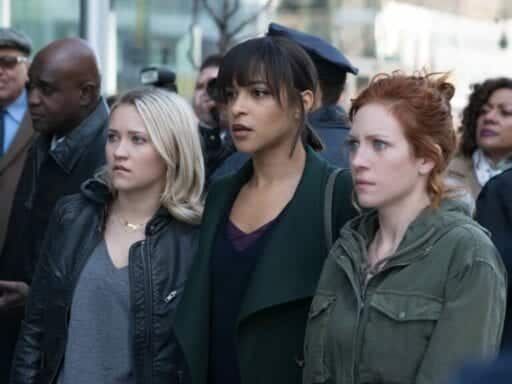 It’s so close to being good that its badness feels somehow worse.

Almost Family is one of the worst new TV shows of the year, but what’s uniquely frustrating about it is how close it comes to working. With a few minor tweaks here and there, it could have been fascinating, maybe even really good.

It certainly has potential. The series is based on the Australian show Sisters, in which the daughter of a fertility expert learns that her father impregnated potentially hundreds of women with his own sperm, all without their knowledge. They already wanted to have kids, right? Wasn’t he doing them a favor?

The daughter then meets two of her biological half-sisters and decides to build a relationship with them. Yes, what their father did is horrifying, but with the right tonal choices, this story might still be able to find an audience.

It’s easy to see why a US TV network, hungry for its own This Is Us, would seize on this premise, especially when executive produced by Friday Night Lights and Parenthood genius Jason Katims. (Katims isn’t the creator of Almost Family; that honor goes to Annie Weisman, who has worked with Katims frequently in the past.) And with the addition of director Leslye Headland (Russian Doll!) and a terrific cast featuring three winning young women in Brittany Snow, Megalyn Echikunwoke, and Emily Osment, there were plenty of other folks to push the show in the direction of quality.

But Almost Family didn’t get the tweaks it needed. (I blame network notes, based on no evidence.) As such, it’s a horror series that thinks it’s a dramedy. Quirky music plays as characters uncover evidence of year after year of medical rape, and when the three central characters learn they’re unknowingly sisters, their reaction isn’t to be thrown by their radically altered understanding of themselves and their connections, but to move in with each other. It’s kinda gross but thinks it’s very heartwarming.

The perils of misunderstanding your premise

One of the dangers of broadcast network television is its frequent unwillingness to dwell in darker, more emotionally complicated spaces. It hasn’t always been this way. Plenty of emotionally rich series, from All in the Family to Twin Peaks, aired on one of the big TV networks. But somewhere during the last 15 years, network TV’s discomfort with squirmy material became all but overwhelming.

I pin this to something I call “ABC Music,” named after the network where I first experienced it. It’s plucky, happy string music that plays under scenes that might otherwise seem to depict something tricky or hard to stomach. I call it ABC Music because the network was rife with it in the mid-2000s (Desperate Housewives used this flourish at times almost as sonic wallpaper), but every other network has its own examples. If the audience might be tempted to think about the ramifications of a scene beyond the cursory elements presented on screen, well, the ABC Music is there to let you know that it’s all going to be okay.

These chirping strings are usually used in unsuccessful or even awful shows where somebody in the production process has no confidence in audiences “getting” it, but they’re sometimes used on really good shows, too. (I love Grey’s Anatomy, but it’s definitely a big-time offender in this department.) Perhaps you can see where I’m going with this: ABC Music is all over Almost Family. And when it’s not, there’s a softly strumming guitar and a singer-songwriter’s crooning voice. It’s all going to be okay. Don’t think about the details too much!

The problem with Almost Family is that the second you think about it in any way other than the way it wants you to think, it becomes horrifying. The pilot that aired has been toned down from the pilot Fox originally sent to critics — which was much more in the vein of “My dad who impregnated a bunch of women with his sperm without their consent was sure a quirky guy!” — in that there are now scenes where our main character and her dad grapple with how what he did was immoral and illegal. But these scenes clash with the rest of the pilot, which has the light-hearted vibe of a late-period WB show, one of those ones where attractive young people confronted serious issues in as superficial a manner as possible.

On some level, I get this. The idea of being an only child who suddenly discovers she has a family does have an appeal to it, especially if you can balance this particular monkey’s paw granted wish — yes, she’s got the family she always wanted, but she also had to learn her dad did monstrous things. The Australian series (which I haven’t seen) apparently kills off the dad, which is probably the best way to handle this concept. That way, our protagonist has to grapple with this new family she’s discovered but also with having everything she thought she knew about her dad turn out to be a lie.

But in this series, dear old dad is played by beloved character actor Timothy Hutton, and you’re not just going to kill off Timothy Hutton! He makes a sad face when he realizes what he did was wrong. He tries to justify his actions by saying he was helping childless couples have children. He really does get it, everybody. He does! Whatever added scenes the show cooks up to insist that it knows he did something wrong, it can never overcome its central need for us to see this character in a wholly sympathetic light.

This is what I mean by the show misunderstanding its premise: It understands it enough to know that it has to say something about the horrible crime at its center, but it doesn’t understand how to say that in a way that won’t turn off the portion of the audience that sees this crime as the violation it is. I would be all for a show about three adult women learning they’re sisters, but Almost Family leans heavily on a gimmicky premise it doesn’t need, one that ultimately tanks it. There were other ways to tell a story of finding your family in adulthood. I should know.

Meeting a sibling in adulthood can be a powerful experience, but you wouldn’t know it from watching this show

I met my biological half-siblings in my late 20s, after our father unexpectedly died in his own late 40s. (I had not yet met him when he passed.) It was by far one of the most profound moments of my life, and I’ve written about it. But meeting each other didn’t mean we suddenly had a relationship. We had to grow that over time. We’re still working on it.

It is perhaps unfair to hold my extremely personal experience against a show that, on some level, wants to be a wish-fulfillment fantasy for every bored only child out there. But the problem with misunderstanding your premise and holding the audience’s hand so tightly through every scene is that sometimes you wallpaper over the emotionally resonant moments, too.

What does it mean to your sense of self to suddenly find yourself with a family you never knew about? It might be awkward, sure, but it could also be intensely moving. Almost Family doesn’t really take a stab at any breakthrough more powerful than a group of young women captioning an Instagram photo with #sisters!!!!!!

Say what you will about This Is Us, but networks trying to copy that show often don’t seem to realize how important feeling every single little thing might be to that show’s success. Where other network dramas invite you to never take anything that seriously, to treat even matters of life and death as uncomplicated, with clear-cut heroes and villains, This Is Us asks you to wallow in sadness and grief as much as it wants you to celebrate its joy. It’s not my favorite show on TV, but the longer it runs and the more other networks fail to copy it, the more impressed I am by its insistence on being as gosh-darn emotional as possible.

Maybe Almost Family will get there. It certainly has a good team working on it, and I would love for this show to become the best version of itself. But to get there, it has to be willing to deal with its characters in all their strength and all their weakness. It has to be willing to go to a place that can’t be wallpapered over with a constant accompaniment of music bubbling along to let you know everything is all right.

Almost Family airs Wednesdays on Fox at 9 pm Eastern. Aired episodes will be available on Hulu.

Vox Sentences: Hope for a US-Taliban peace deal
Trump didn’t just fail to address Covid-19. He made the crisis worse.
Geothermal energy is poised for a big breakout
Susan Collins, one of the most important swing votes on Kavanaugh, explained
Steve Irwin said, “My mission ... is to save wildlife.” He did.
Marc Short, Trump’s director of legislative affairs, joins the very long list of White House departu...