France, Germany, and UK say Iran is responsible for attacks on Saudi Arabia 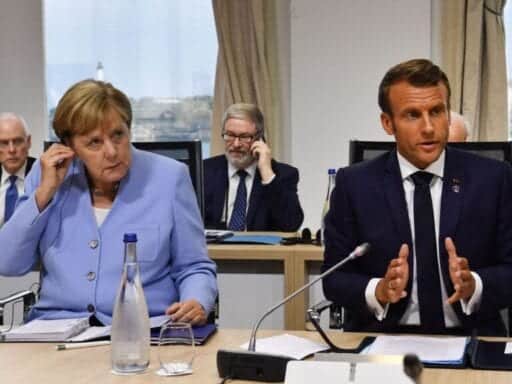 “It is clear for us that Iran bears responsibility for this attack,” the leaders of the three European powers said. “There is no other explanation.”

The Trump administration has blamed Iran for the attacks on two vital oil facilities belonging to Saudi Arabia’s state-run oil company Aramco nine days ago. That assertion was met with deep skepticism by politicians, experts, and even some US allies, mostly because the Trump administration has executed a maximum pressure campaign against the Islamic Republic and many believe Washington has exaggerated intelligence about Tehran in the past.

But America’s claim received a major boost on Monday as the leaders of three key allies — France, Germany, and the UK — put out a joint statement at the UN saying that there’s no question Iran was behind the apparent drone and missile strikes on Saudi Arabia.

“It is clear for us that Iran bears responsibility for this attack,” they said. “There is no other explanation.”

“These attacks may have been on Saudi Arabia but they concern all countries and increase the risk of a major conflict,” the statement continued. The European powers also called on Iran to act more responsibly and in line with the terms of the Iran nuclear deal.

Leaders of , and the just met in NYC #UNGA and issued a joint statement:

It is clear to us that Iran bears responsibility for this attack. There is no other plausible explanation. We support ongoing investigations to establish further details. pic.twitter.com/5uf94Do5ND

This is significant. Ever since the US withdrew from the nuclear agreement last year, the European countries who are party to the agreement — which include the nations from the statement — have tried to maintain good relations with Tehran.

French President Emmanuel Macron in particular has worked tirelessly to keep the accord alive and even tried to broker a meeting between President Donald Trump and his Iranian counterpart, Hassan Rouhani, at the UN this week.

But it seems they cannot ignore the intelligence they have, and decided to openly condemn the Islamic Republic.

With more allies on its side, the Trump administration may feel emboldened to increase the pressure on Tehran even more. That could come in the form of even more sanctions, or cyberattacks that can digitally render critical Iranian computers and networks useless. Those punishments could now be seen as more legitimate since other major world powers more friendly to Iran have also blamed it for the Saudi attacks.

Perhaps trying to fend off the worst, Iran has warned that a military response might prompt an “all-out war” in the Middle East.

The question now is how Iran will respond. With even more countries lambasting it publicly, it’s possible that it may choose more belligerence as a way to compel the US and others to lift the mounting economic and political pressure on it. If it goes that route, though, it may find itself in much more trouble than it’s already in.