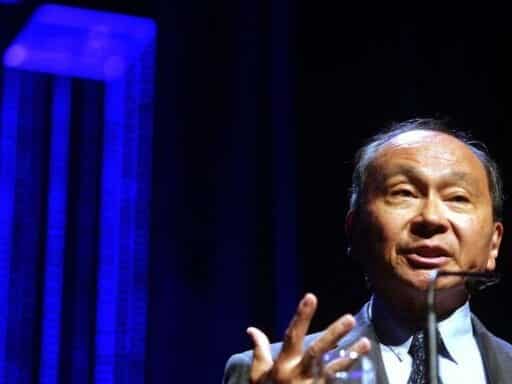 The author of Identity makes a case against identity politics on the Ezra Klein Show.

In his new book Identity: The Demand for Dignity and the Politics of Resentment, Stanford political scientist Francis Fukuyama makes the case that identity politics creates more division and bitterness. On The Ezra Klein Show this week, Fukuyama discusses the history of identity politics, its impact on economic and racial anxieties, and people whose identities are seen as simply politics.

Fukuyama’s recommendations for books “to better understand how identity politics has operated in America or in other societies” argue that our identities are much more tribal that we’d like to believe.

1) Democracy for Realists: Why Elections Do Not Produce Responsive Government by Christopher Achen and Larry Bartel

Political scientists Christopher Achen and Larry Bartel argue against the “folk view of democracy: that we are all these rational, NPR-listening voters that have opinions about policy issues and will vote for representatives that best reflect our policy preferences.” Their research suggests that we instead pick a political party — a team — and support whatever policies our team advocates for.

2) The Righteous Mind: Why Good People Are Divided by Politics and Religion by Jonathan Haidt

Jonathan Haidt’s book on moral psychology argues essentially the same thing — that our political decisions are much less rational than we’d like to believe — but “broadens the scope of view not just to politics but to cognitive activity in general.” Fukuyama says, “It’s very depressing if you actually believe in democracy.”

You can listen to the full conversation with Francis Fukuyama on The Ezra Klein Show by subscribing on Apple Podcasts or wherever you get your podcasts, or by streaming the episode here.

Why Yeezys, a brand based on exclusivity, are suddenly so easy to buy
These New Hampshire primary voters will truly be first in the nation
See the front page of the paper the Capital Gazette put out the day after a fatal shooting
Peloton’s terrifying new ad is the best horror movie in recent memory
Big Tech is “scary” because it wants to be the solution to everything, New York City Mayor Bill de B...
Trump’s State of the Union address: How to watch and what to expect