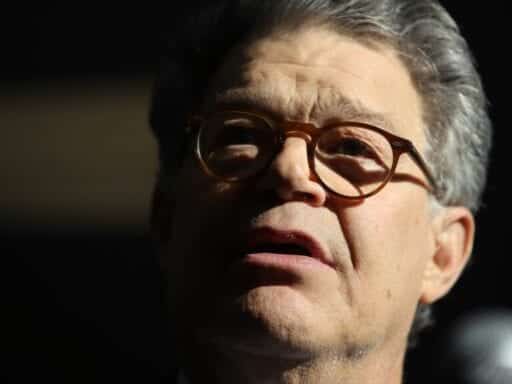 Franken resigned from the Senate after numerous allegations of sexual misconduct.

Former Minnesota Sen. Al Franken, who resigned from the upper chamber in January after multiple women accused him of sexual misconduct, now says he hasn’t ruled out running for public office again.

Franken was replaced by Sen. Tina Smith, who is up for a special election this fall. The former lawmaker, whose case became a flashpoint for Democrats grappling with how to address sexual harassment, added that he misses his time in public service.

“I miss the whole job. I loved that job, I loved the job as Senator,” he said. “It was very meaningful for me and bittersweet, I would like to still be there.”

As Vox’s Laura McGann writes, not all Democrats were on board with the party’s calls for Franken to resign after numerous allegations of groping and unwanted kissing surfaced late last year.

Many Democrats who supported Franken’s policies and considered him a progressive icon were disheartened by how he was treated. Some felt his misconduct wasn’t quite as egregious as that of other men who have also been ousted from their roles as a result of sexual harassment. West Virginia Sen. Joe Manchin called the push for Franken’s resignation “the most hypocritical thing I’ve ever seen done to a human being.”

At the heart of this conflict is a tension between Democrats touting an ideal and following through on it in practice. As McGann notes, the party has long aligned itself with gender equity and women’s empowerment. But when it comes to holding rising stars like Franken accountable for their wrongdoing, people balk at using a standard that seems far harsher than the ones Republicans seemingly ascribe to. (President Trump remains in office despite more than 20 allegations of sexual assault or misconduct.)

While Democrats have broadly supported the need for those accused of sexual misconduct to answer for their wrongdoing, it’s been a tough reckoning for the party when it affects one of their own. As one woman said sadly when discussing Franken at a recent event with New York Sen. Kirsten Gillibrand, “We loved him.”

If Franken mounts another push for public office, it will likely roil the party and test the strength of its purported principles.

NASA’s latest rover is our best chance yet to find life on Mars
Congress will finally grill Jeff Bezos. It’s about time.
The allegations against Brett Kavanaugh are about the present, not just the past
Wall Street investors want Twitter CEO Jack Dorsey out. They might get their way.
Why China just got around to congratulating Biden on his 2020 win
This is an emergency, damn it