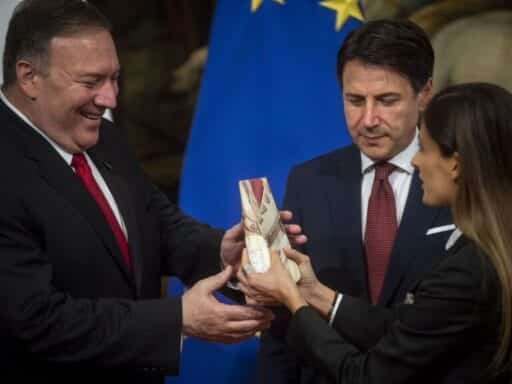 Share
Loading...
Secretary of State Mike Pompeo gets handed cheese in Italy, in protest of impending US tariffs on October 1, 2019. | Photo by Antonio Masiello/Getty Images

The WTO authorized the US to retaliate against the EU for a years-long dispute over aircraft subsidies.

President Donald Trump is going after French wine and European cheese. But this time, it actually makes some sense.

The United States is imposing $7.5 billion in tariffs on imports from the European Union starting October 18 basically because the World Trade Organization said it could. These taxes against the EU stem from a 15-year battle over aviation subsidies that long predates the tariff-happy Trump.

In 2004, the United States filed a claim with the World Trade Organization, accusing some EU countries of illegally subsidizing the aircraft giant Airbus, which the US said harmed the American company Boeing. In 2005, the EU filed a competing claim, saying the US government provided subsidies and tax breaks to Boeing.

The Airbus-Boeing dispute has dragged on for years. In May 2018, a WTO panel gave the US a win, saying the EU had failed to end the Airbus subsidies. That cleared the way for the US to retaliate.

The US was expected to take countermeasures to the tune of billions of dollars in tariffs — and the administration has been advertising a plan to do just that since April. On Wednesday, the WTO authorized the US to put tariffs on $7.5 billion worth of European products as recompense for those unfair aircraft subsidies, or at least until both sides can negotiate a settlement. According to the New York Times, it’s the largest reprisal the trade body has ever authorized.

So Trump, basically, has permission to impose tariffs on European products, and as trade expert Chad Bown of the Peterson Institute pointed out, these tariffs “are not unilateral bullying, but an enforcement mechanism of last resort.”

But that means those fine Italian cheeses and French wines Americans love so much are probably going to get pricier. The US is imposing 10 percent tariffs on aircraft and 25 percent on other European goods, including many agricultural products.

Trump celebrated the verdict on Wednesday, even if he somewhat muddled the reason for the WTO’s decision and attempted to take some of the credit. “The U.S. won a $7.5 Billion award from the World Trade Organization against the European Union, who has for many years treated the USA very badly on Trade due to Tariffs, Trade Barriers, and more,” the president tweeted.

The U.S. won a $7.5 Billion award from the World Trade Organization against the European Union, who has for many years treated the USA very badly on Trade due to Tariffs, Trade Barriers, and more. This case going on for years, a nice victory!

Even if these tariffs are justified under WTO rules, the US’s decision to swiftly move ahead with these taxes could still increase trade tensions with the European Union. The penalties are coming at a pretty precarious time for the bloc, as it deals with the economic uncertainty of Brexit and global recession fears exacerbated by Trump’s trade war with China.

Last year, Trump imposed steel and aluminum tariffs on many of the US’s allies, including the European Union. The administration justified the tariffs on the basis of national security, finding something of a loophole in the law.

The EU retaliated, imposing duties on US goods like motorcycles and bourbon. Last July, the president of the European Commission, Jean-Claude Juncker, met with Trump at the White House, and they agreed to resolve the trade standoff.

There’s been some progress on issues like beef, but it’s small stuff compared to the issues over steel and this WTO dispute. Trump has also repeatedly attacked the EU for being “very unfair” to the US on trade and is reportedly still considering whether to take more extreme measures, such as putting tariffs on European cars.

So these levies probably aren’t going to ease trade tensions. The EU has said it will retaliate — and it’s also waiting on a separate ruling from the WTO on whether the US unfairly subsidized the American company Boeing, which is expected next year.

“If the U.S. imposes countermeasures, it will be pushing the EU into a situation where we will have to do the same,” European Commission’s spokesman, Daniel Rosario told USA Today, adding that the move “will first and foremost hit U.S. consumers and companies.”

There are also concerns that while the WTO has authorized tariffs on the EU as a whole, it’ll inflict pain on some EU countries and businesses that didn’t have anything to do with the Airbus dispute, such as Italy. This week, a protester interrupted Secretary of State Mike Pompeo’s meeting with Italian Prime Minister Giuseppe Conte this week to hand Pompeo some Parmigiano-Reggiano to protest the impending tariffs.

So far, the US and the EU have made little progress on figuring out some sort of settlement over this decade-plus aircraft fight that could head off tariffs altogether. There’s still some time before these US levies go into effect to reach some sort of an agreement — but right now, it looks as if all those fancy European foods are about to go up in price for American consumers.