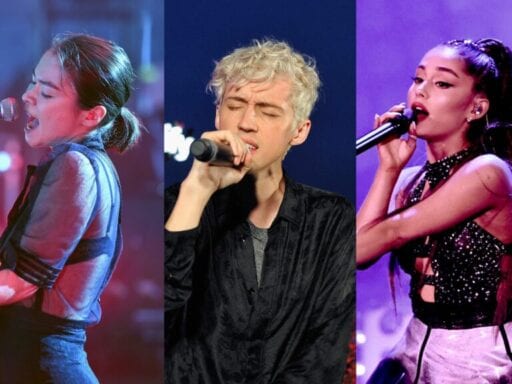 Ariana Grande, Troye Sivan, and Mitski are among this month’s high-profile releases.

When it comes to music, the summer is ending with a bang.

Though Drake’s “In My Feelings,” which was released at the end of June ahead of his hotly anticipated album Scorpion, has been crowned song of the summer by Billboard, August has blessed us with a wealth of musical riches. The last days of the summer have seen the release of several highly anticipated albums from some of the biggest names in pop and some of the buzziest up-and-comers alike.

With a much-hyped new album debuting just about every week this month, you’d be forgiven for missing one or two along the way, or glossing over a record that perhaps deserves deeper consideration than a first listen affords. With that in mind, we’ve compiled this month’s highest-profile album releases, and how they’ve been received, to help you catch up with this whirlwind music month.

So here are the biggest album releases of August 2018, what critics are saying about them, and which tracks to listen for.

As is only fitting for an artist who has stirred up so much controversy over the course of her career, the discussion around Nicki Minaj’s latest album has been a whirlwind, best exemplified by Craig Jenkins’s review for Vulture, which provides an overview of the “low grade hysteria online” inspired by the album’s “rocky rollout.”

That balance is where the critical consensus lies: whether or not the album works as a whole, Queen isn’t a presumptuous title, as Minaj is still undeniably, to quote Billboard, “rap royalty.”

Must-listen track: “Barbie Dreams,” a flip on Biggie’s “Just Playing (Dreams)” that serves as a rap history lesson, an evisceration of her male contemporaries, and a claiming of power.

According to the New York Times, this is Ariana Grande’s “big moment.” Part of that is to do with her level of celebrity right now — her recent engagement to Saturday Night Live’s Pete Davidson has been the center of a media storm (and helped spawn a meme), especially given that one of the tracks on Sweetener is named after him — but more importantly, Sweetener is a bona fide delight.

Hailed by Pitchfork as an “exemplary pop album,” it’s the kind of pop success that most of her fellows haven’t been able to replicate. Per Billboard, “while her peers and predecessors find themselves victim to changing tastes and trends within the pop landscape, Ariana continues to rise untouched above them.”

Must-listen: “No Tears Left to Cry.” Though it might seem like the obvious choice, it’s the lead single on the album for a reason.

Troye Sivan has had a big breakout year, kicking off 2018 with “My My My!” a song that “cement[ed] his image as a gay pop icon, according to NPR, and then following it up with the May release of “Bloom,” a breakout single that Pitchfork called “one of the few mainstream pop songs to imagine queer sex as not just a good time, but as something natural, pure, and innocent.” In between, he performed on Saturday Night Live, collaborated with Ariana Grande, and was a guest performer on Taylor Swift’s Reputation tour — all before releasing his sophomore album, Bloom, this month.

In an interview with NME earlier this month, Sivan said, “I don’t want people to be a fan of me from one song. I want them to be a fan of my sensibility.” And that desire is audible in Bloom. “All the songs have a bunch of different writers,” notes the Stereogum review, “and yet all of these people seem united in their vision and purpose.” Add to that the fact that Sivan is “a new kind of pop star” and you get one of the hottest albums of the summer.

Must-listen: “Dance to This,” Sivan’s collaboration with Ariana Grande, which delivers on the impulse its title suggests.

Thank You for Today, Death Cab for Cutie

Two decades after the release of their debut album, Death Cab for Cutie are still going strong. On their ninth album, the band still sounds just as earnest as ever, even with the introduction of more pop sounds that would seem to contradict their status as one of the preeminent alt-rock bands. The Entertainment Weekly review calls the album a “midlife crisis record,” but if anything, that’s a badge of honor.

“It’s all but irresistible, like slipping into delicious self-pity,” writes Michael Hann at the Guardian. “The melodies are gorgeous, never overdone but always foregrounded: you would get almost nothing from the individual elements, from the bass, the guitar, the keyboards and the voice, but they add up to much more than the sum of their parts.”

Must-listen: “60 & Punk” is perhaps the best example of the sense of longing that suffuses the album. “It’s nothing righteous being 60 and a punk,” sings Ben Gibbard. “But when you’re looking in the mirror, do you see that kid that you used to be?”

Be the Cowboy, Mitski

We’ve saved the best for last. Earlier this year, Iggy Pop called Mitski “probably the most advanced American songwriter that I know,” adding that “she can do whatever she wants.”

The proof is in Be the Cowboy, Mitski’s fifth album.

“On this album, even more than she has before, Mitski makes the music her partner,” reads the New York Times review. “Indie rock was just a detour for Mitski. On Be the Cowboy, her fifth album, she embraces the possibilities of full-scale pop — not to formularize her emotions, but to give them an even larger canvas. It’s exactly the right choice.”

Earning raves from Pitchfork, the Guardian, Vulture, and Rolling Stone, it’s a powerhouse of an album, and easily one of the best albums of the month — indeed, of the year.

Must-listen: “Pink in the Night” might not be the flashiest track on Be the Cowboy, but the way it stretches and yearns exemplifies the potent emotions caught up in the album.

The Michael Cohen, CNN, and Trump-Russia controversy, explained
Kevin McCarthy refutes the idea he has legit concerns about corruption in a single Instagram post
The fight over family separations proved how broken Trump’s America really is
Study: Nearly a third of Americans believe a conspiracy theory about the origins of the coronavirus
Netflix’s Haunting of Bly Manor: The ending, explained
A leader in the fight to protect Roe v. Wade lays out the plan to stop Brett Kavanaugh