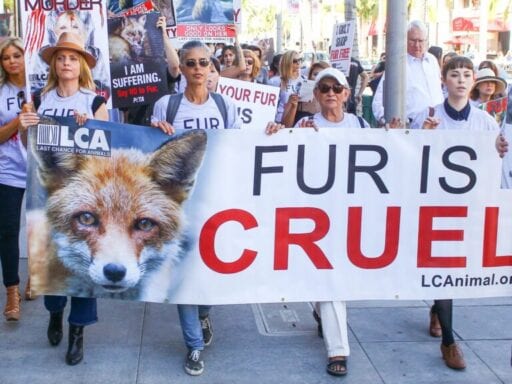 Cities and designers may be parting ways with fur, but sales are still up.

When London Fashion Week kicks off on September 14, fur will be missing from the runway. A survey by LFW organizer the British Fashion Council found that no designers in the lineup plan to use fur. The finding is the latest in a series of recent wins for the anti-fur movement and animal rights groups.

Over just the past year, fashion brands, designers, and cities have decided to do away with fur. What’s responsible for the trend? Advocacy groups like PETA (People for the Ethical Treatment of Animals) have taken credit for pressuring public officials to ban fur sales and manufacturing within city limits. They have also assumed responsibility for persuading designers to stop using fur, all while arguing that socially conscious young shoppers find fur outdated and cruel.

But fur sales tell a different story: They continue to rise. While it may no longer be socially acceptable to drape oneself in mink, fur trim has found its way onto coats, shoes, accessories, and furniture. Animal pelts, it would appear, are still very much in demand.

The fur industry is surviving the activism of animal rights groups

Just last week, Burberry said it will stop selling fur products. Since last year, several fashion houses, including Gucci, Michael Kors, Tom Ford, DKNY, Furla, and Versace, have announced plans to cease using fur as well. The same goes for high-end fashion retailers like Net-a-Porter. Even cities are getting in on the trend: In March, San Francisco became the largest city to ban the sale of fur, but that honor may ultimately go to Los Angeles, which took the first steps toward implementing a fur ban in August.

These wins are rooted in the anti-fur movement that took off in the 1980s. PETA was founded in 1980, and the first Fur-Free Friday, observed on Black Friday, took place in 1986. The momentum certainly made an impact on the fur industry, causing fur sales to wane in the 1990s. But by the early aughts, the industry managed to regroup by selling brightly dyed fur that, to the naked eye, was hard to distinguish from fake fur. Today, furriers have managed to attract customers by selling fur as accents on shoes, handbags, and other apparel. Both of these sales strategies have allowed shoppers to avoid the social stigma of wearing fur, since a full mink in brown is much more likely to attract the attention of fur opponents than a blue fur jacket or trim on boots.

Fur accents and accessories function as sort of a gateway drug in the industry. “We start with the young consumer buying a fur key ring. Then maybe a little later she has more money for a fur bag,” Julie Maria Iversen of Kopenhagen Fur in Denmark told National Geographic in 2016. “Eventually she buys a full coat. [It’s] all part of the agenda, to inspire the upcoming generation of women.”

The agenda seems to be working: This year alone, the US is expected to manufacture more than $352 billion in fur apparel and accessories, according to the market research firm Euromonitor International. That’s a slight gain from 2014, when $336.9 billion of fur was manufactured domestically. But fashion isn’t the only sector responsible for this 4 percent jump in fur manufacturing. The furniture industry has increasingly used fur in chair coverings, and expenditures on fur goods in that sector grew by 10 percent from 2011 to 2016.

Furriers’ ability to weather the ongoing criticism about the ethics of fur has largely been attributed to the global demand for fur, and the perception, even domestically, that wearing fur is a personal choice and not necessarily a moral one. And while animal rights activists have suggested that young people don’t wear fur, National Geographic pointed out that celebrities’ fondness for it — Lady Gaga, Rihanna, Kim Kardashian, and Rita Ora have all worn fur — has likely made it seem hip to young people. Whatever the case, the Fur Information Council of America (FICA) claims that 55 percent of fur shoppers are age 44 or younger.

Beyond any perceived coolness, however, is that fur has cultural influence depending on one’s region or ethnic heritage. In Detroit, a city known for its fur trading history, furs continue to be a staple. In fact, PETA once offered to pay Detroiter Aretha Franklin’s overdue property taxes if she agreed to give up fur. She refused.

For many indigenous peoples throughout North America, fur has always been a way of life. After the anti-sealskin movement of the 1970s resulted in bans on the animal pelts that disempowered the Inuit both economically and culturally, the ethnic group has in recent years attempted to reclaim and revive the sealskin market. Over the past decade, Canadians in particular have reportedly been more willing to become consumers of sealskin.

Animal rights groups aren’t denying statistics about fur’s rise in popularity. Some have even sounded the alarm about the trend, with activists acknowledging that the sales data reflects what they’ve noticed about fur anecdotally.

“The fur industry’s statistics reflect what we’re seeing in the streets — that fur consumption is on the rise,” Edita Birnkrant, the campaigns director for Friends of Animals, told the animal rights magazine Their Turn. “For the sake of the animals, we have to organize and take a more aggressive approach on their behalf.”

Aggressive moves by animal rights groups have often led to controversy and concerns that these organizations are racist, sexist, and sizeist. The most effective approach could simply be more public education about the conditions in which animals raised for their fur live. Animal rights groups say these animals are killed in grossly inhumane ways and raised in conditions with little to no regard for their welfare, and videos documenting the treatment of such animals net millions of pageviews.

But those viewers are likely people already invested in the animal rights movement in some capacity. Getting average consumers to understand the ins and outs of the trade may result in consumers recognizing that whether they’re wearing a full mink coat or fur-trimmed boots, an animal’s life was ultimately sacrificed for their aesthetic choice.

It’s also important to put the fashion world’s seeming embrace of animal rights into more context. London Fashion Week may be fur-free, but the appearance of fur on British catwalks has generally risen in recent years. Although LFW has sworn off fur for now, the material hasn’t disappeared from New York, Paris, and Milan fashion weeks.

Moreover, when fashion houses like Versace swear off fur, it results in positive press for both the brand and animal rights groups. After Versace’s announcement, for example, Nylon ran a headline declaring it “the latest fashion brand to denounce fur.” The use of the word “denounce” frames Versace as having taken an ethical stand.

The same has happened in regard to the California cities banning fur. When San Francisco decided to prohibit fur sales, the Animal Legal Defense Fund ran a headline praising it as “the first major US city to ban fur.” The headline suggested that unlike the nation’s other urban centers, San Francisco actually had a conscience. But is a fur ban in San Francisco very progressive when temperatures in the city rarely dip below freezing?

And though haute couture brands might appear more ethical for dropping fur, their decision to part with it does little to upend the fur industry. That’s because the average consumer is not buying fur at Versace or anywhere similar. According to FICA, 85 percent of US fur retailers and manufacturers are small, family-run businesses. So while the idea that fur sales have dropped persists, it’s rooted in PR wins for animal rights groups rather than a concrete change in fur consumption.

If shoppers don’t realize that sales are up, even as the stigma of wearing fur lingers, animal rights activists can’t disrupt the fur market. First, they’ll have to change the public perception about fur sales. Only then can they change how the public shops.

How to do everything, by the Highlight
You can delay paying taxes if you owe them — but you still have to file on time
Congress could vote on another “interim” coronavirus relief bill as soon as this week
Here’s where things stand in Congress’ $900 billion relief package negotiations
US tops world in coronavirus cases, Boris Johnson has Covid-19: Friday’s coronavirus news
Marijuana legalization has won