FX’s president has been dubbed “the mayor of television.” This interview will show you why. 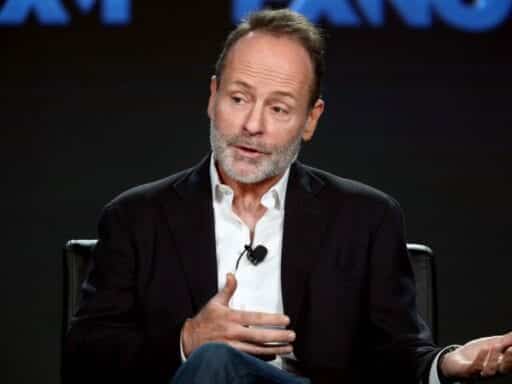 “Each of us is caught in our own timeline. I was born in May of 1962, and I will die whenever I die, and I cannot move outside of that timeline.”

There’s a reason TV critics and reporters call FX Networks president and CEO John Landgraf the “mayor of television” — and it’s not just because that’s kind of a funny title to give to somebody.

Of all the executives in the TV game right now, Landgraf has earned a reputation as the one who’s most thoughtful about the past, present, and future of television; he even coined the term “Peak TV.”

That’s why I was so excited for Landgraf to join me on the latest episode of my podcast, I Think You’re Interesting, to discuss where TV is now and where it’s headed.

We talked about which show on another network he most enjoys, and what he worries the medium is losing in widely adopting the binge model. But we also talked about his personal history and what brought him — someone with an anthropology degree, of all things — to the TV industry in the first place.

Landgraf says he was drawn to television by an abiding love of story, and in this excerpt of our discussion, which has been lightly edited and condensed, he explains just why he believes in story’s ability to push us into other people’s shoes.

How do you think about positioning FX as a responsible citizen of the larger world?

Like you, like a lot of critics and a lot of people who make television, I’m just a lover of art, and I’m a really avid consumer of story. I’m curious. I have a degree in anthropology, not a degree in media, communications, or business, but in anthropology, which I think is reflective of an interest in the human condition.

And I realized that I had that assumption baked in in a way I didn’t even know, but that essentially if you move forward in the timeline, people forget the concentration camps, they forget Nazism, they forget the hard lessons of that, and it comes back as a characteristic in human nature. The thing that I constantly realize is that I may be experiencing only a tiny portion of the macrocosm, but I’m really genuinely trying to understand as much of it as I can.

Part of what’s exciting to me about FX is even though we’ve been trying to make what you’d call premium television, or trying to contribute to the high end or the best of what television is, we’ve always been a commercial-supported network. So we’ve never felt that our constituency was just TV critics or just people who live in New York or Los Angeles. We’ve always felt that our constituency was everyone.

So I’m always trying to understand the specificity of so many different individual stories, whether it has to do with when you live or where you live, what region, your culture, your political orientation, your sexual orientation, your gender, your ethnicity. But then I’m also trying to understand how those specific things relate to the universal human question, and I feel that story has a role to play to try to help gain clarity. I think there’s a lot of confusion being intentionally distributed right now through these new technologies on the internet and other things. So I’m a little worried whether story is up to the task. But I’ve always felt that to be a part of our responsibility.

Especially now in the television landscape, there are shows made for very specific audiences, especially if you go on Netflix or Hulu or something like that. They have an algorithm that will tell you what you want, ostensibly. How do you think about the responsibility of making something for a specific audience, but then making it universal still?

I think about something like Atlanta, which is my favorite show of the year still. Just from hearing about Atlanta, you would not think that Todd VanDerWerff, an extremely white person from the middle of the country, would hook into that show so much. But I did, and it taught me about things I don’t know about. How do you balance those two ideas of the core audience and the larger audience?

One of my biggest concerns about the way technology is evolving and the possibilities that are created by big data and the internet is that I think of the world as having these two strains in it.

One strain I would call demagoguery, and I would call that, broadly speaking, just give the people what they want. We don’t care whether it’s good for them. Whether it helps them. If what the people want is fat, sugar, crunch, and salt, just figure out the perfect ratio. And don’t care whether it will kill you or if it’s good for you or not. I think that in every business practice or political practice, the easiest thing, on some level, is to do that.

And then you contrast that with trying to find something that is both tasty and nutritional, that’s beautiful but ugly, funny but dramatic. Challenging. I think artists, and art in general, the stuff that I have always liked the best is the stuff that tries to take a very specific shard of the human condition and then achieve some universal portrayal of the human condition.

A common characteristic of every movie and every book and every play and every television show I’ve ever loved is that even though it’s about one specific place and time, it’s really about humanity writ large.

I think Atlanta, which is a show that I also really love, has done something really special, which is it’s gone deeper and more specifically into a particular prism of the African-American experience in Atlanta, and yet it resonates with me anyway, as a pathway into some universal understanding of the human condition — not just blackness in America, but America today and even bigger questions than that.

The thing that I really worry about is that we’ve built this perfect feedback loop, where the only thing anybody ever gets is what they’ve liked before, or what they’ve told you either consciously or unconsciously through your studying of their data that they want. So nobody gets any new ideas, right?

I’ve got a smartphone on the table in front of me, and I’ve read these fascinating studies that say that the closer a smartphone is to someone, the lower they perform on an IQ test. Literally, it’s different if it’s on and in front of you than if it’s on in your bag on the floor, versus if it’s out of the room.

Just because you have a remote memory or remote access to every piece of information the world has ever known doesn’t mean it’s yours. It’s not yours unless you’ve taken the time to actually learn it and load it into your brain, where you can understand it and think about it and manipulate it symbolically. So if we offload all of our memory and all of our knowledge into remote memories, as opposed to having it inside of our heads, I think we impoverish our ability to think and our intellectual life.

There’s a famous thing called the Fermi Paradox, from [scientist] Enrico Fermi, which says, why don’t we find intelligent life in the universe? The question is, is there a great filter, something that life can’t get past? And is it behind us, in which case we’re very fortunate, or is it in front of us, in which case we might be doomed?

And it just recently occurred to me that one of the filters we don’t hear about is the notion that every race, which is at its own need for comfort and its own desire to escape its own tough evolutionary past, in theory just builds the Matrix. It just builds a perfect world, where you just sit there and all you get is positive stimuli. You stop evolving and stop growing, and you disappear from the universe. You build a box, and you trap yourself in it.

I don’t think that’s the likely outcome, but I think we may be going through a multigenerational period where we really are going to have to figure out how to deal with these new media, because they don’t make us smarter.

For so much more with Landgraf, as well as a discussion with the acclaimed actor Jonathan Pryce, of Game of Thrones and the upcoming movie The Wife, listen to the full episode.

What should the media learn from the coronavirus?
The next challenge for plant-based meat: winning the price war against animal meat
America is now a Covid-19 hot spot
States and cities are imposing curfews to slow down Covid-19. Will they work?
Growing chicken is big business. So why are many farmers forced into debt they can’t pay off?
Trump praises India’s religious freedom while Muslim-Hindu violence erupts