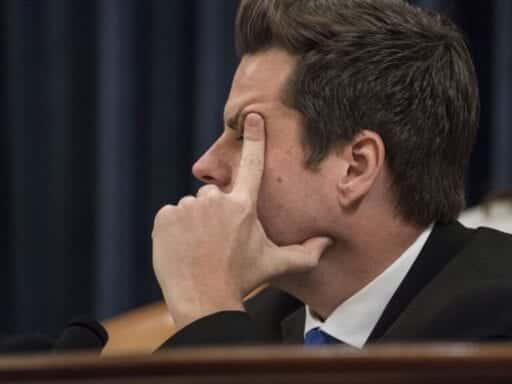 “I would say that the pot calling the kettle black is not something we should do,” Hank Johnson told him.

During Thursday’s impeachment hearing, Republicans on the House Judiciary Committee repeatedly tried to shift the focus from President Donald Trump’s apparent abuse of power to the Bidens — their goal being to establish that Trump had legitimate reasons to try and cajole the Ukrainian government into investigating one of his domestic political foes.

“There is clear evidence of wrongdoing between Hunter Biden, the former Vice President Joe Biden, and the Ukraine and the corporation Burisma,” Rep. Ken Buck (R-CO) said early during Thursday’s hearing, despite the fact that there is no such evidence; and even if there was, the US president doesn’t normally personally ask foreign governments to investigate individual Americans. “So the idea that there was a smear [of the Bidens] going on — let’s look at the facts.”

Rep. Matt Gaetz (R-FL) took this effort to a new level when he went out of his way to bring up Hunter Biden’s well-documented substance abuse issues. But his effort backfired when Rep. Hank Johnson (D-GA) pointed out that Gaetz, who was arrested for driving under the influence in 2008 (the case was later dropped), doesn’t have a leg to stand on when it comes to trying to score points on substance problems.

While introducing an amendment to the articles of impeachment that would replace a reference to “Joe Biden” with “Hunter Biden and Burisma,” Gaetz discussed how Hunter reportedly got into a car accident with a crack pipe in his rental car, and said “it’s a little hard to believe that Burisma hired Hunter Biden to resolve their international disputes when he could not resolve his own dispute with Hertz rental car over leaving cocaine and a crack pipe in the car.”

After Gaetz wrapped up, Johnson was recognized to speak. He immediately highlighted Gaetz’s hypocrisy.

“I would say that the pot calling the kettle black is not something we should do,” Johnson said, with people in the chamber audibly reacting as they pieced together what he was talking about. “I don’t know what members, if any, have had any problems with substance abuse, been busted in [a] DUI — I don’t know. But if I did, I wouldn’t raise it against anyone on this committee. I don’t think it’s proper.”

C-SPAN cameras captured an uncomfortable-looking Gaetz looking on as Johnson not-so-subtly called him out. Watch:

!!! After @mattgaetz brings up Hunter Biden’s drug problems, @RepHankJohnson alludes to Gaetz’s DUI and says, “the pot calling the kettle black is not something we should do. I don’t know which members, if any … have been busted in DUI. But if I did, I wouldn’t raise it.” pic.twitter.com/fHgxNUQ0Tg

But if you thought Johnson’s rebuke would be enough to prompt Gaetz to think twice about dredging up Hunter Biden’s personal problems again during Thursday’s hearing, you were quickly proven wrong. It took Gaetz about 30 minutes to again bring up Hunter Biden’s divorce and taste for expensive liquor as reasons it was “entirely appropriate” for Trump to ask a foreign government to investigate him.

This Republican gloss on Trump’s conduct is at odds with reality. “Corruption” never even came up on Trump’s July 25 phone call with Ukrainian President Volodymyr Zelensky, according to a summary of the conversation released by the White House, but Trump did repeatedly bring up his desire to see the Ukrainian government investigate the Bidens. Trump never used his executive authority to conduct an official review of corruption in Ukraine. Yet Republicans like Gaetz and Judiciary Committee ranking member Doug Collins (R-GA) insist that Trump’s real motivations weren’t so self-interested.

During a news conference held immediately after Thursday’s hearing went into an early afternoon recess, Collins told reporters that Trump “felt all along” that “corruption in the Ukraine is a problem.” But Collins was flummoxed when Manu Raju of CNN responded by pointing out that at no point during Trump’s two calls with Zelensky did he ever bring up corruption.

“He didn’t say ‘corruption’ in the call and he asked for an investigation of Joe Biden,” Raju pointed out.

Instead of addressing the point, Collins brusquely ignored it and moved on to taking a question from a different reporter.

.@mkraju: Is it the Republican position that Trump didn’t ask Ukraine for Biden investigations?

COLLINS: POTUS has always been concerned about corruption

R: But he didn’t say ‘corruption’ in the call. He talked about Bidens

Both the Gaetz and Collins episodes show how instead of defending what Trump actually did, House Republicans are trying to reimagine it in a manner indicating Trump actually had good faith concerns about corruption, not just his reelection prospects. But Trump did them no favors by going out of his way on Thursday morning to use his presidential platform to promote a business he still owns and profits from.

The 7 most dramatic, eye-popping moments from the Democratic debate in Las Vegas
Vox Sentences: State of Disunion
8 winners and 4 losers from Game of Thrones’ terrific “A Knight of the Seven Kingdoms”
How coronavirus is changing the ways we grieve and mourn the dead
NYT columnist Bret Stephens inadvertently explains why women don’t report sexual harassment
Early excerpts from President Trump’s 2020 State of the Union speech