Game of Thrones says goodbye to two of its biggest characters, badly 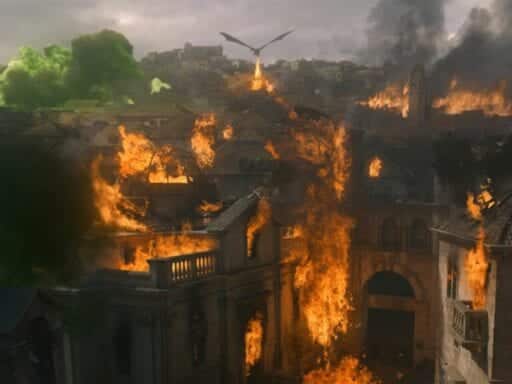 What the hell was that?

Game of Thrones season eight, episode five, “The Bells,” killed off two of the show’s most important and long-running characters: Jaime Lannister and Cersei Lannister. The siblings died in the same way they began the show — in each others’ incestuous arms — as the Red Keep collapsed onto their heads beneath the weight of Daenerys Targaryen’s dragonfire bombardments.

And I’ll be frank with you: The scene felt wrong to me.

At the beginning of Game of Thrones, Jaime and Cersei were not only lovers, but moral equals. As the series progressed, Jaime embarked down a path of redemption, eventually becoming a reformed man and a hero of sorts. Cersei, by contrast, swung even more into villainy — playing the role of evil genius for most of this final season.

For the two to die together, still in love, and as equals — with Cersei even sympathetically pleading for her life — feels like the wrong end for them, narratively speaking. Jaime’s death is a tragedy; Cersei has become such a monster that her death is honestly worth celebrating. The scene felt wrong.

Jaime and Cersei Lannister died as equals. They shouldn’t have.

Think about the last time Jaime and Cersei were together prior to this episode, at the end of season seven:

Cersei had just seen irrefutable proof that the undead were real, and that the Army of the Dead was coming for all of humanity. She told Daenerys and Jon Snow that she would send her forces to support them, but later revealed to Jaime that she was lying in a bid to weaken her human enemies and cement her hold on the Iron throne. Jaime was so disgusted by this plan, by playing politics with the future of the entire human race, that he departed King’s Landing in disgust — which is how he ended up joining up with Jon and Daenerys this season.

That was a break in their relationship, a sign that these two people had so profoundly changed that their connection could never be the same as it was. It was a moment that grew naturally out of seven seasons of character development, of Jaime learning to be a better person from Brienne while Cersei did things like seize power through a terrorist attack on a church.

Everything that has happened in season eight should have intensified this break. Jaime nearly died fighting the Night King’s army, while Cersei sat comfortably at King’s Landing. Jaime found another connection with Brienne, a woman who represented the best in him, while Cersei cruelly executed Missandei — precipitating Daenerys’s awful rampage through King’s Landing in “The Bells.”

Jaime spends the episode trying to prevent the massacre from happening, following Tyrion’s plan of trying to sound the bells to signal a surrender. The bells did indeed ring, and it’s possible (though not made fully clear) that Jaime himself rang them. But Cersei had apparently pushed Daenerys too far, while simultaneously packing in the population of King’s Landing to use them as human shields (thinking Daenerys far more scrupled than she actually turns out to be).

“The Bells” was an episode of horrors, horrors that Jaime tried to prevent and Cersei did her best to bring about — a perfect encapsulation of how the two characters have changed over the course of the show. If anything, it would have made sense for Jaime to kill Cersei, not try to escape with her.

And yet, everything about their final scene worked to put them on equal footing one last time. Jaime saying that they’re all that matters while the city burns around them. Cersei pleading for her life, as if she’s a scared little child rather than a vicious woman who bears responsibility for all of this. Even the visual language of Jaime and Cersei clutching each other, connected, suggests two people who are fundamentally one.

That’s not the end those characters deserved. Jaime earned a heroic death, Cersei a villain’s execution. I know Game of Thrones delights in flouting narrative conventions — and from that perspective, some viewers may find Jaime and Cersei’s deaths fitting. But this isn’t a case where it makes a lot of sense to me.

Jaime and Cersei’s story was one of a deep connection torn asunder by the harsh realities of the world, as well as of one person listening to their moral compass while another shattered it. For them to simply come back together again, as if none of that had ever happened, feels less like a subversion and more like Game of Thrones’ writers simply not understanding the story they’re telling.

The masterful deceit of “Toss a Coin to Your Witcher,” explained
House Democrats vote to repeal 9/11-era law used to authorize perpetual war
The best defense of Trump is still a damning indictment
The 20 best documentaries of the 2010s
Live results for Tuesday’s Florida primaries
Tucker Carlson on why conservatives should crack down on “vulture capitalism”