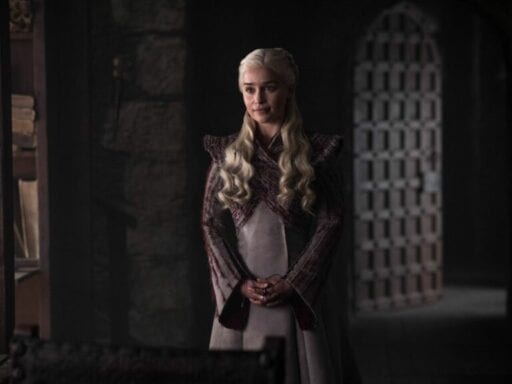 The episode’s musical Easter egg, “Jenny’s Song,” could be foreshadowing the end of Jon Snow and Daenerys Targaryen.

The second episode of Game of Thrones’ eighth and final season, “A Knight of the Seven Kingdoms,” contains a big Easter egg from the books the show is based on (fitting, since it aired on Easter Sunday), and it could be major foreshadowing regarding what the future holds for Jon Snow and Daenerys Targaryen, and which one may take the Iron Throne.

Toward the end of the episode, several knights — Jaime Lannister, Tyrion Lannister, Brienne of Tarth (who was knighted in this episode), Podrick (Brienne’s squire), Davos Seaworth, and Tormund Giantsbane — are drinking together when Tyrion asks the group to sing a song. They all decline except for Podrick, who begins to sing a somber tune.

The song also plays during the episode’s closing credits, where it is performed by Florence + The Machine.

In George R. R. Martin’s A Song of Ice and Fire novels, the song is known as “Jenny’s Song”; it’s about a woman named Jenny of Oldstones and her prince, Duncan Targaryen, who was Daenerys Targaryen’s great uncle. And it’s particularly pertinent to Dany’s current romantic situation with Jon Snow and her sights on the Iron Throne.

Duncan Targaryen gave up the Iron Throne for love — will Dany or Jon do the same?

The key to understanding “Jenny’s Song” lies within the Targaryen family tree. Daenerys had two brothers who are now deceased: Viserys was killed in season one’s “A Golden Crown,” and Rhaegar — who was also Jon Snow’s dad — died prior to the start of the series.

Their father was Aerys II Targaryen, a.k.a. the Mad King who was killed by Jaime “Kingslayer” Lannister. The curious thing though is Aerys II wasn’t actually the first in line in succession.

That would be Duncan Targaryen.

The TV show simplified and changed the Targaryen family line; Duncan is Aerys II’s brother on the show, and his uncle in the books. But essentially, all you need to know is that Duncan Targaryen gave up his claim to the Iron Throne.

He did so by marrying a woman named Jenny of Oldstones. This angered his family, who had planned a political marriage. On the TV show, Aerys II was next in the line of succession after Duncan was out of the picture (in the books, it was Aerys II’s father and then Aerys II). So if it wasn’t for Duncan putting Jenny above his claim to the Iron Throne, Aerys II may never have ascended to it.

At any rate, the song that Podrick sings about Jenny is not about the joy of Duncan and Jenny’s love. Instead it’s about love that was lost. Here are the lyrics, some of which are original to the show (in an “Inside the Episode” segment, showrunners David Benioff and Dan Weis said additional lyrics were added):

High in the halls of the kings who are gone
Jenny would dance with her ghosts.
The ones she had lost and the ones she had found.
And the ones who had loved her the most.
The ones who’d been gone for so very long
She couldn’t remember their names
They spun her around on the damp, cold stone
Spun away her sorrow and pain
And she never wanted to leave

In the song, Jenny is dancing with ghosts — specifically, the ghosts “who had loved her the most” in the “halls of the kings who were gone.”

This is a reference to what’s known in Martin’s books as Summerhall, a Targaryen castle and the site of a great a fire that, among others, killed Aegon V Targaryen alongside Jenny’s Prince Duncan — two of the ghosts that Jenny is presumably dancing with.

Game of Thrones has completely diverged from its source material at this point; the books spent a lot of time weaving “Jenny’s Song” into Rhaegar Targaryen’s (Dany’s brother and Jon’s dad) story and a prophecy (one that involves Rhaegar) about a savior, The Prince That Was Promised. And while the show has referenced that prophecy, it hasn’t really fleshed out Rhaegar’s story the way the books have.

But “Jenny’s Song” does still represent something important to the show.

Duncan and Jenny parallel what’s happening to Jon and Daenerys. At the end of “A Knight of the Seven Kingdoms,” Jon tells Daenerys what he learned from Sam last week: He’s actually a Targaryen, the son of Rhaegar Targaryen and Lyanna Stark. She acknowledges that if this is true, then he is the last male heir fo the Targaryen family, and heir to the Iron Throne. Thus, in order for either Jon or Dany to claim the Iron Throne, the other would theoretically have to give it up, perhaps out of love.

Looking ahead, it’s much easier to imagine Jon taking Duncan’s route than Dany, since Dany has long believed the Iron Throne is part of her destiny, while Jon sort of stumbled into his circumstances.

But we might be getting ahead of ourselves here.

To claim the Iron Throne means the Iron Throne must exist, something that will not be the case if Jon and Dany’s forces do not defeat the Night King, as well as Cersei Lannister, who’s waiting in the wings to swoop in with her army, the Golden Company. That’s where the sad part of “Jenny’s Song” comes in. The love of Jenny’s life, Duncan, is dead; even though he gave up his claim to the Iron Throne for her, (though his sacrifice is theoretically moot since he ultimately died alongside his father).

While either Dany and Jon may end up giving up their destiny for love, there’s no guarantee that they’ll both make it to the end of Game of Thrones alive. And if only one of survives, whatever sacrifices one or both of them make will be haunted by what was lost.