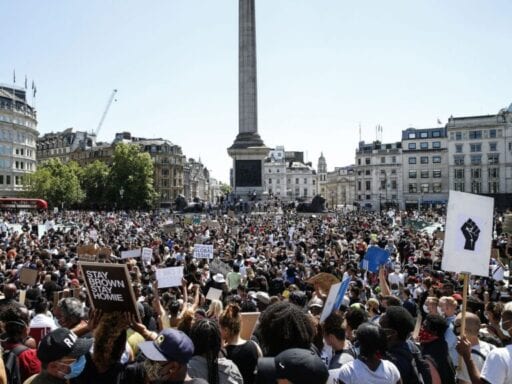 A demonstration in London’s Trafalgar Square on May 31 in response to the death of George Floyd. | Hollie Adams/Getty Images

Foreign leaders are also reacting to the turmoil in the United States.

As protests continue across the United States, the rest of the world is watching the chaos unfold in America’s cities, and is commenting on the systemic issues the demonstrations — and their inciting incident — reveal.

The death of George Floyd, a 46-year-old unarmed black man who died in Minneapolis, Minnesota, after a white police officer pushed a knee into Floyd’s neck for nearly nine minutes, has garnered international attention, as have the sometimes-violent protests that have erupted in the US.

Demonstrations in solidarity with Floyd protesters popped up in cities like London and Berlin, and world leaders, allies and foes of the US alike, have commented on the violence across the country.

Here is a look at how the world is reacting.

In the United Kingdom:

Hundreds marched in London on Sunday to protest the death of Floyd, defying the United Kingdom’s coronavirus lockdown restrictions that prohibit mass gatherings.

WATCH: Some pretty big crowds in London marching down Whitehall for #BlackLivesMatterUK protests.

Also a large crowd gathered outside the US embassy. #ICantBreath pic.twitter.com/HI5BQLN0ga

Demonstrators gathered in Trafalgar Square in London, kneeling in unison at 1 pm local time to honor Floyd. Protesters, some in masks, held up signs with slogans such as “Justice for George Floyd” and chanted, “Black Lives Matter.” Standing in solidarity with Floyd, some protesters also called out injustice and racism in the UK.

Hundreds gathered for #BlackLivesMatter protest at Trafalgar Square. Everyone kneeling, chanting ‘No justice, no peace’ ✊ pic.twitter.com/s6FO9Pl6yX

Some protesters marched through London to the US embassy there. Hundreds also marched in Manchester, UK, on Sunday — and more protests are expected in the UK this week.

Hundreds of people demonstrate outside US Embassy in London against death of unarmed black man George Floyd in Minneapolishttps://t.co/p7Td5zzOkz pic.twitter.com/zK10XuRLJ3

Protesters also surrounded the US embassy in Berlin on Saturday, the crowd chanting “Black Lives Matter.”

Thousands now chanting “black lives matter” in front of the US Embassy in Berlin #GeorgeFloyd pic.twitter.com/Jh65RKhTLo

Germans have surrounded the US Embassy in Berlin, protesting for America’s #BlackLivesMatter.pic.twitter.com/I7N9N5lr9b

Toronto also saw demonstrations on Saturday, which largely focused on Regis Korchinski-Paquet, a 29-year-old Toronto black woman who, according to police, fell from her balcony while police were at her home last week. Officers responded to a call about a “domestic incident” at her home on Wednesday night, but the circumstances leading up to her fall are unclear. An investigation is underway.

A group of Black Lives Matter demonstrators also gathered outside the US consulate in Milan on Thursday to protest Floyd’s death. A graffiti mural in Milan read “I Can’t Breathe,” a reminder of Floyd’s pleas to police.

World leaders have responded to the protests — including some authoritarian countries

Floyd’s death and the aftermath — the massive peaceful protests and the violence, both from within the crowds and the police — have laid bare, once again, the United States’ deeper structural problems with racism, police brutality, and injustice.

And world leaders are using these problems to address their own ends, with many allies seizing upon them to plead for a more just and equitable society, as adversaries highlight them to score propaganda points.

Canadian prime minister Justin Trudeau remarked on Floyd’s death and the protests at a press conference on Friday. “Many Canadians of diverse backgrounds are watching, like all Canadians are, the news out of the United States with shock and with horror,” Trudeau told reporters.

“Anti-black racism — racism — is real. It’s in the United States, but it’s also in Canada and we know people are facing systemic discrimination, unconscious bias and anti-black racism every single day,” said Trudeau, who added that Canada also had “work to do.”

Trudeau himself was embroiled in allegations of racism last year, after photos emerged of the prime minister wearing blackface and brownface. And protesters marched in Toronto over the weekend against racism, in protests that included calling for justice for Korchinski-Paquet.

Moussa Faki Mahamat, the chairman of the African Union Commission, which represents member states of the African Union, put out a statement that “strongly condemns the murder of George Floyd that occurred in the United States of America at the hands of law enforcement officers, and wishes to extend his deepest condolences to his family and loved ones.”

The statement added that Mahamat encourages the “authorities in the United States of America to intensify their efforts to ensure the total elimination of all forms of discrimination based on race or ethnic origin.”

UK Foreign Secretary Dominic Raab declined to directly address the protests or Trump’s response. “I’m not going to start commenting on the commentary or indeed the press statements that other world leaders make, or indeed the US president,” he told Sky News on Sunday. “Footage of what happened to George Floyd was very distressing, as has been the scenes across America of the rioting and some of the violence.”

He added that he wanted “to see the de-escalation of all those tensions and Americans come together.”

Keir Starmer, Labour leader and head of the UK opposition party, offered a more pointed suggestion; he tweeted Saturday that “George Floyd must not become just another name. His shocking death should be the catalyst for change.”

George Floyd must not become just another name. His shocking death should be the catalyst for change.

To build a better society we must stand together against racism and injustice.

Other UK lawmakers have also weighed in. Diane Abbott, a Labour lawmaker, wrote in the Huffington Post that Britain needed to learn from the US before it saw a tragedy similar to Floyd’s death. “Many of the issues that have made the situation in the United States so combustible exist right here in the British Isles,” she wrote.

Images of buildings burned and looted, images of police and protesters clashing, and images of journalists under attack by rubber bullets and tear gas, has also revealed, in some instances, an uncomfortable hypocrisy within the US on human rights and freedom of speech.

Authoritarian governments have seized on this disorder to try exploit it for domestic political gain.

Turkish president Recep Tayyip Erdoğan commented on Floyd’s death in a series of tweets. “The racist and fascist approach that led to the death of George Floyd in the US city of Minneapolis as a result of torture has not only deeply saddened all of us, but it has also become one of the most painful manifestations of the unjust order we stand against across the world.”

The racist and fascist approach that led to the death of George Floyd in the US city of Minneapolis as a result of torture has not only deeply saddened all of us, but it has also become one of the most painful manifestations of the unjust order we stand against across the world.

Erdoğan — who has purged the military and civil service of his perceived enemies, detained dozens of journalists, and led a targeted campaign against the Kurds — claimed that he would “continue to fight to protect the rights of all of humanity without any discrimination based on race, color, religion, language or faith.”

Iranian foreign minister Javad Zarif posted an obviously edited version of a US State Department press release, swapping the US in for Iran. US Secretary of State Mike Pompeo responded on Twitter by indicting Iran’s treatment of gay people, women, and Jews, but he did not address the US protests.

To those of us who do: it is long overdue for the entire world to wage war against racism.

Russia, which tried to stifle pro-democracy protests last year, also weighed in. “This incident is far from the first in a series of lawless conduct and unjustified violence from U.S. law enforcement,’’ the Russian Foreign Ministry said in a statement. “American police commit such high-profile crimes all too often.’’

And then there’s China, which seized on the US protests to push back on America’s stance on Hong Kong. This week, Pompeo declared Hong Kong no longer autonomous because of China’s encroachment on the territory, citing, among other things, the use of tear gas and mass arrests against peaceful demonstrations. This declaration suggested the city would lose the trade advantages that have helped make it an economic center — and indeed, on Friday, President Donald Trump announced the US would revoke Hong Kong’s special trade status because China was “absolutely smothering” Hong Kong’s freedoms.

China has been relatively quiet on the move, but on Saturday, Hua Chunying, a Chinese foreign ministry spokesperson, responded to a tweet from the US State Department spokesperson about Hong Kong with: “I can’t breathe.”

Hu Xijin, the editor of the state-run Global Times, also tried to draw parallels between the unrest in the US and the unrest in Hong Kong. “Go talk to demonstrators seriously,” he wrote on Twitter, addressing Trump. “Negotiate with them, just like you urged Beijing to talk to Hong Kong rioters.”

Mr. President, don’t hide behind the Secret Service. Go to talk to demonstrators seriously. Negotiate with them, just like you urged Beijing to talk to Hong Kong rioters. pic.twitter.com/nTOnO0sptk

Even as countries are still battling the coronavirus pandemic, Floyd’s death and its aftermath have resonated worldwide, leading to peaceful expressions of solidarity, alongside the opportunism. The response has been a powerful reminder that a number of other countries grapple with ugly legacies, but also that the US — despite having ceded some of its leadership roles — remains a nation watched by others for both its successes and failures.