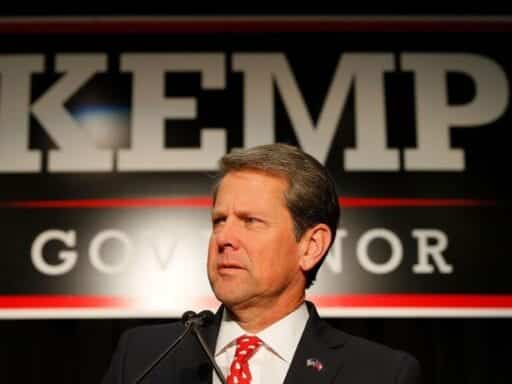 It’s far from clear what happens if they succeed.

Georgia Supreme Court Justice Keith Blackwell’s six-year term expires at the end of this year, and the state is supposed to hold an election in May to choose his replacement.

Then something bizarre happened. And one of the central players in this narrative is the Republican governor who is widely viewed as an enemy by the voting rights community, due to credible allegations that he engaged in voter suppression that tilted the state’s 2018 gubernatorial race in his favor.

In late February, just a few days before the deadline for candidates to replace Blackwell to file to run in the May election, Blackwell sent a letter to Republican Gov. Brian Kemp, announcing that he intends to resign from the state Supreme Court effective November 18 — a few weeks before his term was scheduled to expire on December 31. (The May election is intended to choose a new justice who will take office after Blackwell’s term expires.)

Then, on March 1, Kemp’s office informed the state’s Republican secretary of state, Brad Raffensperger, that the governor intends to appoint someone to replace Blackwell — that appointment would presumably take effect on November 18, when Blackwell steps down.

In response, Raffensperger, the state’s top elections officer, decided to cancel the May election. Raffensperger’s lawyers claim that the governor’s appointments power kicked in as soon as the governor accepted Blackwell’s resignation — although it is not at all clear why the governor could appoint someone to serve beyond the remainder of Blackwell’s term.

If the May election does not happen, the result could be chaotic, as it’s far from clear who, if anyone, would occupy Blackwell’s seat after the departing justice’s term expires on December 31.

Canceling the election appears to be unconstitutional

As a constitutional matter, Raffensperger’s decision to cancel the election is highly dubious. The Georgia Constitution provides that “all Justices of the Supreme Court and the Judges of the Court of Appeals shall be elected on a nonpartisan basis for a term of six years.” Though the governor may appoint people to the state Supreme Court when a vacancy arises, such an appointee typically “shall serve for the unexpired term” of the person they were appointed to replace.

So, while Kemp almost certainly can appoint someone to replace Blackwell, that replacement would serve from November 18 to December 31 of this year — and that’s it. The May election is intended to fill the seat beginning on January 1 of next year.

There’s also a more basic reason why Raffensperger’s decision seems to be at odds with the state constitution. Yes, the governor has the power to fill vacancies on the state Supreme Court, but Blackwell’s seat is not vacant. Blackwell still occupies that seat. He is currently performing the duties of a justice on the court, and he intends to do so until November 18.

As John Barrow, a former Democratic member of Congress who intends to run in the May election, argues in a lawsuit seeking to reinstate that election, “the fact that a vacancy may occur between the election date and the date on which the winning candidate is to be sworn into the position provides no basis to refuse to hold the election at all.”

In fairness, there is a fairly technical argument that Blackwell’s seat should be “deemed vacated,” even though Blackwell is still a state Supreme Court justice. A Georgia state law provides that “all offices in the state shall be vacated … by resignation, when accepted.” Kemp sent a letter to Blackwell formally accepting his resignation on February 26.

But even if Kemp does have the power to name a replacement for Blackwell right away, instead of waiting until Blackwell actually leaves the court, it’s not at all clear what happens on January 1. Kemp’s appointments power appears to be limited to the power to fill Blackwell’s seat until December 31. If no election takes place before that date, there will be no one to fill the seat at the beginning of 2021.

Perhaps Kemp will argue next January that the seat is, once again, vacant — and that he has, once again, gained the power to fill that seat. But that seems like an end run around his state constitution. Again, that constitution provides that “all Justices of the Supreme Court and the Judges of the Court of Appeals shall be elected.” It only gives the governor the power to fill a vacancy if an elected justice leaves their post midway through their term.

Kemp is a notorious figure among voting rights advocates

One reason why this effort to cancel an election is potentially alarming is that Gov. Kemp was credibly accused of effecting changes in the voting system that benefited him while he held Raffensperger’s job.

In 2018, Kemp simultaneously served as Georgia secretary of state — again, the state’s chief elections officer — and ran as the Republican candidate for state governor. That was, itself, a remarkable conflict of interest.

In that role, Kemp’s office purged more than a million names from the state’s voter rolls. He also placed about 53,000 voter registration applications on hold because they ran afoul of an “exact match” law that required information on voter registration forms to precisely match information on file with the state’s Department of Driver Services and the Social Security Administration.

Thus, for example, if a hypothetical voter was listed as “Tyrone Williams-Smith” on a voter registration form, and “Tyrone Williams Smith” (without a hyphen) in the state’s driver services records, that could be enough to deny this person the right to vote. An Associated Press analysis determined that 70 percent of the voters affected by this policy were black.

A federal judge eventually ordered the state to relax this policy.

Similarly, just days before the 2018 election, Kemp accused the state Democratic Party — without any evidence to support this claim — of attempting to hack the state’s voter registration system.

Kemp eventually won his race over Democratic candidate Stacey Abrams by a narrow margin of about 55,000 votes.

A Georgia state judge heard Barrow’s lawsuit, as well as a similar suit brought by Barrow’s Republican opponent Beth Beskin, on Friday. The judge says she plans to hand down a ruling early this week.

India’s coronavirus lockdown and its looming crisis, explained
3 days, 5 transcripts: What we’ve learned from recently released impeachment depositions
2 winners and 4 losers from Trump’s 2020 reelection campaign launch
How Washington state primaries reflect the perilous position of the national GOP
The best $149 I ever spent: A FitBit to monitor my heart rate
Did Bernie Sanders underperform in New Hampshire?