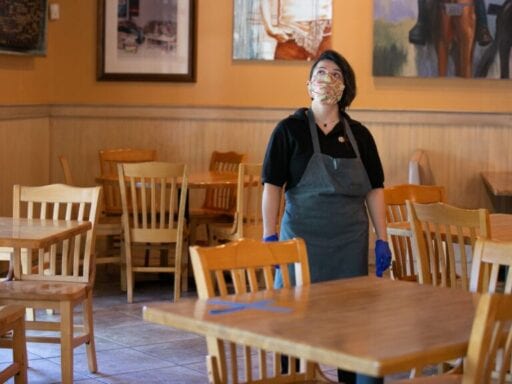 Georgia has corrected data that appeared to show a misleading decline in cases.

Amid misleading claims from President Donald Trump about testing capacity and concerns about the effects of the reopening of nonessential businesses, a number of states are facing criticism for poor reporting of their testing data — a problem that makes it more difficult for both lawmakers and the public to understand how the pandemic is affecting their states as they work to make informed public health choices.

The issue has been particularly notable in states that have reopened, like Georgia and Virginia, but has affected others as well — and has been seen on the federal level, with some noting Centers for Disease Control (CDC) testing numbers do not match up with those shared by states.

Georgia’s Department of Public Health has been criticized in particular for sharing misleading data. Last week, it corrected a graph on its website that appeared to show confirmed case counts decreasing (shown below); the data, however, was not arranged in chronological order. The x-axis of the graph was not ordered chronologically, a method that caused the highest values to be clustered on the left, and the lowest on the right, regardless of when those values were recorded.

Georgia has struggled with presenting data in a clear and accurate way before, the Atlanta Journal Constitution notes, like when it changed the scale used in a heat map of the state’s counties, a modification that made it appear that counties had fewer cases than they actually did or when the department released a daily confirmed case count that was impossible based on the number of tests conducted.

Adding to the confusion is the fact that some of its data is tallied in a manner different than most other states and countries. In hopes of providing a picture of exactly when changes in spread rate began, the state backdates positive test results to the day the infected person says they first became symptomatic. For a time, this meant some of the department’s case count graphs were constantly shifting, as confirmed cases for days already past increased.

To make this policy more clear, the state’s newest graphs feature a “14-day window” — based on the amount of time it can take for symptoms to manifest — that makes it clear recent data is subject to change.

State officials have blamed these missteps on an outside vendor, and Gov. Brian Kemp’s office has claimed it is not pressuring the Department of Public Health to provide data supporting Kemp’s decision to reopen nonessential businesses.

“We are not selecting data and telling them how to portray it, although we do provide information about constituent complaints, check it for accuracy, and push them to provide more information if it is possible to do so,” Kemp’s communications director Candice Broce told the Journal-Constitution.

Critics of the state’s statistical work have expressed concern that something more than general ineptitude is behind the muddled data.

“I have a hard time understanding how this happens without it being deliberate,” Democratic state Rep. Jasmine Clark told the Journal-Constitution. “Literally nowhere ever in any type of statistics would that be acceptable.”

Georgia is striking for the number of times it has been criticized for its data — and the fact that misleading numbers are being presented to its citizens as they weigh how fully they should engage with their state’s reopening: At the moment, stores, gyms, salons, and movie theaters are among the businesses that have been allowed to reopen. Georgia isn’t alone in its problems with reporting information however; other states have had problems sharing data that has obscured the reality of the situation on the ground.

For instance, until last week, Virginia combined its viral and serological test results. That decision was criticized by public health experts like Ashish Jha, director of the Harvard Global Health Institute, who told the Atlantic, “It is terrible. It messes up everything.”

The merging of the two test results leads to misleading figures because the viral tests simply show whether a person is infected and is at risk of spreading Covid-19, while serological tests show whether a person has antibodies meant to fight off the coronavirus. Mixing the two may seem like a way to get a broad picture of how many people have and have had Covid-19, but the sum does little to illustrate how many people are infected right now — information badly needed by both lawmakers and the public, particularly in states like Virginia that are reopening nonessential businesses.

And of course, the federal government has not been immune to sharing uncertain data either. For months, the CDC did not have comprehensive testing data available on its website. The agency is now reporting more comprehensive data, but an analysis by the magazine found the CDC’s state-by-state testing data does not align with the data reported by the states themselves. The Atlantic’s Robinson Meyer and Alexis C. Madrigal write:

In Florida, they note, the CDC shows more than 200,000 more tests than the state’s total. What’s behind these discrepancies is unclear: It could involve several factors with differing data collection practices, including whether agencies count multiple tests given the same person as one test or multiple.

Similarly, what is causing opaque data at the state level is muddled. It is true states promoting the reopening of nonessential businesses would seem to have incentive to share data supporting that choice (particularly given that federal guidance suggests a 14 day decline in cases before reopening is attempted) but it isn’t definitely clear that any state errors are malicious — they could be the result of sloppiness or poor science.

Even if all of the data were perfect, everyone — lawmakers, public health officials, and the public — would an incomplete picture of what is going on. There’s been an uptick in testing, but not every American who wants, or needs, a test can get one, and the fact that symptoms don’t manifest immediately means even once testing is scaled up, some infected people won’t be accounted for — at least not immediately. Which is why it is important the data we do have be correct: Decisions on reopening and other policies need to be made based on incomplete information, and it is better to have as much as possible to make informed choices.

What it’s like to interpret for coronavirus patients remotely
3 things you need to know about the coronavirus today
SNL’s cold open spoofed the Super Bowl preshow — and the game’s awkward ads
Why MoviePass is the future — even if it doesn’t survive
Vox Sentences: Should Harvard profit from photos of slavery?
A fight over metal detectors reveals how broken Congress really is