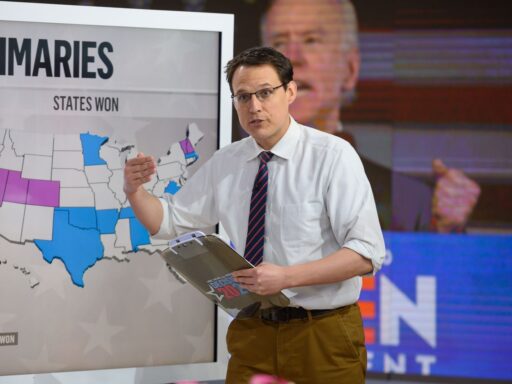 America’s boyfriend is back to rekindle the nation’s crush on him (and explain the final 2020 Senate races).

There are very few instances in which I, a young person, will choose to watch network television. The exception, as of late, is to follow election coverage: During the presidential contest, my eyes stayed glued to MSNBC’s flashing graphics as journalist Steve Kornacki zoomed in and out on an oversize map, doing hypothetical math to calculate the candidates’ odds of reaching 270 electoral votes. The good news for Kornacki fans is that he’s back — this time to explain the results of the Georgia runoff elections.

Kornacki is not the only map dude on air (he’s a national political correspondent during non-election times), but according to the internet and my colleagues at The Goods, he is the most attractive to watch. And on the night of November 3 — in which I needed as much comfort as possible — I switched streams from NBC (sorry not sorry, Chuck Todd) to MSNBC without a second thought. Now, during the races that will determine whether Republicans or Democrats hold the majority in the US Senate, Kornacki will once again deliver assurance to those who seek it.

In November, as the hours of election night dragged on, viewers began pointing out how Kornacki’s nerdishly disheveled energy was oddly soothing. He was always present even during breaks, on the corner of the screen dubbed the “Kornacki Cam.” His resilience was so astounding that people began to develop an unforeseen crush on the 41-year-old, whom some fans jokingly dubbed “Map Daddy,” as Kornacki engaged in the most unsexy activity of all time: explaining electoral math for hours on end. And in the rosy afterglow of the election, Kornacki was offered (and accepted) a gig analyzing NFL playoff scenarios for NBC Sports.

happy steve kornacki day to all who celebrate

As a society, we have loved watching conventionally attractive people onscreen since the advent of films, but Kornacki doesn’t look like your typical movie star. His on-air outfit is similar to that of a college professor who’s just made tenure: white dress shirt with rolled-up sleeves, glasses, khakis, and striped tie. Under regular circumstances, Kornacki’s wonky aura might fade against the likes of David Muir and Anderson Cooper, broadcasters with chiseled jaws and distinguished features. This was election night, though, and Steve Kornacki was the reliable man many turned to for the most up-to-date information on the state of the race.

That infatuation only magnified in later days, as viewers anxiously awaited vote updates from key battleground states. On Twitter, fans put together Kornacki fancams — short, pink-hued videos of the journalist in action overlaid with sparkle effects and catchy pop tracks. CNN’s John King was another favorite, but more viewers seemed to consider him a benevolent father type rather than an out-and-out thirst object. The two men fast-tracked their way to internet fame by virtue of explaining electoral maps to a very confused, very anxious public.

Some have argued that this collective Kornacki obsession is reflective of our anxiety-ridden reality: People have developed a mild crush on this bespectacled 41-year-old gentleman (who happens to be gay) as a sort of emotional coping mechanism for 2020’s political turbulence. For some, that crush remained dormant. The Georgia runoffs likely won’t take as long to be called as the presidential race, and as the moment of national uncertainty likely begins to abate, so too will our fleeting feelings for Kornacki. Perhaps he’ll return to be Twitter’s boyfriend in another four years’ time, but until then, let’s hope Kornacki gets some actual rest and relaxation.

Jeff Sessions might have just lost his most important supporter: the Senate
Jesse Pinkman’s future looks bleak — but beautiful — in Netflix’s Breaking Bad: El Camino trailer
Is Watchmen too confounding for its own good?
“Human challenge trials,” where healthy volunteers would be exposed to Covid-19, explained
How the Covid-19 pandemic will leave its mark on US health care
What we know about a reported hunger strike by fathers in immigration detention