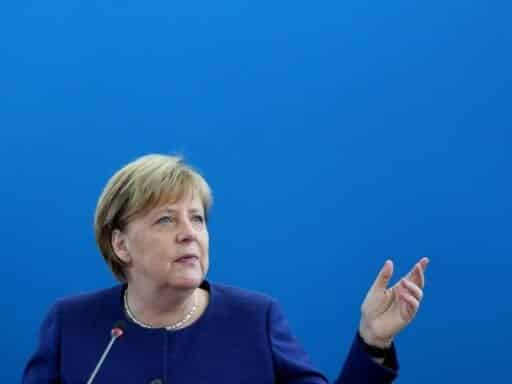 The results of the elections in Bavaria have put pressure on her coalition.

Voters in the German state of Bavaria went to the polls this weekend and dealt a serious setback to German Chancellor Angela Merkel.

The elections this Sunday in the southern German state were considered critical for Merkel and her fragile governing coalition. The state’s largest party, the Christian Social Union (CSU), managed to cling to first place in the elections with a little more than 37 percent of the vote, but lost their absolute majority and saw their most bruising results in more than half a century.

This was a blow to Merkel, since the CSU is the sister party to her center-right Christian Democratic Union (CDU). But another member of Merkel’s governing national coalition, the center-left Social Democrats (SPD), also saw its support absolutely cave in the Bavarian elections, putting them in fifth behind with just less than 10 percent of the vote.

The losses for the major parties in Bavaria meant that smaller parties made big gains. Germany’s anti-immigrant far-right party Alternative for Deutschland (AfD) secured double-digit support — about 10.2 percent of the vote — and further established itself as a political force.

But when it came to smaller parties, the biggest gains went to the Greens — a left-wing party that’s pro-immigrant, pro-Europe, and pro-environment. The part came in second place with 17.5 percent of the vote on Sunday, putting the party on its way to becoming one of the biggest political forces on the left in the region.

Both the Greens and AfD’s successes — along with the damages to the long-established center-right CSU and center-left Social Democrats — reveal the cracks within German politics.

“You see the hollowing out in Europe of the center, and political fracture and fragmentation,” Heather Conley, director of the Europe Program at the Center for Strategic and International Studies (CSIS), told me. “Bavaria is the perfect snapshot.”

Why the Bavarian elections matter — and what’s next for Merkel

The outcome of the Bavarian elections has consumed German politics for months. The wealthy, southern German state tends to lean conservative but also has a reputation for bucking political conventions.

Immigration had become a headlining issue in the elections, and leaders in Bavaria — specifically German Interior Minister Horst Seehofer, who is the leader of the CSU — had been agitating against Merkel’s open-door immigration policy and pushing for tighter border controls and changes to its policy on asylum seekers.

This revolt within Merkel’s government was largely seen as an attempt to push her government further to the right and appeal more to voters flirting with the AfD party, which is virulently anti-immigrant and appeared to threaten the CSU’s stronghold in Bavaria.

But the Bavarian elections on Sunday — which saw a turnout of more than 70 percent — told a somewhat more complex story.

The major center-right party, the CSU, and the major center-left Social Democrats both suffered. Voters decamped to more marginal parties, bringing them solidly into power or expanding their representation.

AfD did make inroads into the state government, securing 22 seats. But the controversial far-right party came in in fourth place. It has now secured representation in all but one German state (and that’s likely to become all states with elections in Hesse, at the end of the month). The far-right party’s gains help chip away at Merkel’s coalition — something one of the AfD leaders was quick to point out — but in one of Germany’s more conservative states, its success was not as dramatic as in other parts of the country.

The AfD’s performance also showed that the CSU’s gamble — to veer to the right on immigration — might not have totally paid off. Approximately 200,000 CSU voters defected to the left-wing Greens, according to the German outlet DW, and in total, the CSU lost slightly more voters to the Greens than the far-right AfD.

The Greens gained “because as the CSU went far right, they lost their center,” Conley said. “And the center went to the Greens.”

The result was a second-place finish for the Greens. The party won 38 seats in the Bavarian parliament. It’s a sign, also, that immigration might not have been the top issue driving voters. The environment, education, and affordable housing also swayed voters, said Sudha David-Wilp, a fellow at the German Marshall Fund.

But the ascendance of the Greens and other smaller parties meant that the center-left party, the Social Democrats, got absolutely clobbered. The party came in a truly embarrassing fifth place, and will drop from 42 to 22 seats in parliament. It was the party’s worst election results in the state ever.

And this is where the real problem lies for Merkel. The CSU losing its stronghold and the Social Democrats just flat-out losing once again reveal the fragility of Merkel’s governing coalition.

Just to recap: Germany had national elections in September but struggled to form a government. Merkel and her CDU party won, but gains by smaller parties — including the far-right AfD — meant that it could not govern alone.

After nearly six months of uncertainty, the center-left SPD voted to join in a “grand coalition” with Merkel’s party, ending the political stalemate.

But while Merkel is still relatively popular both inside and outside Germany, said David-Wilp, there’s growing dissatisfaction with this governing structure around her.

“People are also realizing she used this crutch of this ‘grand coalition’ — the joining together of the two major parties —so people feel like they don’t have any political options,” said David-Wilp. “The two major parties blend together. Traditionally they’re supposed to be opposing forces.”

And that’s why these parties on the fringes are resonating with voters — it’s the alternative (literally, in the case of the AfD, as David-Wilp pointed out) that voters are craving.

The CSU got beaten up, though it will still be able to successfully form a governing coalition in Bavaria (courtesy of the Free Voters, a small conservative party that gained seats but isn’t a player in national politics).

But the SPD’s battering in Bavaria may have it rethinking its alliance with Merkel and the CDU on the national level.

“It would seem we were unable to convince the electorate, and that is bitter,” said Andrea Nahles, the SPD leader, after the election results. “Certainly, one of the reasons why we did not do well in the elections is the poor performance of the grand coalition here in Berlin.”

”One thing is sure,” she added. “This needs to change.”

Should the Social Democrats decide they’re out, it won’t be a risk-free move. Destabilizing the government might not exactly stem the party’s slide — especially if they leave before the end of the legislative session.

Merkel tried to reassure voters after the Bavarian election results. “My lesson from yesterday is that I, as chancellor of this ‘grand coalition,’ must do more to ensure that this confidence is there and that the results of our work are visible,” she said. “And I will do that emphatically.”

Merkel and her “grand coalition” will probably be stuck in limbo until the regional elections in Hesse at the end of October, where her CDU party will be on the ballot along with the Social Democrats. Strong showings there might keep her coalition pasted together, though polls suggest that’s not likely and both parties are poised to lose support.

“That will continue to place pressure on Social Democrats to make a decision whether they can continue on in this government or not,” Conley said. “And I think they’re going to come to a conclusion — sooner rather than later — that they cannot continue.”

CSAs for the 1 Percent
2 winners and 3 losers from night 2 of the RNC
Trump’s spent years touting the stock market. At the RNC, he just … didn’t.
Crazy Rich Asians is shaping up to be one of 2018’s biggest success stories
Average body temperature appears to be dropping. Researchers aren’t sure why.
The demand for midwives is surging. Here’s why I made the switch to home birth.