Gerrymandering is bad for democracy. The new doc Slay the Dragon shows how to fight it. 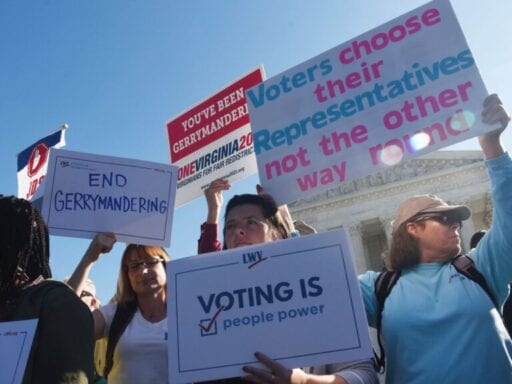 A story of grassroots victory anchors the unexpectedly inspiring film.

The premise: Gerrymandering is eroding our democracy. But Slay the Dragon tells a story that shows citizens can fight it.

What it’s about: Gerrymandering is a complex thing to do, but it’s not too hard to understand. As the film explains, in about 80 percent of states, the state legislature creates the maps of voting districts in their state. The ruling party is able to design a map (with the help of specialists) that ensures it will retain power. It does this by creating as many districts as possible that contain voters likely to vote for their party, while making sure areas with high concentrations of opposition voters are herded into districts together. Thus, the ruling party can virtually ensure its own continuing majority status, while diluting the votes of constituents likely to vote for the opposing party. (If that doesn’t make sense, check out this helpful Vox video!)

As both the video above and Slay the Dragon demonstrate, this can result in bizarre-looking districts that make it fairly obvious even to the average citizen that something fishy is going on. And most of this map-drawing happens in strict secrecy, behind closed, barred, nondisclosure-agreement-protected doors — not exactly promising for those who believe in an open and free society.

Gerrymandering isn’t a particularly sexy topic, and it involves a lot of numbers and weirdly drawn lines on maps, which doesn’t make it an obvious candidate for a gripping film. But Slay the Dragon expertly and methodically does two things especially well.

First, Slay the Dragon explains the origins of gerrymandering, the results of the practice, and how American politics, particularly since 2008, have been affected. Though both Republicans and Democrats have engaged in gerrymandering when they’re in power, most gerrymandered states are currently in the hands of Republicans. The film is especially attentive to the resources that Republicans have invested in redistricting, in ways that have all but ensured Republican victories even in places where the demographics are obviously changing (often coupled with voter suppression efforts such as voter ID laws, voter purges, and the rollback of initiatives to make voting more accessible to all citizens, particularly African Americans). All of these moves are substantiated by interviews with experts, journalists, historians, Democratic and Republican lawmakers and former lawmakers, and in some cases the professional redistricting experts themselves.

But Slay the Dragon isn’t a glorified PowerPoint presentation about the history of voting. It’s an unabashed activist documentary aimed at convincing viewers they can fight gerrymandering in their home states. So it frames all of this information within the inspiring story of the Michigan-based organization Voters Not Politicians, which during the 2018 election succeeded, against enormous odds, in ending gerrymandering in Michigan. Led by Katie Fahey, a 20something who had never worked in politics before, Voters Not Politicians fought to get an initiative on the ballot to appoint a citizens’ commission (consisting of four Republicans, four Democrats, and five independents) to draw electoral district boundaries.

Fahey and her fellow activists soon found themselves up against a well-oiled and well-funded machine unwilling to give up control over districting to a commission of non-politicians. They aren’t the first or the last group to win and eliminate gerrymandering, but their story is particularly moving — a tale of a grassroots effort that actually paid off.

That makes Slay the Dragon a rather thrilling and hopeful watch, particularly in an election year while the world is roiling with uncertainty — not to mention a census year, the results of which could change the way voters are divided into districts once again in many states. And it presents a strong argument against the practice altogether: In a democracy, voters ought to get to pick their legislators, not the other way around.

Critical reception: Critics have been largely positive about Slay the Dragon. At the Hollywood Reporter, John DeFore writes, “As much doom as we get here, Goodman and Durrance find widespread cause for optimism as well — in groups of citizens who launch ballot initiatives or sue their states directly over maps designed to make their votes pointless.”

How to watch it: Slay the Dragon is available on a variety of cable and on-demand services; check the film’s website for more information.

Activists want to turn Brett Kavanaugh’s nomination into another health care debate
3 things to know about Ireland’s elections Saturday
The other infectious diseases spreading in the shadow of the pandemic
Why people are being released from jails and prisons during the pandemic
How Congress can permanently disqualify Trump from office after impeachment
The growing scientific evidence for masks to fight Covid-19, explained