Gillibrand: “If standing up for women who have been wronged makes George Soros mad, that’s on him” 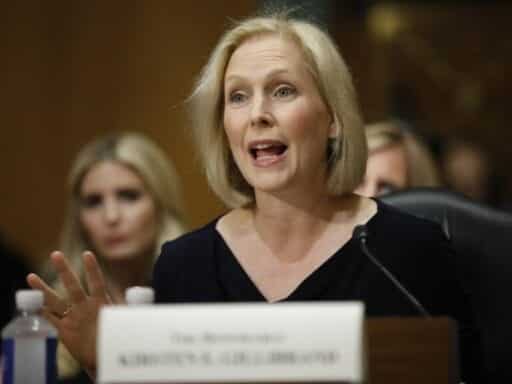 The senator finally responds to his June attack.

In a June interview with the Washington Post, longtime Democratic donor George Soros blamed Sen. Kirsten Gillibrand for Sen. Al Franken’s resignation, and suggested that she pushed for the Minnesota lawmaker to step down to advance her own political aims. At the time Gillibrand declined to comment. On Wednesday, however, she didn’t pull any punches in a withering response to Soros — who has also said he hopes she doesn’t get the Democratic nomination in 2020.

“If standing up for women who have been wronged makes George Soros mad, that’s on him,” Gillibrand told HuffPost in a statement. “But I won’t hesitate to always do what I think is right. For nearly a year, we have seen countless acts of courage as women and men have spoken hard truths about sexual assault and sexual harassment and demanded accountability.”

Soros and some other Democratic donors view Gillibrand’s calls for Franken to resign as an opportunistic move aimed at raising her profile and setting herself up for a presidential run. (She was one of the earliest lawmakers to speak out, but not by much.) In his remarks to the Washington Post, Soros placed the onus for Franken’s departure on Gillibrand’s efforts — a view that many have argued is sexist.

He blames Gillibrand for pushing the resignation of former senator Al Franken “whom I admire,” Soros said, “in order to improve her chances.”

The Soros view here is so popular among Dem male donors and lawmakers. Few say it publicly, but in DC I’d hear it all the time from supposedly liberal men: Franken as a martyr and Gillibrand as “opportunist”

While Franken’s resignation has attracted both significant attention and backlash, it’s also far from the first time that Gillibrand has been vocal about combatting sexual harassment and assault — issues she’s been working on for years.

Gillibrand’s stance on Franken — and her comments on Bill Clinton — are among the developments that have forced an internal reckoning within the Democratic Party about its position on sexual misconduct. As Vox’s Laura McGann writes, many members of the party are still grappling with Franken’s departure, conflicted about holding themselves to a higher standard compared to Republicans.

Gillibrand has pushed for the Democratic Party to adhere to the values it has so often touted about gender equity even if it means the downfall of one of their own. “It is clear that we must put our morals and the valuing of women ahead of party loyalty,” she said in her recent statement. “When someone does something wrong, you have to speak up and be counted, whether it’s President Trump, or a Democratic colleague.”

At an event earlier this year, Gillibrand emphasized that there was no way for her to reconcile her long-standing work pressing for accountability on the issue of sexual harassment while giving her colleague a pass.

“The challenge for me personally was [Franken] had eight allegations against him, seven of them credible,” she said, adding, “The eighth [woman] happened to be a House staffer. … If I can’t stand up for someone who works in my own place of business, who can I?”

“I miss my friends a lot”: 5 students on the uncertainty of school openings
Dissecting the megapopularity of the Frozen movies with a 5.25-year-old
The best money we’ve ever spent on other people
How Awkwafina established her dramatic bona fides without disrupting her star image
Former Google employees who say they were fired for organizing are filing labor charges against the ...
Poll: Bernie Sanders does well with Latinos — but not in Florida