GM and striking workers are losing millions of dollars a day. Here’s why the strike isn’t over. 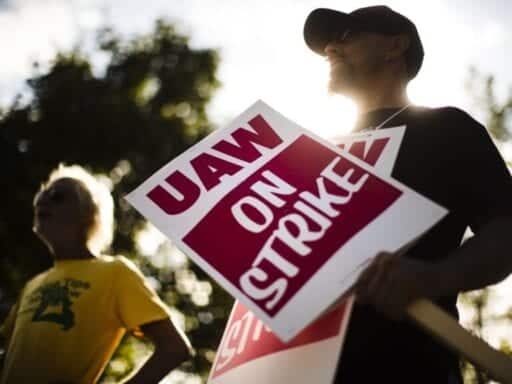 Employees want General Motors to accept that the Great Recession is over.

General Motors is losing $90 million a day, and thousands of auto workers are draining their savings. Yet there’s no end in sight for the longest auto workers’ strike in decades.

As the GM strike enters its fourth week, company officials and union negotiators are still fighting about wages, retirement benefits, and the fate of an idled Chevy factory in Lordstown, Ohio. Nearly 50,000 workers are still on strike, picketing outside GM factories across the US.

While both sides have made some progress during the contract talks — union leaders say employee health insurance premiums won’t go up, and they’ve created a path for temporary factory workers to get permanent jobs — bargaining over pay and job security got so heated over the weekend that it spilled into the public.

“You didn’t even have a professional courtesy to explain why you could not accept or why you rejected our package proposal for each item we addressed,” Terry Dittes, director of the United Auto Workers union at GM, wrote in an email Sunday to company management, which he then posted online. “We expect the Company to respond and discuss the package proposal we presented yesterday. The law and basic decency require no less.”

A spokesperson for GM declined to comment Tuesday on the dispute but gave the following statement to Vox: “We continue to negotiate in good faith with very good proposals that benefit employees today and build a stronger future for all of us. We are committed to continuing discussions around the clock to reach a resolution.”

The outcome of the negotiations has the potential to extend far beyond GM factories. The contract will lay the foundation for upcoming union talks with Ford and Fiat Chrysler too. And what workers get from in the deal will reflect how much bargaining power US factory workers have in an era of globalization.

When negotiators returned to the bargaining table on Monday, one of the main unresolved issues involved how much to shorten the time it takes for a new worker at GM to reach full pay, according to the Wall Street Journal. Right now, new employees start out making about $17 an hour, and it takes eight years of gradual raises to reach the full $30 base pay. The two sides are also at odds over whether the company should increase contributions to workers’ retirement accounts.

But perhaps the most sensitive issue on the table involves the future of the Lordstown, Ohio, factory that once produced the Chevy Cruze.

During the recent negotiations, GM reportedly promised to build electric car batteries at a factory near the Lordstown plant, according to Bloomberg. (It’s also agreed to build an electric truck in the Detroit factory that the company planned to close in January.) The union wants more than just a battery factory in Ohio, because it would only employ a few hundred people at lower wages.

The UAW wants GM to build a new car in Lordstown, even if it means moving the assembly of the Chevrolet Equinox, Blazer, and GMC Terrain SUVs from a factory in Mexico. Right now, GM can pay workers a few dollars an hour in Mexico to build the cars — so neither side seems willing to budge.

The strike is hurting GM, and striking workers

Without a doubt, the strike is having a huge effect on the company’s bottom line. It has essentially stopped production at more than 30 GM factories and slowed production for auto-parts suppliers in the US and Mexico. Thousands of non-union factory workers in Mexico and the US have been temporarily laid off as a result.

Meanwhile, car dealers are struggling to get replacement parts to fix vehicles, forcing customers to wait weeks for service. That’s costing GM anywhere from $50 million to $100 million a day from lost factory production.

These losses are climbing by the day, writes Patrick Anderson, CEO of the Anderson Economic Group, a Michigan research firm specializing in the auto industry. He estimates that GM has lost $660 million during the first three weeks of the strike, and the costs will keep going up as they impact more dealers and parts suppliers. “We’re looking at GM losses spiraling up to $90 Million daily if the strike continues into a fourth week,” Anderson wrote in an analysis published Tuesday.

Workers are also getting hit. AEG calculates that workers at GM and its suppliers have lost $412 million in wages through Sunday.

GM workers, who are getting a $250 weekly stipend from the union, shared their pain on social media.

I know it’s not a HUGE amount of money, but we are so desperate right now waiting to go back to work and this has at least provided us with a place to live if we end up losing our house this month.
The GM strike has drained all of our savings in the last month.
I feel so lucky!

In Warren, Michigan, GM employees are collecting food, diapers, and baby formula to help striking workers get by.

2020 Democrats are siding with workers

As they wait to return to work, workers have had some high-profile visitors meet them on the picket line.

Several Democratic presidential candidates have stopped by one of the 53 GM factories where autoworkers are on strike for the second week in a row. Sen. Kamala Harris joined the picket line Thursday in Nevada. A week earlier, Sen. Cory Booker stopped by a factory in White Marsh, Maryland.

It’s past time corporations realize the heart of their business isn’t profit, it’s people. Proud to stand with our @UAW Local 239 family this morning in White Marsh, MD in their fight for quality health care. pic.twitter.com/1lv6NfVQGs

Sen. Amy Klobuchar was the first to meet with GM employees. She brought workers doughnuts last month as they picketed outside a factory in Detroit, where they build Cadillacs and Chevys.

Sen. Elizabeth Warren later blasted the automaker when she joined a picket line at the same Detroit factory.

“GM is demonstrating that it has no loyalty to the workers of America or the people of America,” she said, according to the New York Times. “Their only loyalty is to their own bottom line. And if they can save a nickel by moving a job to Mexico or to Asia or to anywhere else on this planet, they will do it.”

In Kansas City that same day, former Vice President Joe Biden was speaking to GM workers who build the Chevy Malibu and the Cadillac XT4. “We didn’t bail out GM, [United Automobile Workers] bailed out GM,” Biden told the crowd. “You gave up more than anybody.”

These campaign stops are just the latest example of Democrats trying to outdo each other to win the blue-collar vote. Candidates vying for the White House know that union support (and endorsements) are crucial to their success, and they’ve been working hard to show their support for striking fast-food workers, supermarket employees and now, autoworkers.

President Donald Trump had campaigned in Lordstown in 2016, promising workers he would bring manufacturing jobs “roaring back to life.” That clearly hasn’t happened. The GM strike gives Democrats a unique opportunity to reach disillusioned Trump voters.

Watching candidates join picket lines shows just how powerful the labor movement has become in recent years, with a record number of workers going on strike. But GM workers are less concerned about politics than they are about paying their bills.

Randilyn Smith, a GM worker in Flint, Michigan, told ABC 12 News that she had to put her house up for sale because she is running out of money. “And I thought GM would be the way to provide for my family,” Smith said.

Mulan’s costumes are bright, dramatic, and (mostly) historically accurate
Joe Biden says he will pick a woman for vice president
From BTS fandom to video games: How 4 new friendships formed during lockdown
Sarah Sanders kicked out of Virginia restaurant by owner
A special education teacher explains why virtual learning is so hard on her students
A new court ruling officially opens the door for Trump to separate some migrant families again