GM workers will go on strike, the latest stoppage in a global trend of large-scale labor action 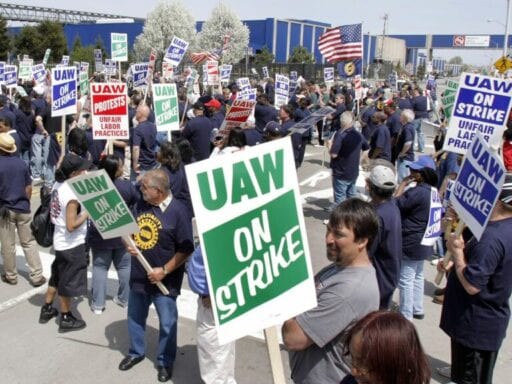 UAW workers will launch their first nationwide strike in 12 years, and the largest strike by any union since 2007.

At least 46,000 hourly General Motors employees will take to the picket line at midnight Monday, according to representatives from their union, United Auto Workers (UAW), as a result of stagnating contract negotiations with the Detroit-based automaker. This will be UAW’s first nationwide strike in 12 years.

Representatives for GM and UAW have been meeting for contract negotiations since July in order to hammer out details on wages, healthcare, benefits, profit sharing, and job security for both permanent and temporary workers. The union was also pushing for GM to reconsider the proposed closures of four facilities. Throughout, leaders on both sides expressed hope that they would reach an agreement, according to the Detroit News.

But GM workers’ contracts expired at midnight on Saturday with no agreement yet reached. At a press conference in Detroit on Sunday morning, Terry Dittes, a UAW vice president who leads the union’s GM efforts, said a strike was “our last resort.”

GM disagrees. Late on Sunday morning, the company released a statement of its own, saying it had offered the union more than $7 billion in investments across four states, including the creation of 5,400 jobs, and increased base wages and benefits. The Detroit News reported that the company also offered to halt the planned closure of one assembly plant and to build a new one in Ohio.

“We presented a strong offer that improves wages, benefits and grows U.S. jobs in substantive ways and it is disappointing that the UAW leadership has chosen to strike at midnight tonight,” the GM statement read in part. “We have negotiated in good faith and with a sense of urgency. Our goal remains to build a strong future for our employees and our business.”

This is the UAW’s first nationwide strike since 2007, when a work shutdown at 80 facilities lasted for 17 hours. Although the work stoppage begins at midnight, some UAW members are already on strike: Aramark janitorial workers, who are represented by UAW, are already striking at GM facilities in Michigan and Ohio. Tonight, all rank-and-file UAW members will join them.

The walkout will occur just weeks after federal investigators raided the homes of UAW President Gary Jones and former UAW President Dennis Williams as part of a years-long federal investigation into alleged corruption. Jones and Williams are accused of embezzling member dues; nine other people have been convicted in the investigation so far on charges that include embezzlement, mail and wire fraud, and money laundering.

Organized labor has seen a substantial reduction in its ranks over the last several decades, but recent years have marked a slight shift both as a new generation of workers explores unionization efforts and as established unions, like UAW, take collective action in high-profile ways.

According to the International Labour Organization, the number of workers who participated in work stoppages has doubled in the last two years. Last year saw teachers strikes in Arizona, Oklahoma and West Virginia and picket lines form outside Mariott locations in four states: All told, about 106 million workers went on strike last year alone.

Tonight’s UAW strike is the latest in a recent series of worker walkouts across the globe. It comes just days after British Airway cancelled all flights for two days as its pilots went on strike.

But as Vox’s Alexia Fernández Campbell has reported, the recent uptick in strikes are a small part of a significant increase in American labor action as a whole. American workers are participating in organized action in record numbers, Fernández Campbell writes, as a result of mounting anger about income inequality:

A record number of US workers went on strike or stopped working in 2018 because of labor disputes with employers, according to new data released in February by the US Bureau of Labor Statistics. A total of 485,000 employees were involved in major work stoppages last year — the highest number since 1986, when flight attendants, garbage collectors, and steelworkers walked off the job.

The increasing number of workers involved in labor strikes suggests that average Americans are not experiencing the “economic miracle” that President Donald Trump has described. They see the economy expanding and profits growing, but this doesn’t extend to their paychecks.

UAW has cited this concern in announcing its strike, arguing that the $8.1 billion in profits GM took in last year have not been shared with workers outside of the ranks of top executives. GM argues that it needs to save those profits for a rainy day, to ensure workers aren’t laid off in the event of a sudden economic downturn.

Obviously, its workers do not agree with that argument. It remains to be seen how long the coming strike will last — experts believe the company could endure a month of stoppages before its showrooms and supply chain are affected. But with worker frustration high, it seems unlikely that UAW will bend before its demands are met, meaning the strike could continue for some time.

Trump’s approval rating is rising slightly amid the coronavirus pandemic
5 people on what it’s like to be unemployed right now
Mr. Robot’s final season is a brilliant argument for the show’s ongoing relevance
Facebook will continue letting politicians lie in ads
Trump slashed refugee levels this year. For 2019, he’s slashing them even further.
Trump attacks a Republican governor for following his coronavirus testing advice