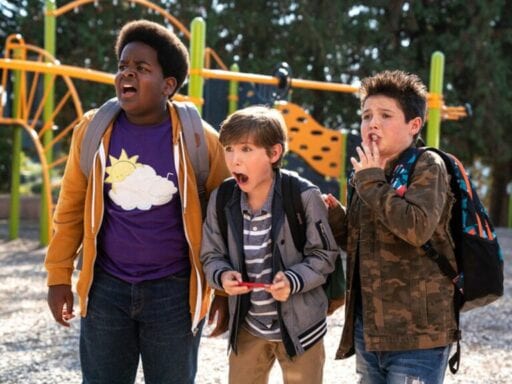 Three sixth graders end up on a journey of mishaps, raunch, and friendship.

So there I was, crunching on some popcorn, watching Good Boys, chuckling and sometimes wincing at the adventures of three 12-year-old boys, who were getting into scrapes as only 12-year-olds do. Wow, I thought. This movie is both raunchy and funny, without sacrificing the humor. What a rarity!

Then, all at once, I felt quite a jolt.

I’d been comparing the film in my head to Booksmart, which came out in May and bears many similarities to Good Boys. Both films fall into that time-honored category of movies about groups of friends on the cusp of big life changes who, over the course of one zany day, characters learn lessons about themselves, friendship, and growing up while also navigating a befuddling hormonal minefield.

In Booksmart, they’re graduating from high school. In Good Boys, they’re starting sixth grade. And in both, they’re young kids who are worldly and wise beyond their years, yet endearingly innocent at the same time, as they try desperately to make it to a party they’re certain will define their futures.

Watching Booksmart, about two girls headed to college, I identified with the nerdy girls stumbling toward adulthood. But the three protagonists of Good Boys are only 12 years old. And crunching on my popcorn there in the theater, I suddenly realized I was identifying … with their parents.

Of course — as Good Boys’ marketing cheekily teased — 12-year-olds won’t actually be able to see the film, on account of its R rating (for, basically, raunch and language). It’s a movie geared more toward their parents, or at least for those of us who haven’t quite forgotten what it was like to be 12, to think we understood everything about the world and yet constantly stumbled into situations we only really understand in hindsight. The main characters of Good Boys are still developing their frontal lobes, and it shows.

But they are good boys. The title isn’t ironic. They’ve been raised to do the right thing, and that’s what they want to do, even if they often can’t figure out how. Good Boys follows them through a day that tests both that sense of resolve and their friendship, and it’s a sage enough movie to not veer away from the confusing, exhilarating, ever-changing danger zone of being a tween.

Directed by Gene Stupnitsky, and co-written by Stupnitsky and Lee Eisenberg (the team behind Year One, Bad Teacher, and a number of episodes of The Office), Good Boys is a tale firmly in the Superbad mold. (It’s produced by Superbad’s writers, Seth Rogen and Evan Goldberg, and one of its executive producers is Superbad star Jonah Hill.)

Three sixth graders — Max (Room’s Jacob Tremblay), Lucas (Keith L. Williams), and Thor (Brady Noon) — have been best friends since kindergarten, calling themselves the “Beanbag Boys.” They do everything together.

One of Good Boys’ smartest insights into that period of life is that everyone is developing into their teenaged selves, but at very different speeds. Max’s hormones are pinging around like a pinball machine — his dad (Will Forte) walks in on him ogling a very funny character on his computer, I won’t give it away — and he’s especially enamored of Brixlee (Millie Davis), a shy girl in his class who might like him back. Thor tries to act tough and experienced, but he’s really only interested in auditioning for the school musical. And Lucas, who’s bigger than the other two boys, is both a card-carrying feminist and devastated by his parents’ impending divorce.

Meanwhile, the other kids in their class are doing their own thing, whether it’s being bullies or being cool. (One of the film’s funniest gags is that one of the bullies is named Atticus L., implying that “Atticus” was such a popular baby name when these kids were born in 2007, the year Harper Lee was awarded the Presidential Medal of Freedom, that there’s more than one in their class.) The coolest of them all, Soren (Izaac Wang) — the class record-holder for number of sips of beer, at a whopping three — is going to have a party at his house, and he solemnly summons Max to his lunchroom table to invite him. Then Max talks Soren into inviting Lucas and Thor, too.

But the trio is thrown into panic when Soren adds that it’s a “kissing party,” and that Brixlee will be there. How on earth do you … kiss?

Good Boys is a movie about irony, and a wistful look back

That question sends them on a riotous journey involving Max’s dad’s drone, which Max is strictly forbidden to touch; the next-door neighbor girl and her best friend, who have four or five years on the boys and are annoyed by their presence; a cache of Molly (a.k.a. MDMA) housed in a kids’ vitamin bottle with a very effective child-proof lid; and a variety of doo-dads that Thor finds in his parents’ closet, including a voluptuous life-sized doll that Thor is certain is used for CPR training.

Their still-developing worldviews lead to some gags designed to make you, well, gag, like when Max tries to practice kissing on the “CPR doll,” only to wonder why its mouth is so sticky. But they also reveal Good Boys’ status as a comedy for adults — not so much because of its content, but because its jokes assume the audience knows what’s going on.

Which, I think, makes the theme even more poignant. As the adventurous day begins to wane, the older girls tell the boys that they only really became friends in the eighth grade, and that you’re only friends with people in kindergarten because you live near to one another and your parents are friends. The trio insists that’s not true; they do live near one another, and their parents are friends, but they also really like one another too.

Yet few of the teenagers and adults and parents, sitting out in the audience, munching our popcorn, are still close with our own kindergarten chums. We know that what the girls are saying is true. And Good Boys wisely reminds us that sometimes drifting away is just fine. It can be sad, yes. But it’s part of life. We know that now; the boys are just learning.

Why we love drugs
“David Koch walked the walk”: a libertarian on the Koch brother’s legacy
Trump hails FAKE story of General Pershing executing 49 Muslims with bullets dipped in pig's blood
Madonna’s VMAs “tribute” to Aretha Franklin was all about Madonna
How to date a prisoner
What full FDA approval for Covid-19 vaccines really means