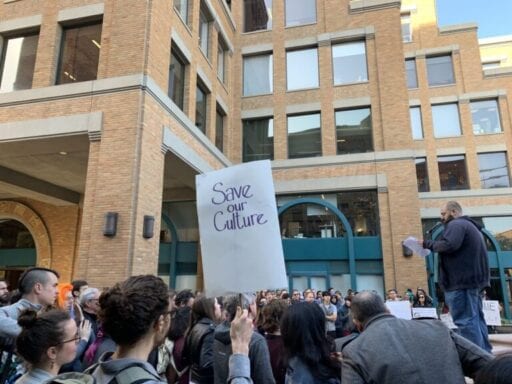 Hundreds of Google employees and protesters rallied in support of colleagues they say were put on leave for political reasons.

A group of roughly 200 Google employees and other protesters rallied outside of the search giant’s offices in San Francisco on Friday, demanding the company reinstate two colleagues who they say were unjustly punished for workplace organizing at the company — calling it an attack on accountability and transparency in tech.

Google has said the employees were placed on administrative leave for violating company policies about accessing sensitive internal documents and monitoring employees’ calendar events. But employees are objecting to those claims, saying the documents in question were not sensitive and that monitoring public calendar events is not breaking any corporate rules.

They accuse management of targeting the two employees put on leave, Rebecca Rivers and Laurence Berland, because of their involvement in worker activism at the company. Rivers helped put together a petition against Google’s work for US immigration enforcement agency Customs and Border Patrol (CBP), and Berland was involved with employee protests about hate speech policies on YouTube. Protesters are demanding that Rivers and Berland be reinstated at work immediately. Organizers called their suspension an “attempt to silence workers,” in an email about the rally.

Particularly in light of revelations earlier this week that the company has been in talks with a consulting firm known for union-busting, today’s protest was a strong sign of continued worker activism on a broad range of issues from sexual harassment to controversial government contracts, despite a perceived crackdown by management. While Google’s full-time employees are not currently forming a union, they’ve coordinated a wave of worker organizing on individual workplace issues. And some of Google’s contract workforce, such as a small group of technical employees in Pittsburgh and security guards in California, have unionized. Google employees in Zurich also recently held a talk about unionization, despite management’s attempts to cancel the meeting.

“I’m proud of what I did, and I believe everyone has a right to know what their work is being used for,” said Rivers about her criticism of Google’s potential bidding on a contract with CBP, a government agency that has come under fire by human rights organizations for its enforcement of Trump’s controversial family separation policies. “Instead of listening to me or thousands of my coworkers, Google has punished me by putting me on administrative leave.”

In response to concerns raised by protesters, a Google spokesperson sent Recode the following statement:

”We have clear guidelines about appropriate conduct at work, and we’ve had a number of concerns raised. We always investigate such issues thoroughly.”

Google has been limiting its famously open culture in the face of persistent scrutiny from employees about management’s decisions. The company has placed new rules on acceptable speech on internal forums, eliminated opportunities to question management on ethical concerns in weekly all-hands, and instituted a “need-to-know” policy for viewing many company documents that were previously more widely accessible to employees. The protest today showed that in spite of what are seen as efforts to silence employee feedback on management’s decisions, Google has further aggravated a growing base of internal activists by suspending the two workers.

“This is not really about me,” said Berland, who recounted being questioned for two-and-a-half hours by Google’s investigations team, during which time he said he wasn’t allowed to bring a colleague for support, take notes, or use the restroom. Berland said he was asked to name colleagues who had supported him and were involved in organizing efforts. “It’s not about Rebecca. It’s about us, all of us, and the open culture we built and treasure together. If they can do this to me, they can do this to anyone,” said Berland. “What is Google without our culture?”

At the rally, protesters carried signs such as “Shame on Google” and “Save Our Culture” as employees spoke on behalf of Berland and Rivers. One employee read aloud anonymous letters written by Google’s so-called “shadow workforce” of temps, vendors, and contractors (TVCs) detailing their unequal treatment, such as not receiving paid time off and other benefits their full-time colleagues enjoy. After the protest outside Google’s San Francisco office (separate from Google’s main campus in Mountain View), which lasted for over an hour, a group of about 40 Google employees took the protest indoors to the company cafeteria. According to a source present, some employees inside cheered as protesters handed out fliers.

Google has said it placed one of the individuals on leave for accessing multiple need-to-know documents — which it defines as ones containing sensitive information outside the scope of someone’s job — such as another team’s brainstorming ideas or strategic plans. A spokesperson for the company said it repeatedly warned one of the individuals being investigated. The spokesperson also said the other individual’s actions of monitoring the calendars of multiple employees — which they allegedly enabled notifications for — made their colleagues feel unsafe.

Rivers and Berland denied that they willfully accessed nor shared any “need-to-know” documents and said they were never warned about such action. Rivers said the documents she accessed directly before being put on leave were about community guidelines for taking down internal content on Google’s message boards. Several employees at the protest said that checking employees’ calendars is not unusual at a company like Google and not something they would view as making people feel unsafe.

“There’s a culture of transparency, so everyone looks at peoples’ calendars,” said one former Google employee who recently left the company and asked not to be named. “This is clear retaliation, textbook retaliation,” they said.

As part of their protest materials, employees created a satirical ticketing tool that allows employees to request permission to access any document or calendar directly to Kent Walker, Google’s chief legal officer. So far, about 100 employees have sent requests, according to a Google employee. Walker is viewed as the executive responsible for enacting a stricter policy on employees’ internal speech.

Many employees say the new rules around accessing documents are being selectively applied to punish employees who are organizing. Google has denied these allegations.

A culture of recent crackdowns

In recent months, Google has been ramping up its efforts to establish and enforce stricter guidelines around what employees can say at work. Last week, the company announced it would stop having its famous weekly “TGIF” all-hands meetings, replacing them with monthly talks that would focus on product launches. In his note to staff announcing the change, Google’s CEO Sundar Pichai cited leaks to the press as one of the reasons for making this change.

“When the news of TGIF’s cancellation spread, we saw that familiar refrain: ‘blame it on the leaks,’” said Zach Siegel, a software engineer for Google who spoke at the rally. “What a tired excuse. Blaming leaks and leakers is a fear tactic that is intended to make us point fingers at each other and distract us from focusing on the real decision-makers.”

In August, the company introduced community guidelines that discouraged employees from talking about politics and “disrupting the workday to have a raging debate over politics or the latest news story.” The guidelines were positioned as a way to prevent employee harassment and doxing. But employees have reported that the guidelines have been used to silence criticism of management, such as posts that questioned the hiring of a former Department of Homeland Security staffer, Miles Taylor, who helped defend Trump’s controversial family separation policy and Muslim ban.

So far, many of the company’s new rules and initiatives around employee activity have had the opposite effect: They instead increase attention on Google’s practices and fire up its workers.

Last month, employees discovered that the company had built an internal tracking tool that would automatically report employees who create large meetings. Some accused the company of using it to monitor gatherings of worker activist groups, according to a report in Bloomberg, causing a flurry of controversy within the company.

“Have you noticed that there’s always someone watching us?” asks one fictional cartoon Google employee in a fake HR training kit released by employee organizers ahead of the protest. The character goes on to get punished by a C-suite executive who raises security concerns after she investigates why her colleagues are being monitored.

A few days after it was revealed that Google placed two employee activists on leave, a concerned whistleblower went forward with their reason for sharing the company’s secret plans to acquire the health data of millions of Americans to the press. It’s a sign, like today’s protest, that after 20 years of establishing an open culture, Google will not be able to restrict its employees’ abilities to investigate and question its executives’ decisions without a fight from its own rank-and-file.

“Google is built on trust,” said Siegel. “Our trust and user trust. If the company wants to succeed it needs to regain that trust through transparency and accountability. Not intimidation and retaliation.”

“A semi-truce”: Trump makes an EU deal to avoid a trade war
Trump says he will fill Ginsburg’s seat “without delay”
The genius of Aretha Franklin, explained by “I Say a Little Prayer”
The math behind why we need social distancing, starting right now
Sean Hannity suggests bombing Iranian oil refineries to cause “major poverty for the people of Iran”
America is still failing on coronavirus testing