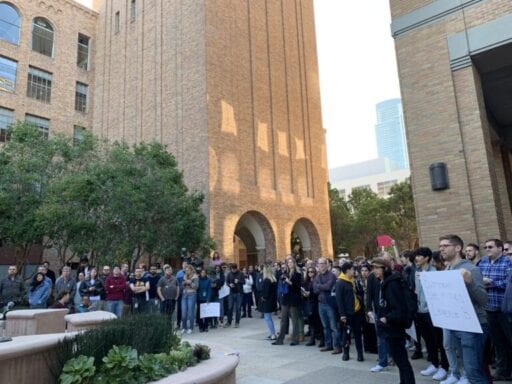 Share
Loading...
About 200 Google employees and other protesters rallied in front of Google’s San Francisco offices on Friday, demanding that the company reinstate two employee activists who were put on administrative leave. One of those employees, Rebecca Rivers, said she was fired today. | Shirin Ghaffary

Rebecca Rivers, a former engineer, said on Monday that the company terminated her employment.

A former Google employee who helped organize a petition against Google working with US immigration agencies has been fired from the company in what some are viewing as an attack on worker activism within the search giant’s rank and file.

Rebecca Rivers, a former Google software engineer, announced on her personal Twitter account that her employment had been terminated. According to Bloomberg, Google announced today that it fired four employees for what it called “clear and repeated violations” of its data-security policies, in a note sent to its staff and confirmed by a spokesperson for the company.

The move comes after Google placed Rivers and another employee also involved in organizing, Laurence Berland, on administrative leave earlier this month. The company alleged the employees violated company policies about accessing sensitive internal documents and monitoring employees’ calendar events. But Rivers and Berland have objected to those claims, saying the documents in question were not sensitive and that monitoring public calendar events does not break any corporate rules.

Around 200 Google employees and protestors rallied outside the search giant’s San Francisco office on Friday, demanding the company reinstate Rivers and Berland. The company’s firings today are viewed as a serious escalation of an increasing crackdown on Google’s historically permissive culture around sharing information — and what some employees are saying is an effort to silence workers’ concerns about controversial decisions.

In a note sent to staff by Google’s Security and Investigations Team, the company stated that a “thorough investigation” found the individuals fired “were involved in systematic searches for other employees’ materials and work,” and that they were found to be “repeating this conduct even after they were met with and reminded about our data security policies.” The note also alleged that some employees reported feeling unsafe because their calendar events were being monitored. Some screenshots of those calendar entries “made their way” outside the company, according to the note. Several Google employees on Friday told Recode that colleagues regularly look up each others’ calendar events, and that in their view, this shouldn’t be grounds for such punishment.

Rivers and Berland did not respond to a request for comment. A spokesperson for Google, Jenn Kaiser, said the company is not confirming the names of the employees fired today and declined to comment about workers’ allegations of retaliation.

At the rally on Friday, Rivers spoke about the actions she believes led to management taking action against her.

“I’m proud of what I did, and I believe everyone has a right to know what their work is being used for,” said Rivers about her criticism of Google’s work with Customs and Border Protection (CBP), a government agency that has come under fire from human rights organizations for its enforcement of Trump’s controversial family separation policies. In August, it was revealed that Google was offering a free pilot of one of its cloud products to CBP. “Instead of listening to me or thousands of my coworkers, Google has punished me by putting me on administrative leave.”

Rivers said she was questioned by Google’s investigations team about her involvement organizing a petition against the company’s work with CBP, as well as her personal social media usage.

Rivers isn’t the first employee to claim that the company has retaliated against her for political reasons. Two of the leaders of the 2018 Google walkout against sexual harassment, Meredith Whittaker and Claire Stapleton, have publicly said the company pushed them out because of their organizing. And several other prominent former internal activists, such as Liz Fong-Jones and Irene Knapp, have made similar claims. A handful of employees on the other side of the political spectrum, who are removed from Google’s core group of largely left-leaning activists, have claimed they were terminated for sharing conservative political beliefs at work. One of those employees, Kevin Cernekee, posted comments on internal Google forums seemingly defending white nationalist figure Richard Spencer and the hate group Golden State Skinheads.

In September, Google agreed to publicly remind its employees about their legal rights to talk about and engage in workplace organizing, as part of a settlement with the US National Labor Relations Board over claims that the company was suppressing workers’ protected speech.

In the past two years, Google has drawn criticism from its employees about ethical concerns around topics ranging from sexual harassment to government contracts. In particular, the company’s hiring of a former US Department of Homeland Security official, Miles Taylor, who helped defend President Trump’s controversial family separation policy and Muslim ban, recently raised ire within the company’s rank and file. Some employees alleged that the company was deleting internal questions that were critical of Taylor’s hiring.

At the same time that internal activism has been growing, the company has been limiting its famously open culture. In the past year, it has placed new rules on acceptable speech on internal forums, eliminated opportunities to question management on ethical concerns in weekly all-hands meetings, and instituted a “need-to-know” policy for viewing many company documents that were previously more widely accessible to employees.

In its note to employees today, Google made a case that its actions to restrict employees’ access to sensitive information is not a limitation of its open culture.

“We have always taken information security very seriously, and will not tolerate efforts to intimidate Googlers or undermine their work, nor actions that lead to the leak of sensitive business or customer information,” read the note. “This is not how Google’s open culture works or was ever intended to work.”