Google’s former CEO just committed another $1 billion to charity. But he’s spending it on buzzwords. 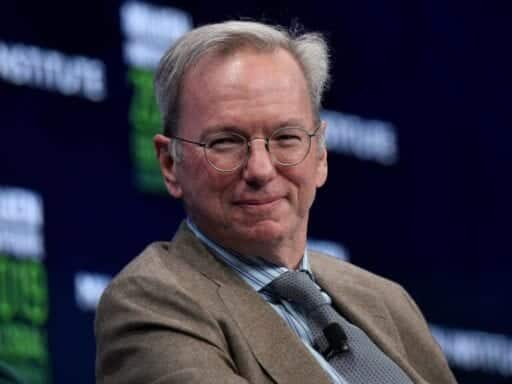 Schmidt could save an estimated 240,000 lives instead.

Eric Schmidt on Wednesday made a bold promise: To double the amount of money he and his wife, Wendy Schmidt, spend on charity. What he’s not doing is detailing with any specificity what exactly it is that he’s spending his money on.

Schmidt, the former CEO of Google with a net worth of $14 billion, said he would be committing another $1 billion to charity, part of a new flagship effort to back “talent” around the world. What does that mean?

Eric and Wendy Schmidt have over the last few years assembled a byzantine network of political and philanthropic efforts as they try and give more of their money away (not explicitly more than half as they’re one of the many tech leaders not to sign the Giving Pledge, the commitment to give a majority of their money away). In recent years, especially since stepping down as the executive chairman of Alphabet in 2017, Schmidt has created new organization after new organization, most notably a vehicle called Schmidt Futures, a science-focused philanthropic arm.

Tech philanthropists, often to a fault, like to start their own charitable efforts rather than funding preexisting things with proven track records, like the Gates Foundation. It seems that Schmidt’s existing half-dozen vehicles are not enough for him, which is why he’s launching yet another effort called Rise, which is a partnership between Schmidt Futures and the trust behind the Rhodes Scholarship.

“All around the world there are brilliant and visionary people who could do so much more to help their communities and the world if they had the support and opportunity,” he says in his press release. “Rise will find and connect these exceptional young people — and give them individualized support they need — so they can work together to serve others.”

What exactly does that mean? Well, to start, Schmidt didn’t say exactly how much of the $1 billion in new money he’d be spending on the cause.

Schmidt is effectively spending hundreds of millions of dollars to create a mentoring network for high schoolers. He’ll choose 100 people from around the world each year to become fellows and part of his “talent network” — which might be similar to a Rhodes Scholarship network, but you know, without a paid-for degree from Oxford. The Schmidts do say that they could offer some scholarships, a summer program before candidates’ final year of high school, along with “online community and learning” and “global connections for impact.”

If that seems vague and full of buzzwords to you, you’re not alone. (Schmidt’s team didn’t return a request for comment.)

This all sounds well and good, on the surface. And frankly, Eric and Wendy Schmidt can do whatever they want with their money. But at a time when billionaire philanthropy is under more scrutiny than ever, along with concerns about the business practices of Google and Schmidt’s own leadership record there, announcements like these can no longer be greeted with automatic applause.

That’s especially so given that there are so many better ways to give money away in 2019 that advocates say would have a tangible, immediate impact on the world. Just as billionaires should not be giving away hundreds of millions of dollars to Ivy League universities, the standard employed by my colleague Dylan Matthews is whether a mega-gift is better for the world than donating to the Against Malaria Foundation, which offers bed nets to needy people in Africa.

Every $4,104 donated to that organization, according to one measure, saves a human life. That’s over 240,000 lives that Eric Schmidt could save instead of spending it on this new philanthropic effort.