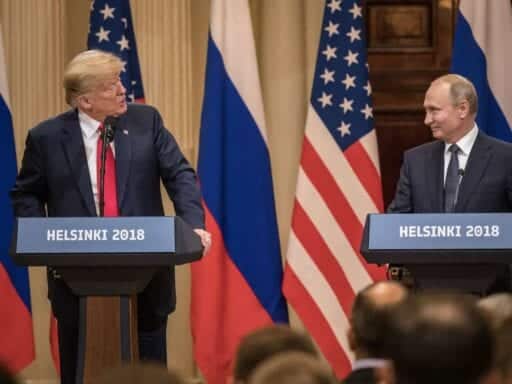 Republicans called Trump’s remarks in Helsinki “disgraceful” and “shameful.” But they pretty much stopped there.

President Donald Trump’s deference to Russian President Vladimir Putin at an extraordinary press conference in Helsinki, Finland, on Monday was stunning and disconcerting, particularly given his bullying of America’s European and NATO allies last week.

Trump’s remarks, which included taking Putin at his word when he denied Russian meddling in the 2016 US election, forced even Republican lawmakers to rebuke the president. Senators and representatives also defended the US intelligence community — though some were careful to separate Russian attempts at meddling from the wider special counsel investigation into whether members of the Trump campaign coordinated with the Kremlin.

Sen. John McCain (R-AZ) called Trump’s appearance “one of the most disgraceful performances by an American president in memory.”

Today’s press conference in #Helsinki was one of the most disgraceful performances by an American president in memory.

“The damage inflicted by President Trump’s naiveté, egotism, false equivalence, and sympathy for autocrats is difficult to calculate. But it is clear that the summit in Helsinki was a tragic mistake,” McCain said in his statement.

He continued: “President Trump proved not only unable, but unwilling to stand up to Putin. He and Putin seemed to be speaking from the same script as the president made a conscious choice to defend a tyrant against the fair questions of a free press, and to grant Putin an uncontested platform to spew propaganda and lies to the world.”

I never thought I would see the day when our American President would stand on the stage with the Russian President and place blame on the United States for Russian aggression. This is shameful.

Sen. Marco Rubio (R-FL) stopped short of calling Trump out by name, choosing instead to chastise the administration’s approach toward Russia.

Foreign policy must be based on reality,not hyperbole or wishful thinking. And the reality is #Russia is an adversary. Because #Putin doesn’t believe in win/win scenarios & thinks only way to make Russia stronger is to make U.S. weaker. Any approach not based on this will fail.

Sen. Lindsey Graham (R-SC) called Trump’s response to Putin a “sign of weakness” — and was one of the few lawmakers on Capitol Hill to recommend hearings on US cooperation with Russia in Syria.

It is imperative that Congress hold hearings on the extent and scope of any cooperation with Russia in Syria regarding Iran’s presence.

He also quipped that Trump shouldn’t accept the gift of a soccer ball from Putin because it might be bugged — before following up later to distinguish between Russian meddling and collusion.

Finally, if it were me, I’d check the soccer ball for listening devices and never allow it in the White House.

Meddling & collusion are NOT the same thing.

Russia did meddle in 2016 election & are trying it again. I’ve seen no evidence of collusion, plenty evidence of Russian meddling.

Bad day for the US. Can be fixed. Must be fixed.

Sen. Susan Collins (R-ME) said Trump’s statements reflect a position that is “untenable and at odds with the forceful response the moment demands.”

The Russians were relentless in their efforts to meddle in the 2016 elections, and their efforts are ongoing. (1/3) pic.twitter.com/AMOVi2PrSe

Sen. Cory Gardner (R-CO), who said he would continue to support sanctions against Russia, warned the administration against repeating the “mistake of past Administrations in normalizing relations with Russia at zero cost to Putin.” He also failed to call Trump out by name.

.@SenCoryGardner statement on #Helsinki meeting: “Nothing should change as of today – Putin’s Russia is not a friend to the United States.” pic.twitter.com/qfMTscBWcY

Republicans in the House also rejected Trump’s statements, but few offered any tangible solutions to address Trump’s capitulation toward Putin on the national stage.

“There is no question that Russia interfered in our election and continues attempts to undermine democracy here and around the world,” House Speaker Paul Ryan (R-WI) said in a statement.

The statement continued: “That is not just the finding of the American intelligence community but also the House Committee on Intelligence. The president must appreciate that Russia is not our ally. There is no moral equivalent between the United States and Russia, which remains hostile to our most basic values and ideals. The United States must be focused on holding Russia accountable and putting an end to its vile attacks on democracy.”

Rep. Trey Gowdy (R-SC), the chair of the House Oversight Committee, seemed to suggest that that officials just haven’t tried hard enough to persuade the president that Russia meddled in the election.

“Russia attempted to undermine the fundamentals of our democracy, impugn the reliability of the 2016 election, and sow the seeds of discord among Americans,” Gowdy said in a statement.

He added that he was “confident former CIA Director and current Secretary of State Mike Pompeo, DNI Dan Coats, Ambassador Nikki Haley, FBI Director Chris Wray, Attorney General Jeff Sessions and others will be able to communicate to the President it is possible to conclude Russia interfered with our election in 2016 without delegitimizing his electoral success.” (This, even though Trump seemed to favor Putin’s explanation over the assessment of DNI Coats at the press conference on Monday.)

Rep. Peter King (R-NY) said he was “disappointed” In Trump’s remarks, and said the suggestion that Russia helped Mueller on the meddling issue was akin to “bringing ISIS into a joint terrorism task force.”

Just talked to @RepPeteKing. He “strongly disagree(s)” with Trump statement that Russia did not interfere. Is “disappointed, not flabbergasted” by @POTUS remarks. Says having Russia cooperate with Mueller “would be like bringing ISIS into a joint terrorism task force.”

The American people deserve the truth, & to disregard the legitimacy of our intelligence officials is a disservice to the men & women who serve this country. It’s time to wake up & face reality. #Putin is not our friend; he’s an enemy to our freedom.

As a member of the House Armed Services Committee, I am deeply troubled by President Trump’s defense of Putin against the intelligence agencies of the U.S. & his suggestion of moral equivalence between the U.S. and Russia. Russia poses a grave threat to our national security.

Russia has a track record of meddling in elections – not only ours in 2016, but around the world. I support the Mueller investigation in getting to the apolitical truth.

A person can be in favor of improving relations with Russia, in favor of meeting with Putin, and still think something is not right here.

But beyond the tough talk, very few Republican lawmakers, who control both chambers of Congress, offered any action to pressure the president.

As Trump tramples over US foreign policy and cozies up to Russia, the House continued grilling Lisa Page — who was the recipient of those infamous texts from FBI agent Peter Strozk — in an effort to reveal bias in the investigation into possible connections between the Trump campaign and Russia.