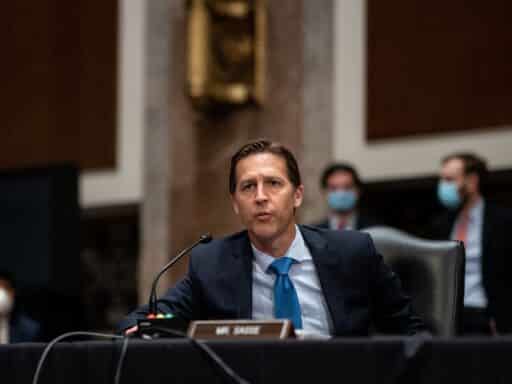 Sasse wrote that the Capitol riot was not the result of “a few bad apples” but “a rotten seed” at the root of the Republican Party.

Sen. Ben Sasse (R-NE) issued a scathing critique of President Donald Trump, right-wing media, and the influence of the QAnon conspiracy theory among mainstream conservatives in an essay published Saturday in the Atlantic, arguing that the January 6 storming of the US Capitol should be a warning sign that something has gone deeply awry in Republican politics.

“The violence that Americans witnessed—and that might recur in the coming days—is not a protest gone awry or the work of ‘a few bad apples,’” Sasse wrote. “It is the blossoming of a rotten seed that took root in the Republican Party some time ago and has been nourished by treachery, poor political judgment, and cowardice.”

Sasse’s blunt criticism of his own party, which extended to GOP leadership in the House as well as incoming pro-Trump freshmen, is reflective of the emerging factioning of the GOP as Trump prepares to leave office. As the new Congress settles in, members of the Republican Party are splitting — and sparring — over whether to embrace Trump’s legacy or repudiate it.

Some Republicans, such as Sasse and Sen. Lisa Murkowski (R-AL), have made clear they believe breaking with Trump is essential for the party’s survival. But others, like South Carolina Sen. Lindsey Graham — who on Sunday addressed Trump directly during an appearance on Fox News, saying, “Your policies will stand the test of time. You’re the most important figure in the Republican Party” — feel the opposite. It’s difficult to predict which faction will emerge as the dominant one, but given recent polling data showing strong levels of Republican support for Trump, calls for a different path may not resonate as strongly as Sasse may hope.

Sasse’s op-ed attempts to articulate why more Republicans should join him, however. He argues that the GOP is at a fork in the road, and must make a choice on whether to continue to allow Trump’s political and intellectual outlooks to shape the party:

When Trump leaves office, my party faces a choice: We can dedicate ourselves to defending the Constitution and perpetuating our best American institutions and traditions, or we can be a party of conspiracy theories, cable-news fantasies, and the ruin that comes with them. We can be the party of Eisenhower, or the party of the conspiracist Alex Jones. We can applaud [Capitol Police] officer [Eugene] Goodman or side with the mob he outwitted. We cannot do both.

Over the course of the piece, Sasse directly condemns a wide range of people and organizations across American conservative life. He calls QAnon-supporting Rep. Marjorie Taylor Greene a danger to the stability of the GOP, characterizing her as being “cuckoo for Cocoa Puffs.” He says that House Minority Leader Kevin McCarthy failed “failed the leadership test and sat on the sidelines” when he declined to disavow Taylor Greene’s campaign, seeming to prefer her elevation than risking losing her district to a Democrat.

He reserved particularly harsh words for the right-wing media ecosystem in particular, and its role in adding weight to Trump’s false claims that he had actually beaten Biden in the 2020 election:

The conservative swaths of this media landscape were primed for Trump’s “Stop the steal” lie, which lit the fuse for the January 6 riot. For nine weeks, the president consistently lied that he had “won in a landslide.” Despite the fact that his lawyers and allies were laughed out of court more than 60 times, he spread one conspiracy theory after another across television, radio, and the web. For anyone who wanted to hear that Trump won, a machine of grifters was turning clicks into cash by telling their audiences what they wanted to hear. The liars got rich, their marks got angry, and things got out of control.

Overall, Sasse says he believes the problem with his party is that it has failed to find stirring, reality-based narratives for Republicans to organize around, claiming declining participation in organized religion and the challenges caused by labor dislocations have left a void that has been filled by Trump and QAnon.

Sasse sees Trump’s departure from the White House as a key opportunity for the Republican Party to loosen Trump’s grip on the party, disavow conspiracy theories, and become a more serious political movement. While he declines to say if he’ll vote to convict Trump in a future Senate impeachment trial, he chided House Republicans who refused to do so on account of fearing for their safety.

Sasse’s concerns are not unique among Republican elites. Among many top donors, strategists and lawmakers, Trump’s self-serving orientation and is increasingly being seen as a liability for the party’s political and policy agendas going forward.

This is especially true when it comes to future electoral prospects. Republican officials and donors blame Trump for the GOP’s twin losses in the Senate runoffs in Georgia after Trump publicly fumed about the state’s Republican leadership for months — while continually casting doubt on legitimacy of the state’s electoral systems.

And a number of large corporations announced that they were suspending donations to Republicans who voted against the certification of President-elect Joe Biden’s election win, which, if sustained, could hurt their ability to compete with Democrats in the next election cycle.

And of late, Trump has taken a somewhat adversarial stance against certain segments of his party, threatening to back the primary opponents of lawmakers he does not like. Establishment Republicans are worried that a Trump-fueled split in the party could damage their prospects as they prepare for midterm elections.

All of this has led some Republican lawmakers — like Sasse — to decide Trump’s political style is too unpredictable, is overly transgressive of political norms, and a distraction from their policy agenda. This is reportedly part of why Senate Majority Leader Mitch McConnell is said to be contemplating voting to convict Trump in a Senate impeachment trial and why some Republicans are already working to defeat Trump-style candidates in the 2022 elections.

But the problem is that, at least so far, Trump still commands strong support among Republican voters. While the storming of the Capitol caused Trump’s overall approval ratings to drop by several points, he still holds high levels of support among Republicans across the country — and most of them don’t blame him for the violent mob that overran the US Capitol on January 6.

For instance, a recent Washington Post-ABC News poll has some sobering takeaways for Republican reformers who want to sanction Trump and his disinformation-style of politics. The poll found that 85 percent of Republicans are opposed to the idea that Congress should remove Trump from office and prevent him from holding elected office in the future; two-thirds believe he acted responsibly after the election; and most say he bears no responsibility for the storming of the Capitol.

The poll also found Republicans split on Trump’s value as a leader for the party after he leaves the White House. Sixty percent of Republicans say party leaders should follow Trump’s lead in the future, while 33 percent say they should move away from Trump.

There are also questions of how seriously Republican voters will take lawmakers who want to discard Trumpism after those same lawmakers largely voted in lockstep with the president’s agenda; kept silent despite extraordinary corruption, impropriety, and recklessness during his four years in office; reduced criticism of him in the run-up to elections; and reaped benefits from the right-wing media they’re now describing as having gone too far. In other words, for GOP reformers, the introspection might need to go further than Trump.

Alaska’s independent governor drops out of 3-way race and endorses a Democrat
Foreign policy was a loser in the Democratic debates
Calling health care workers “heroes” erases just how terrified and exposed they really are
Vox Sentences: The opioid trials
It is absolutely fine to rip your books in half
After weeks of lying, Saudi Arabia just admitted Jamal Khashoggi is dead