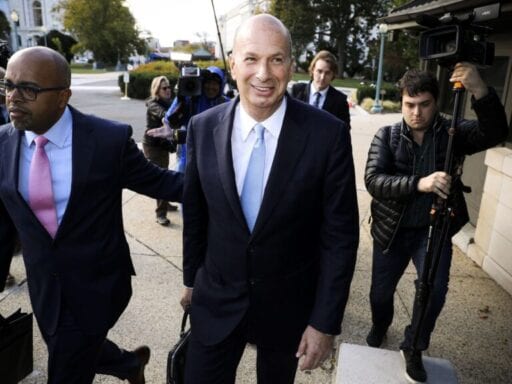 Share
Loading...
US Ambassador to the European Union Gordon Sondland (center) arrives at the US Capitol on October 17, 2019. | Chip Somodevilla/Getty Images

Here’s who Sondland is, and why he’s so important to the Trump-Ukraine scandal.

Again and again during the first four impeachment hearings, Republicans had a common complaint — the witnesses were people who had never, or hardly ever, spoken to President Donald Trump.

That’s not the case for US Ambassador to the EU Gordon Sondland, who’s set to testify publicly starting 9 am Wednesday. Sondland, other witnesses have made clear, was in direct contact with President Trump regarding the effort to get Ukraine to launch politicized investigations.

But it’s not yet clear if Sondland will “recall” much about his talks with Trump on Wednesday. His initial closed-door testimony from October was remarkably incomplete, and he’s already had to submit an addendum to it. Even the revised version is still quite difficult to square with documents and other witnesses’ accounts.

Sondland did make an important admission in that addendum — he acknowledged that he did, in fact, tell a top adviser to Ukraine’s president that hundreds of millions of dollars in military aid likely depended on whether Ukraine would publicly commit to the investigations. That is, he admitted to being the messenger for the most scandalous version of the quid pro quo.

Yet Sondland’s explanation for why he told the Ukrainians this on September 1 is rather bizarre — he says he simply “presumed” it was the case.

In contrast, other witnesses have said that, at the time, Sondland offered a different explanation — they’ve testified he told them he had talked to President Trump, and that this is what President Trump wanted.

And it gets uglier. Over the course of the week following Sondland’s September 1 instruction to the Ukrainians, two witnesses — diplomat Bill Taylor and NSC staffer Tim Morrison — say Sondland told them he had another conversation with Trump, and that Trump was adamant that Ukrainian President Volodymyr Zelensky publicly announce the investigations.

Meanwhile, another witness — Kyiv-based US embassy official David Holmes — testified that back on July 26, he’d overheard a call between Sondland and Trump. Sondland, Holmes said, assured Trump that Zelensky would commit to “investigations” — and after the call, Sondland explained that this meant investigating “Biden.”

If you watch one hearing this week, make it this one:

Find the official live stream here, you can also watch it on C-SPAN or on Vox’s Facebook and Twitter. The hearing starts at 9am Eastern, Wednesday and will run several hours.

Who is Gordon Sondland?

A developer and luxury hotel magnate from the Pacific Northwest, Sondland has been a Republican donor and an influential player in Oregon and Washington state politics for decades. Around the time Trump ran for president, Sondland wanted to upgrade himself from a regional power player to a national — and even international — one. There was a brief period in which Sondland foreswore Trump’s candidacy due to bad press, but once Trump won, Sondland made up for it by pouring $1 million into his inaugural committee.

His reward was being named Trump’s ambassador to the European Union in 2018, and once in the post, he quickly became notorious for his lack of discretion and aggressive behavior. And after Trump ousted the US Ambassador to Ukraine Marie Yovanovitch earlier this year, Sondland took on a major role in Ukraine policy. He dubbed himself, Special Representative for Ukraine Kurt Volker, and Energy Secretary Rick Perry as the “Three Amigos,” and set about trying to build bridges to the new Ukrainian government under President Volodymyr Zelensky.

In text messages, phone calls, and meetings with officials in several different countries, Sondland worked to try and reach some sort of deal between Ukraine and Trump — a deal that involved Ukraine committing to investigations Trump wanted. Witnesses have portrayed Sondland as centrally involved in this effort early on, going back to at least late June.

At first, Sondland attempted to get the Ukrainians to commit to those investigations so Trump would grant them a White House meeting. Later on, though — he now admits — he told a top Zelensky adviser that nearly $400 million in military aid would also likely depend on an announcement of those investigations.

His behavior led Bill Taylor, the top US diplomat in Ukraine, to raise concerns. “As I said on the phone, I think it’s crazy to withhold security assistance for help with a political campaign,” Taylor wrote to Sondland in a September 9 text. Before he responded, Sondland called Trump — and then, hours later, told Taylor there was “no quid pro quo.”

What Sondland didn’t recall even after he updated his testimony

But there’s much we still don’t know about Sondland’s role in the scandal. His initial testimony was filled with claims that he could not “recall” this or that — while other witnesses managed to remember a whole lot more. Even after his addendum, here are events confirmed in documents or attested to by other witnesses that Sondland still hasn’t managed to “recall”:

There are a few common themes to what Sondland has failed to recall.

First, he has insisted that he was unaware until very late that demands to investigate Burisma had any connection to the Biden family. “I never made the connection between Burisma and the Bidens until the very end,” he said in his deposition. But other witnesses say he spoke openly about investigating Biden in July, on two separate occasions.

Second, he has managed to recall some new facts about the military aid holdup, but is still vague about parts of it. He says in his addendum that he simply “presumed” Trump was tying military aid to investigations. He also says, he soon learned Zelensky himself would have to make a statement on investigations to get the aid — but that he does “not specifically recall how I learned this.”

Finally, there are all those conversations with Trump about this topic. Sondland could only manage to recall one chat with Trump in his initial testimony — one in which, he claims, Trump insisted there was no quid pro quo. He hasn’t yet managed to recall all the other conversations with Trump he told people he was having at the time. So watch closely at Wednesday’s hearing for whether he gives a fuller account of Trump’s personal role — or whether he continues to obscure it.

The viral video of Mike Pence being grilled by an ER doctor about Medicaid cuts, explained
How bookstores are weathering the pandemic
The case for capping all prison sentences at 20 years
The controversy around a black man killed by police in his own home, explained
Will young women of color shape the Democratic Party?
How to avert a post-election nightmare