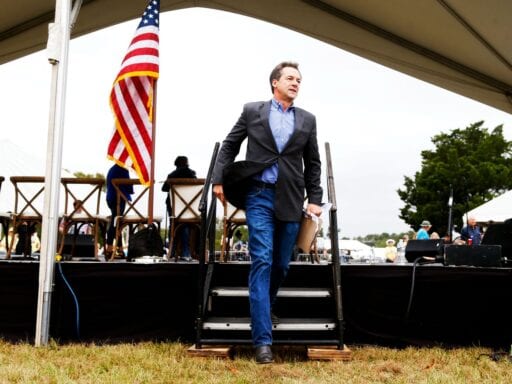 Bullock could help Democrats expand their Senate map this fall.

After spending many months insisting he would not run for the US Senate under any circumstances, Montana Gov. Steve Bullock is doing just that.

Bullock, a popular Democratic governor in conservative Montana and a long-shot candidate for president last year, announced Monday he will challenge incumbent Sen. Steve Daines (R-MT) in the fall. In doing so, he could give Democrats a huge boost in their gambit of taking back the US Senate. Bullock’s announcement comes just before the March 9 deadline to file his candidacy.

Daines will be a tough incumbent to beat; he has decent favorability ratings in the state among Republicans and independent voters, and he is tying himself closely to President Donald Trump, who won Montana by 20 points in 2016. But experts in the state said Montana — at least at the state level — is more independent than it is solidly Republican, and Bullock is also well-liked.

“I think a lot of people would classify Montana as a purple state,” said Sara Rinfret, a professor who conducts the University of Montana Big Sky Poll. “Nationally we tend toward more Republican-leaning, but if you look at statewide races we really lean both sides.”

In the latest poll Rinfret conducted from February 12 to 22, Bullock is trailing Daines by 9 points — picking up about 38 percent support compared to about 47 percent for Daines. But every other Democrat in the field is polling in single digits, underscoring what national Democrats mean when they say Bullock is the only one with a real shot at beating the Republican.

Who is Steve Bullock?

Bullock, a term-limited governor, is originally from Montana — a factor countless political experts in the state say is a very important part of running in the state. He was one of a large number of Democrats who ran for president, before dropping out in December.

But Bullock’s presidential run gave us a good idea how he might frame a Senate campaign; he will likely run on his track record of working with Montana’s Republican-controlled legislature to get things accomplished that the deadlocked US Congress could only dream of: passing an infrastructure plan, Medicaid expansion, and a campaign finance reform bill.

This pragmatic, bipartisan approach has earned Bullock plenty of goodwill in Montana. Numerous in-state polls last year showed Bullock has the highest approval rating of any statewide elected official, including Daines and Democratic Sen. Jon Tester. And although Daines has a solid approval rating, Trump’s net approval rating in Montana has fallen by 18 points since he took office, according to Morning Consult’s tracking. Tester hung onto his seat in 2018, a key victory in an otherwise bleak year for Senate Democrats.

“He governed successfully and governed well,” Montana State University political science professor Dave Parker told Vox in an interview when Bullock announced his run for president last summer. “Unlike any other Democratic candidate, he’s done so in a fairly red state.”

Bullock’s announcement is a massive boon to Democrats in their bid to take back the US Senate.

While he’s still got a lot of work to do — and Daines is a formidable competitor — the amount of familiarity and goodwill he’s built up in Montana means he’s in a much better position than any other candidate the party would have been able to recruit for the job.

“We will move the rating of the race from Likely Republican to Leans Republican if Bullock enters,” Kyle Kondik, editor of Sabato’s Crystal Ball, told Vox. “He is the only Democrat in the state who could really threaten Daines, and Montana is more competitive than its topline presidential partisanship indicates.”

This means that Montana is now on the list of states Democrats are trying to flip this fall as they try to retake the Senate majority. Currently, the upper chamber is held by Republicans by a 53-47 margin, and Democrats have long been eyeing states including Arizona, Maine, North Carolina, and Colorado as prime targets to flip.

Much like in the other states atop Democrats’ list, Montana is going to be a tough fight — but at least now they actually have a shot.

“It’s uphill for Bullock, but this does expand the map,” said Kondik.

Why Democrats are voting on bills that have no chance of passing
1 million Americans live in RVs. Here’s how we’re coping with the pandemic.
Amazon and Walmart want you to think they always have the best prices. A smaller competitor is showi...
VOA White House reporter reassigned after asking Pompeo about Capitol aftermath
We admire these do-gooders. We just don’t want to date them.
Kamala Harris, Jill Biden, and the national embrace of stepmothers