Governors are starting to close their borders. The implications are staggering. 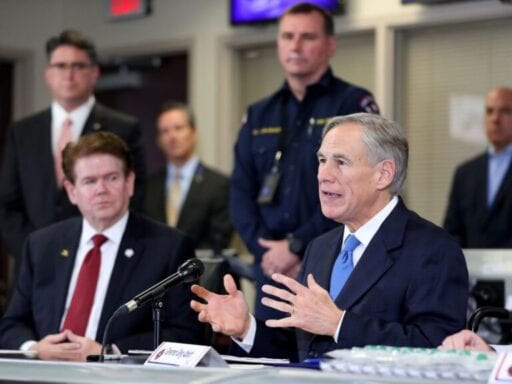 The coronavirus pandemic is testing the very notion that the United States are united.

Texas Gov. Greg Abbott (R) signed an executive order on Thursday that would require travelers from some coronavirus hotspots to self-quarantine: It provides that “every person” who flies into Texas from “New York, New Jersey, Connecticut, or the City of New Orleans, or in any other state or city as may be proclaimed hereafter, shall be subject to mandatory self-quarantine for a period of 14 days from the time of entry into Texas or the duration of the person’s presence in Texas, whichever is shorter.”

Other states have imposed similar orders. Florida Gov. Ron DeSantis (R) imposed an order on Tuesday that requires anyone flying from New York, New Jersey, or Connecticut to self-isolate for 14 days. Alaska and Hawaii also imposed self-quarantine orders on people traveling from other states.

These orders implicate one of the fundamental premises of the union among the 50 states: the right of American citizens to travel among them freely.

As the Supreme Court recognized more than 170 years ago, “we are one people with one common country. We are all citizens of the United States, and as members of the same community must have the right to pass and repass through every part of it without interruption, as freely as in our own states.” The right of all U.S. citizens to travel freely among the states, the Court later explained in United States v. Guest (1966), “was conceived from the beginning to be a necessary concomitant of the stronger union the Constitution created.”

If states can decide that some US citizens are not welcome within their borders, it may cease to be a union at all. This right to travel is implicit in the notion that citizens are Americans, and not simply Texans or New Yorkers.

But should that principle hold during a pandemic? Does the Constitution forbid states from taking drastic actions to slow the spread of a potentially deadly disease within their own borders?

Gov. Abbott’s order, at the very least, is probably carefully drafted enough to survive constitutional scrutiny. That order applies to “every person” who flies into Texas from the designated areas, regardless of whether that person is a resident of Texas or some other state. Read in that light, it does not discriminate against non-Texans.

But orders like Gov. Abbott’s do raise troubling constitutional questions. And they cut against the concept of a union of states that has prevailed in this country, especially since the New Deal.

The modern notion that every US citizen has the same rights, no matter where they travel within the nation, is rooted in a notion of nationwide solidarity that depends on a strong and competent federal government. And the Trump administration is not holding up its end of that bargain.

The three faces of the constitutional right to travel

As the Supreme Court explained in Saenz v. Roe (1999), the right of citizens to travel freely among the states has three separate components.

Abbott’s order largely implicates the second condition: “the right to be treated as a welcome visitor.” He does not actually attempt to bar residents of other states from entering Texas entirely.

That right, the Court explained in Saenz, flows from Article IV of the Constitution, which provides that “the Citizens of each State shall be entitled to all Privileges and Immunities of Citizens in the several States.” Yet Saenz also concluded that these “privileges and immunities” are not absolute. Rather Article IV bars “discrimination against citizens of other States where there is no substantial reason for the discrimination beyond the mere fact that they are citizens of other States.”

Thus, there are two potential reasons why Abbott’s order may be legitimate. The first is that it applies to Texans and non-Texans alike — a Houston resident who returns home from a trip to Newark will spend two weeks in isolation, just like a New York resident who travels to Dallas to visit a family member. The second is that Abbott has a “substantial reason” for imposing this order. He believes that it will reduce the number of people who enter Texas carrying a terrible disease.

To be clear, that does not mean that Abbott’s decision to single out four parts of the country is ideal policy. It may be the case, for example, that New York is simply testing more infected people to determine if they have coronavirus — and the virus may be quietly spreading just as rapidly in other parts of the country. Lawyers might also challenge Abbott’s order by arguing that states lack the power to interfere with interstate commerce by trying to prevent travel among the states.

But courts tend to defer to elected officials and the military during real or perceived national security crises. And they are likely to show similar deference to public health officials during the coronavirus emergency. Cases like Saenz suggest that states need to be careful when drafting interstate travel bans — if Abbott had exempted Texas residents, his order would be much more likely to be struck down — but so long as state officials receive competent legal advice, such bans are likely to be upheld.

The union is still failing

But even if such travel bans are legal, they are still indicative of a greater rot within our constitutional system. The premise of our Constitution is that the states gave up some of their sovereign authority to the federal government, in return for mutual benefits such as collective national defense and free trade among the states. The premise of the post-New Deal order is that the federal government must take on additional obligations, including providing a basic social safety net.

And the evolution of the right to travel played a significant role in establishing this new order. The right to travel is fundamentally tied to our conception of what it means to be a citizen of a nation. We’ve spent most of the last century fleshing out our understanding of what obligations our nation owes to its citizens.

Many modern-day rights to travel cases, including Saenz, involve state laws targeting poor people from other states. Saenz, for example, struck down a state law that provided less generous welfare benefits to California residents who recently moved to the state. The modern era of the constitutional right to travel was inaugurated by Edwards v. California (1941), an opinion that is imbued with the morality of the New Deal — and that also involved an effort to discourage poor Americans from entering California.

Prior to Edwards, the Supreme Court had typically allowed states to enact “precautionary measures against the moral pestilence of paupers, vagabonds, and possibly convicts.” Acting under this power, California enacted a law that made it a crime to bring into the state “any indigent person who is not a resident of the State, knowing him to be an indigent person.”

But Edwards, written by Justice Jimmy Byrnes, struck this law down. And, in doing so, it rejected the very idea that that the primary burden of caring for the poor should rest on state or local communities. “In an industrial society,” Byrnes wrote, “the task of providing assistance to the needy has ceased to be local in character”:

In a nation with a weak or miserly federal government, it may have made sense to allow states to lock out poor residents of other states so that they would have more resources to spend on their own poor. But state travel bans targeting the unfortunate no longer made sense in a society with a national safety net.

Byrnes was arguably the single most influential figure in President Franklin Roosevelt’s inner circle and he was a proud advocate for the New Deal. Indeed, Byrnes was so trusted by Roosevelt that Byrnes left the Supreme Court after only 15 months — to take on a White House job that wielded such immense power that he was often labeled the “assistant president.” (It should be noted that Byrnes was also a virulent racist who would go on to defend segregation as governor of South Carolina — sometimes moral righteousness and great evil live in the same man at the same time).

So it’s no surprise that Byrnes’s opinion in Edwards was a tribute to the New Deal social safety net. Indeed, Edwards paints the New Deal as the culmination of the union itself. For the first time, an American who fell upon unfortunate times could travel anywhere in the nation, knowing that the federal government would lift them up wherever they settled down. At long last, we were truly one people, and one nation.

All of this highlights why the stakes are so high for President Trump’s botched federal response to the coronavirus pandemic.

The premise of Edwards — indeed, the premise of the post-New Deal order — is that the federal government would provide a baseline of health, prosperity, and security to the nation as a whole. In return, the states would give up their role as the sole providers of “assistance to the needy,” and with it their power to close their borders to poor Americans.

The United States was one collective community, not 50 insular communities.

But Trump is slashing the safety net that holds this national community together. He spent much of the first three years of his presidency dismantling the federal government’s permanent infrastructure, that his predecessors set up to deal with a pandemic — including ordering the White House National Security Council’s (NSC) entire global health security arm shut down. He’s repeatedly proposed budgets making sharp cuts to the Centers for Disease Control and the National Institutes of Health.

Trump abdicates his role as the custodian of a nationwide safety net. Indeed, he recently told a group of governors who needed ventilators to deal with the rise of coronavirus cases to “try getting it yourselves.”

Thursday night, after New York Gov. Andrew Cuomo (D) requested tens of thousands of ventilators to protect the lives of infected New Yorkers, Trump dismissed this request in an interview with Fox News’ Sean Hannity. “I don’t believe you need 40,000 or 30,000 ventilators,” Trump claimed. “You go into major hospitals sometimes, and they’ll have two ventilators. And now, all of a sudden, they’re saying, ‘Can we order 30,000 ventilators?’”

Since the beginning I’ve promised you transparency and honesty on all aspects of our response.

To that end, I want to take a moment now to run you through our PPE requests with the federal government, and what we’ve received from them. pic.twitter.com/SsOw1l4UKF

Moreover, as Pritzker wrote on Twitter, Trump’s inaction forces governors to compete with each other — potentially even pushing them into a bidding war. “I have medical professionals and first responders begging for the things they need to keep them safe—but so does” Cuomo. So does Ohio Gov. Mike DeWine (R). So does Washington Gov. Jay Inslee (D).

Trump, meanwhile, was extraordinarily slow to use the Defense Production Act, a federal law that would allow the federal government to coordinate a national response among state and private industry. As Pritzker writes, it’s the federal government’s job to make sure that a nurse being properly equipped in Illinois doesn’t come at the cost of a doctor being ready for work in California.”

If the Trump administration is unwilling or unable to uphold its end of the post-New Deal bargain, the implications are staggering. Trump’s inaction does not simply threaten to exacerbate a pandemic. It threatens the very concept of what it means to be the United States of America.

Vox Sentences: From Russia With Love
Democrats capture Georgia US House seat held by Republicans since 1995
Trump’s cracking down on flavored vapes — but leaving flavored cigarettes on the market
The shift to online learning could worsen educational inequality
Vox Sentences: Did Barr lie to Congress?
Bank of America is giving its tellers a huge raise. It’s not out of generosity.