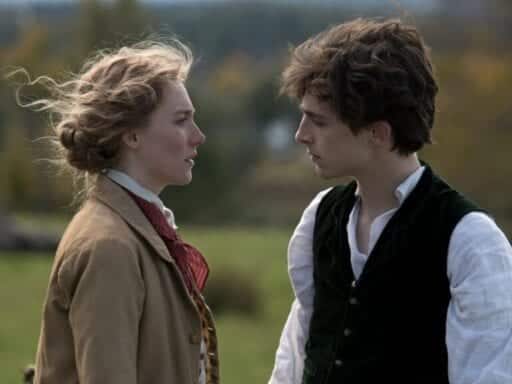 The new movie doesn’t “update” the novel. It does something much better.

Greta Gerwig made my favorite movie of 2017, Lady Bird. I was struck by how much it was simply about the relationship between attention and love. Late in the film, school headmistress Sister Sarah Joan praises the college entrance essay that Saoirse Ronan’s Christine a.k.a. Lady Bird has written, about her hometown of Sacramento, which Lady Bird cannot wait to leave.

“You write about Sacramento so affectionately, and with such care,” says Sister Sarah Joan. Lady Bird insists that she just pays attention, but Sister Sarah Joan gently pushes back. “Don’t you think they are the same thing?” she says. “Love and attention?”

There’s an echo of Sister Sarah Joan late in Gerwig’s new Little Women adaptation, which stars Ronan as Jo March, the intrepid writer and most independent of the four March sisters. Jo is walking with Meg (Emma Watson) and Amy (Florence Pugh) outside Plumfield, the sprawling house that wealthy Aunt March (Meryl Streep) willed to Jo.

The trio is discussing the book that Jo is writing. It’s not like Jo’s other stories, lurid tales of pirates and witches and murder, the kind of thing she thinks sells. It’s a novel about herself and her sisters, concerning what Jo calls the “domestic joys and struggles” the girls experienced growing up in Concord, Massachusetts during the Civil War. (Yes, Jo is writing Little Women.) But Jo is skeptical that anyone will want to read about the plays they put on or the squabbles they had or the Christmas they gave away their breakfast to a poor family when their mother (Laura Dern), whom everyone calls Marmee, asked them to. These things aren’t important enough for others to care about.

But Amy disagrees. “Writing things,” she says, “is what makes them important.”

As she was with Little Women author Louisa May Alcott, who wrote the 1868 novel based on her own youthful experiences, Jo seems to be Gerwig’s proxy in the film, and her sentiments throughout the movie come off as echoes of Gerwig’s own. But the way Amy’s statement rings in harmony with Sister Sarah Joan’s suggests they’re both voices of wisdom, reflecting something we ought to learn.

Little Women is clearly the work of a writer and director who has learned to pay loving attention to the small and beautiful things in life, and wants us to do so, too. It also teaches something lovely about paying attention to beloved, much-adapted texts like Alcott’s novel. And it is, at all times, a purely moving delight.

Little Women didn’t need “updating.” What it needed was a newly attentive eye.

If you, like me, grew up watching the 1994 Gillian Armstrong adaptation of Little Women — starring Winona Ryder, Susan Sarandon, Christian Bale, Eric Stoltz, Claire Danes, and Kirsten Dunst — the idea that anyone needed another adaptation may seem dubious. Little Women has been adapted for stage and screen many times, and film versions usually boast at least one marquee name in the cast. Katharine Hepburn played Jo in the 1933 version, and Elizabeth Taylor played Amy in the 1949 adaptation. But the beloved Armstrong version feels definitive for many people, as fresh now as it did then.

Gerwig’s Little Women stands out nonetheless. Rather than try to replace the other versions, the film finds its own new way into the March sisters’ lives while remaining respectful and faithful to Alcott’s source material. And that makes it an instantly vital addition to the Little Women canon.

Instead of telling the story chronologically, as most film adaptations (and Alcott’s novel) have, Gerwig splits it into two timelines. The movie opens late in Little Women’s familiar story, with Amy in Europe with Aunt March and Laurie (Timothée Chalamet); Beth (Eliza Scanlan) at home; Meg married to John Brooke (James Norton); and Jo in New York, where she’s met Professor Baehr (Louis Garrel). Jo is trying to sell her swashbuckling fiction to a magazine edited by the dour and mutton-chopped Mr. Dashwood (Tracy Letts), to help support the family back home in Concord.

Then the film moves back and forth between this later timeline, shot in cool-toned hues, and the rosier past, seven years earlier, when the girls were all teenagers living at home with Marmee while their father (Bob Odenkirk) was away with the Union army. They meet Laurie, who’s come to live next door to the Marches with his stern and very wealthy grandfather, and be tutored by John Brooke.

If you’ve seen previous adaptations or read the novel, you know what happens next; if you haven’t, I don’t want to spoil that for you.

Just know that what Gerwig does with this very familiar tale is remarkable, and a little hard to describe. There’s a feeling of restoration to her film — shades of meaning are lightly brushed onto characters and scene so that, once you see them, you get the sense they must have been there all along. Some of the quibbles people have had with the book, about the bratty flatness of Amy’s character, or about how the romantic relationships unfold, are reconsidered with a depth of humanity and understanding of the time in which the book was written, infusing them with new life.

It’s a genuinely extraordinary screenplay in that it feels like a work of criticism, in the very best way: Gerwig closely examines the original text and finds a new way to interpret it that adds only richness to the original. This Little Women doesn’t feel the need to “update” the story in order to make it “relevant,” nor does it really need to; the Marches (like the Alcotts) were ahead of their time, parents who believed in educating girls and giving them freedom to develop more like wildflowers than hothouse plants, and that comes through loud and clear in the film.

But it also shows evidence of contemplation. Gerwig’s Little Women is aware of the ways its characters do or do not fit the gendered norms of the 19th century, particularly with respect to how women are expected to comport themselves and earn their way in the world. The novel’s text is both sacred to this film and also layered with meaning, and Gerwig’s screenplay draws out and reimagines what has been taken for granted in the past.

And it doesn’t hurt that the film boasts what is likely the best cast version of the story; it’s difficult to imagine anyone better than Chalamet for indolent, lovable Laurie; a more believably ambitious and vivacious Jo than Ronan; or a better, finer Aunt March than Streep. But Pugh manages to blow them all away as Amy, who has to believably pull off Little Women’s biggest character arc, growing from impudent child to elegant and thoughtful woman. (What a year for Pugh, between this movie and Midsommar.)

But what comes through the most, for me, is the way the movie’s double-track timeline and fresh take emphasize what Amy says: That writing about things, or showing them in a movie, makes them important. Ordinary objects in our lives — a banister, a dress, a spinet piano, a little mailbox in the woods, rumpled bedsheets, burning paper — accumulate memories over the years.

The house you grew up in has all kinds of memories buried in it; the dishes you grew up eating dinner on, the funny old way a door creaks, the hours you spent reading in your favorite chair — those all meant one thing in the past, but take on new significance when you encounter them again. There is a reason we treasure heirlooms.

Often in Little Women, the girls’ memories become stacked on top of one another, with the rosy past and more cool-toned present colliding to provoke happiness, grief, love, and loss at the same time. Small sounds or repeated visual motifs emphasize that feeling. And it is the job of a writer like Jo March or Louisa May Alcott, or a filmmaker like Greta Gerwig, to notice those details and bring them to life — to remind us that all of life occurs in small moments, as we are dreaming of some grand future.

That’s why Gerwig’s Little Women is the kind of work that teaches patience and love and attentiveness to its audience, too. Amy’s exhortation to Jo suggests it’s up to her to find her own voice and drive her own story, and by the end of the film, it’s clear that’s exactly what Jo has done. It’s a surprising, perfect ending to a movie that’s a masterclass in how to love a work, and also love a world.