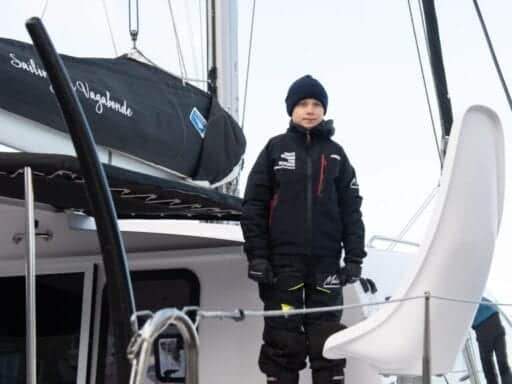 A pair of Australian YouTubers are giving the teen activist a ride on their solar-powered sailboat.

Teenage climate activist Greta Thunberg is now on her way back to Europe, departing North America as she arrived: on a sailboat.

Thunberg has had an eventful trip on this continent since she sailed from her native Sweden to New York City in August. She testified before Congress. She helped inspire one of the largest international environmental demonstrations ever, largely led by youth. She scolded world leaders at the United Nations. She got trolled by the president of the United States. And she’s traveled throughout the continent to meet activists without leaving the ground.

As a climate-conscious traveler, Thunberg has been adamant about avoiding flying, which has a disproportionate greenhouse gas footprint. Instead, she’s been traveling largely by train and, in one instance, an electric car borrowed from former California Gov. Arnold Schwarzenegger.

However, avoiding flying has made travel more time-consuming and it has made planning trickier. Thunberg’s initial destination was Santiago, Chile, for the December United Nations climate conference where countries will hammer out details of how they plan to meet their climate goals.

But after widespread recent protests in the city, the Chilean government decided it could no longer host the conference. The venue was moved to Madrid, Spain, leaving Thunberg in a scramble to find a way there.

As #COP25 has officially been moved from Santiago to Madrid I’ll need some help.
It turns out I’ve traveled half around the world, the wrong way:)
Now I need to find a way to cross the Atlantic in November… If anyone could help me find transport I would be so grateful.
-> https://t.co/vFQQcLTh2U

A pair of Australian YouTubers with more than a million subscribers, Riley Whitelum and Elayna Carausu, answered Thunberg’s call for a ride. On Wednesday morning, along with racing skipper Nikki Henderson, they set sail from Virginia for Spain.

So happy to say I’ll hopefully make it to COP25 in Madrid.
I’ve been offered a ride from Virginia on the 48ft catamaran La Vagabonde. Australians @Sailing_LaVaga ,Elayna Carausu & @_NikkiHenderson from England will take me across the Atlantic.
We sail for Europe tomorrow morning! pic.twitter.com/qJcgREe332

The boat, a 48-foot catamaran called La Vagabonde, uses solar panels, hydroelectric generators, and batteries to provide power. And unlike the yacht that Thunberg sailed to the United States, La Vagabonde has a toilet.

“There are countless people around the world who don’t have access to a toilet,” she told the Associated Press. “It’s not that important. But it’s nice to have.”

The journey will take somewhere between two and four weeks, cutting it close to the start of the climate conference on December 2. Thunberg plans to attend the meeting but said she isn’t too worried about missing it.

“There are countless other activists who will speak there and deliver the same message as I would,” she said in a statement. “And it’s not like my voice is irreplaceable.”

Thunberg also intends to keep up with her Friday school strikes until Sweden’s government brings its climate change ambitions in line with the targets set out in the Paris climate agreement. Her book, No One Is Too Small to Make a Difference, went on sale this week.

Everything is awful. Here’s a Q&A with a philosopher about why cats rule.
House managers: Trump poses an “immediate threat to the nation and the rule of law”
Kanye West says he wants nothing to do with Blexit apparel
China and Australia are in a nasty diplomatic spat over a fake tweet — and real war crimes
Why innovative tech startups are thriving across the Middle East
Mark Zuckerberg’s $300 million donation to fix elections must overcome Facebook’s past