Half of 2018’s Democratic campaign ads are about health care 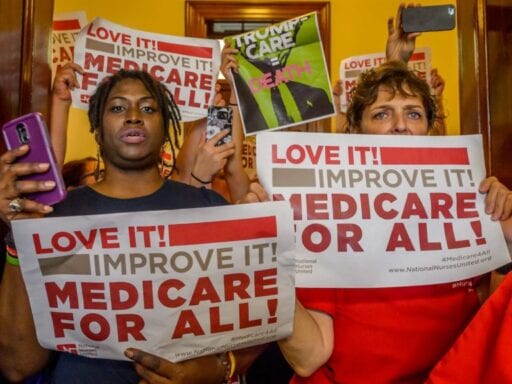 In midterm races, health care is far and away the No. 1 issue for Democrats — and many voters.

Money talks. Despite suggestions that health care won’t be a dominant issue in the 2018 midterm elections, a new analysis reveals Democrats are spending way more money on TV ads focused on health care than on any other issue.

The Wesleyan Media Project analyzed outside groups’ spending on campaign ads over the two weeks after Labor Day — “traditionally the start of the general election campaign,” as the Wesleyan organization put it — and found Democratic groups were spending about half of their dollars on health care ads in both House and Senate races.

They reviewed 280,000 ads over that period, an increase of 33 percent from the last midterm elections in 2014. The full report is worth reading, but on the issues, health care is far and away No. 1 for Democrats.

First, in the House campaigns, where Democrats have their best chance to retake at least one chamber of Congress:

This new ad from the Democratic Congressional Campaign Committee, airing in New York’s 19th District against Rep. John Faso (R), who voted for Obamacare repeal, is typical of the Democratic message: The Republicans voted to take away people’s health care and end Obamacare’s protections for people with preexisting conditions.

Faso’s district is a toss-up, according to the Cook Political Report. Obama won it twice, then Trump won the district by 7 points in 2016. So this is the message Democrats are deploying in races they absolutely must win.

Republicans haven’t totally given up on health care in House races — it accounts for about 34 percent of their outside ads, Wesleyan found — but, as the Daily Beast’s Gideon Resnick documented last week, Republicans in key races have actually sought to erase or soften their stances on health care on their official campaign websites.

In the battle for the Senate, spending is even more lopsided. Health care doesn’t even crack the top five issues for Republicans, but it is once again easily the top issue for outside Democratic groups.

We’ve already talked about this Sen. Heidi Heitkamp ad, but it’s worth watching again. Heitkamp, a Democrat in North Dakota, which Trump won by more than 35 points, is maybe the single most vulnerable Democrat in 2018. She’s putting her eggs in the preexisting conditions basket as a breast cancer survivor herself.

Democrats have good reason to think health care is an election winner. Polls seem to come out every week that confirm 1) health care will be an important issue for voters in 2018 and 2) voters overwhelmingly trust the Democrats more than Republicans on the issue.

It can be hard to believe (at least for me) that health care can still be so salient a year after the GOP’s Obamacare repeal dreams ended. But the ad money, and the polling, tells a clear story.

Climate change and soaring flood insurance premiums could trigger another mortgage crisis
Elizabeth Warren can’t escape the  Medicare-for-all funding debate — even on SNL
Trump “ordered” US companies out of China. Despite claiming otherwise, he can’t do that.
Hope Hicks will testify in front of the House Judiciary Committee next week
Lucy in the Sky tries and fails to address astronauts’ “space madness”
A DHS agency said America’s elections were secure. So Trump fired its leader.