Halloween costumes have a size problem 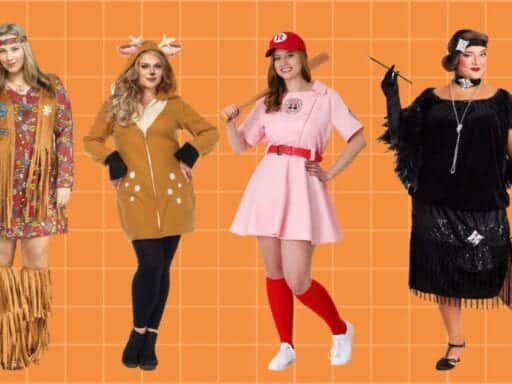 When Disguise Costumes released a “sassy” — read: “sexy” — Ursula-style costume for The Little Mermaid fans in 2012, it only came in straight sizes — no plus sizes. Critics immediately fired back. Ursula, as they rightly noted, is a sea witch of substance.

But sexy costumes for plus-size women are just the tip of the coral reef, so to speak. Most would have trouble picking up any kind of costume off the rack.

Halloween in the United States is an $8.8 billion industry, and dressing up is a big part of it. According to the National Retail Federation, an estimated 67 percent of Americans will spend $3.2 billion on costumes this year, more than candy or decorations. But the costume industry isn’t kind to women who don’t conform to a certain size. This, despite the fact that 68 percent of American women wear a size 14 and above.

A recent survey by HalloweenCostumes.com, which bills itself as the largest online-only retailer of Halloween costumes, bears out this disconnect, too. Nearly 70 percent of the 2,000 adults it polled said they didn’t believe there are enough plus-size costume options available for consumers. The language is admittedly imprecise — what does “believe” mean? Or “enough”? What that number tells us, however, is that people are noticing a sizable gap in the market that retailers aren’t filling.

“I’ve always made my own Halloween costumes just by putting stuff together. … That’s because I can’t find an out-of-the-box costume that fits me.”

“I’ve always made my own Halloween costumes just by putting stuff together,” says Alexis Krase, proprietor of Plus Bklyn, a plus-size specialty boutique in New York. “If I want to be a black cat, I’ll pull out all the black stuff from my wardrobe and draw on whiskers. That’s because I can’t find an out-of-the-box costume that fits me.”

Krase, who wears a size 26, knows she can go online and find something, but even garments marketed as plus have hit-or-miss fits. The reason, she says, is some manufacturers, to appear more inclusive, perform something called “scaled-up sizing,” where they essentially gin up measurements by adding numbers to a waistline or a sleeve length. While this may work for straight-size bodies, plus-size ones don’t scale the same way. And since Halloween is a once-a-year event, most companies don’t even bother. “It’s a costly endeavor to expand sizing,” Krase says. “You have to start from scratch, hire fit models, and find the right sizing for each piece. It takes a lot of work to do that.”

Fit is complex, especially for women and even when body type isn’t part of the equation. (A size 14 “pear” doesn’t wear clothes the same way as a size 14 “hourglass” or a size 14 athlete’s build.) “A lot of times brands and manufacturers aren’t considering fit because it’s another level of quality,” says Jessica Crouch, founder of Luxor and Finch, a fitting technology firm based in New York. “It’s almost a luxury to have all of these options for fit.”

Another mistake brands make is assuming plus-size women aren’t as fashion-forward as their thinner counterparts. “Historically, plus-size brands have offered ill-fitting options that conceal the body, rather than draw attention to it,” says Sarah Barnes, content marketing manager at Trendalytics, a New York merchandise-intelligence firm. “That is no longer the narrative in today’s world.” The top five items plus-size women search for, for example, hew closely to streetwear and athleisure trends.

Men — plus-size men included — celebrate Halloween, too, of course, and many dress up, but the truth is men have more dedicated resources and less negative attention and stigma about their waistlines. Men’s costumes are also generally less sexualized and don’t require a precise fit: think block-shaped characters like Fred Flinstone or Sully from Monsters Inc. So plus-size women have to deal with a whole other echelon of frustration.

Despite the growing chatter about size inclusivity, thanks to brands such as Universal Standard and Fenty and spokesmodels like Tess Holliday and Ashley Graham, any shifts in the positive direction have been slight, if not negligible.

And because of their transient nature, Halloween costumes tend to take a few-sizes-fit-all approach to fit. The scale runs from extra-small to extra-large, and then, if you’re lucky, 1X, which corresponds to a women’s size 12 to 16, and 2X (20 to 22). If you’re extremely lucky, you might even find a 3X (24 to 26).

Spirit Halloween, which hosts costume pop-up shops around the country, for instance, had just one 3X-to-4X costume on its website at press time: Oktoberfest Gretchen — shoes, stockings, and beer mug purse sold separately.

If you type “3X” into Party City’s search bar, you’ll turn up about 15 results. Several are Santa suits. Most of its culturally relevant plus-size costumes — Captain Marvel, say, or Sailor Moon — fall under the generic label of “Plus,” which confusingly varies in measurements according to style. (You have to click the chart to find out which range your potential purchase falls under, like a Kinder Egg surprise.)

Target, whose plus-size Halloween line is pretty much online-only, also uses the vague “Plus” moniker. But the retailer doesn’t always provide a measurement chart of these items, which is less helpful, and even its in-house Eek and Hyde styles only go up to an extra-large. Walmart has a couple of options that go up to 6X and 7X, but only if you fancy being a swashbuckling pirate or Mrs. Claus.

Only 25 percent of Americans will buy their costumes on the internet, per the National Retail Federation. The vast majority of ensemble hunters will turn to grocer-retailers such as Target and Walmart or specialty stores like Party City or Spirit Halloween. (Neither Party City or Spirit Halloween responded to requests for an interview.) Plus-size women, however, rarely have the luxury of finding something at a brick-and-mortar store. Extended sizes are typically available only online, which requires a level of access — Wi-Fi connection, an Internet-compatible device, and a credit card or digital bank account — that is far from a universal privilege.

Because of this, the women I spoke to referred to something akin to a “fat tax” — one that goes beyond the markup retailers sometimes place on plus-size versions of the same style. (It’s getting better, if marginally.) Plus-size women who shop online also have to deal with the cost of shipping, and if the item doesn’t fit, returns.

“It is definitely an added burden for plus sizes, when stores don’t have physical outlets,” says Tanita Abrahamson, who works in financial services in Chicago and wears a size 18. “Why can’t I just be able to go in and try on a dress or a pair of pants, or find a pair of stockings? You have to do so much more planning than other people.”

Plus-size women might have an easier time at dedicated plus-size outlets like Torrid and Ashley Stewart, though some pieces might be more accurately described as Halloween-adjacent, like a Spider-Man hoodie or a T-shirt that reads “Creeping It Real” in bone-shaped letters. Fandom-oriented retailers like Her Universe and Hot Topic can also fulfill many “stealth cosplay” needs, with the added bonus of being wearable past Halloween, since disposable clothing is helping to ruin the planet.

“It is definitely an added burden for plus sizes, when stores don’t have physical outlets.”

For costume costumes, however, it’s digitally native brands, like HalloweenCostumes.com and Yandy that provide the most variety in sizes.

Plus sizes make up 12 percent of the total assortment at Yandy, an e-tailer best known for offering seemingly random (or zeitgeisty) sexy costumes, imagined imitations of Sexy Mr. Rogers or Sexy White Claw. Last year, the company carried 120 plus-size costumes; this year, it’s up to 150, with the biggest size it sells a 5X. “We have a pretty wide plus selection compared to most retailers,” says Pilar Quintana-Williams, its vice president of merchandising. (Sexy Tater “Thot” and Sexy Buzz Lightyear, alas, only go up to extra-large.)

Yandy, which sometimes works with vendors to release exclusive styles, decides which costumes to size up based on demand. If a 3X style performs well one year, it might get a 5X upgrade the following year, though sales mostly come from the smaller side of the plus-size spectrum. Popular plus-size outfits over the years have included Egyptian goddesses, witches, and black cats, which more or less mirror the top-selling straight sizes.

HalloweenCostumes.com claims to have 300 percent more plus-size options than its competitors. It carries 500 plus-size styles up to 8X, which “no one else offers,” says CEO Tom Fallenstein, because it designs about half of them in-house, like its bestselling Grease Pink Ladies’ jacket or Dottie’s baseball outfit from A League of Our Own. Straight sizes, however, still outsell plus ones four to one, he says.

Fallenstein says the company decides what costumes to make based on the search terms site visitors use, but it also seems that most costume retailers don’t quite have a bead on what plus-size women want, which — surprise! — is pretty much the same as what straight-size women want. The women I interviewed complained of too many stereotypical costumes like cops, pirates, and nurses, and too few in the way of au courant characters.

Marie Denee, an Atlanta-based entrepreneur and publisher of the Curvy Fashionista, for instance, wanted to dress as one of the Dora Milaje women from Black Panther at the height of the movie’s success last year but was left disappointed. “That costume was everywhere, just not plus,” says Denee, who wears between a size 16 and 18. Emily Bastedo, a blogger who works in cybersecurity in Houston, wishes she could dress as Eleven from Stranger Things, but the officially licensed replica only goes up to a large.

Then there’s Jennifer Carver, a size-24 hotel manager in Mobile, Kentucky, who has trotted out the same costume for the past eight years — a giant whoopee cushion — because she lacks other options. Somewhere along the way she added a self-inflating whoopee cushion that made wet squelching noises. One year, she brought along a fart machine. “Each year it just escalated,” she says. “It became my thing.”

“Don’t automatically assume we don’t want to be sexy on Halloween because we are fat.”

She also found the costume apt. “A round costume for a round person,” she said, wryly. Certainly one misconception plus-size women face is they don’t want to show some skin. Even after the Ursula kerfuffle, octo-lady ensembles in plus sizes remain far more covered up than their straight-size counterparts.

“Don’t automatically assume we don’t want to be sexy on Halloween because we are fat,” says Danée Miller, a production scheduler for a manufacturing plant in Mobile, Kentucky, who wears between a size 18 and 20. “If we see an amazing costume on a thinner woman, you better believe we want that same exact costume — just make it bigger in the correct way for us.”

For Krase, owner of Plus Bklyn, the paucity of plus-size costumes is just a microcosm of a much larger problem.

“Halloween is more difficult, because it’s kind of like an event that happens once within a year, but all year long, plus size, women are still short of choices,” she says. “There really hasn’t been an effort that’s put behind it to create a space for plus-size women.”

The controversy surrounding the Times’s handling of the latest Kavanaugh allegation, explained
5 fact-checks from the Senate’s hearing on social media
The insect collector who gave us stop motion
The House is voting on immigration today. No one seems to know what’s going on.
As outcry over family separations grows, Trump meets with House Republicans on immigration
Elizabeth Warren wants congressional staffers to get paid more