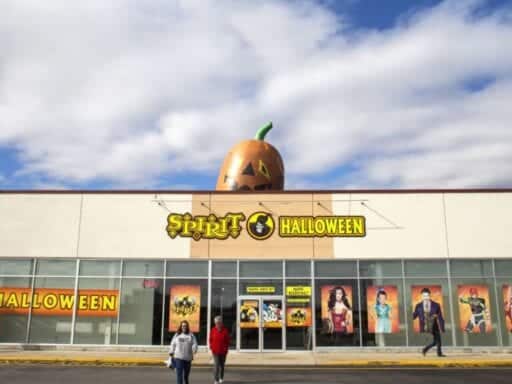 The first thing I notice about the Spirit Halloween at 65 Broadway is that the building’s exterior is far too nice to house a seasonal Halloween pop-up shop, even though that’s exactly what’s going on. The building, located in Manhattan’s Financial District, was built in 1916 and was used as American Express’s headquarters until 1975. Now, for a limited time only, it’s full of Halloween costumes and spooky lawn decorations.

Pop-up Halloween stores exist all over the country. They usually arrive in late summer or early fall, before the leaves have even started changing color. They set up shop in whatever vacant retail space will take them, whether it’s a now-defunct Babies R Us, a former grocery store, or the first floor of the American Express building. Then, a day or two after the big night, they vanish, not to be seen or thought of for another year.

Despite the brick-and-mortar retail apocalypse taking place across the country, Halloween pop-ups like Spirit have endured. When traditional retailers file for bankruptcy and leave empty big-box stores in their wake, they also give Halloween retailers more potential locations to choose from. Shockingly, even the rise of online shopping can’t seem to kill the Halloween store.

The big business of Halloween shopping

Halloween spending is expected to reach $9 billion in 2018, with the average person participating in Halloween festivities spending an estimated $86.79, according to the National Retail Federation’s annual Halloween survey.

But the holiday wasn’t always the big moneymaker it is today. Two stores — Spirit Halloween and Party City — helped transform the way people think about and celebrate Halloween, a holiday that was once considered child’s play.

Joe Marver founded Spirit Halloween in 1983, spokesperson Marisa Uzzolino told me via email, and quickly grew the business from one pop-up store in the Castro Valley Mall in California to 63 stores across the country. The stores were a spinoff of Marver’s first retail venture, Spirit Women’s Discount Apparel, according to a 2016 Bloomberg report, and much of Spirit Halloween’s initial inventory was a mix of regular women’s clothing interspersed with wigs, makeup, and superhero masks. In 1999, Marver sold the company to Spencer Gifts, which is perhaps best known for carrying novelty T-shirts and cheap sex toys.

The company has been on an upward trajectory ever since. Uzzolino told me that there are “over 1,300” Spirit Halloween stores in the United States and Canada this year, which she noted was a 5 percent increase from 2017. All stores will close on November 2. Uzzolino declined to say what percentage of total company sales happen during the Halloween season. (I assume it’s a lot, given that it is a Halloween store, though the Spirit Halloween website sells costumes year-round.)

In addition to permanent stores across the country, Party City has opened approximately 250 Halloween City pop-ups, 51 of which will double as Toy City pop-ups, a company spokesperson told me. The company expects to hire around 25,000 seasonal employees this year, roughly 2,500 of whom will stay on after the Halloween season ends.

Even though Party City isn’t just a Halloween store, the holiday is one of its busiest times of the year. In 2016, according to a Bloomberg report, the company bought a factory in Madagascar so it could manufacture its own costumes. The previous year, a quarter of its total annual revenue — approximately $560 million — was made during the Halloween season.

The art of the Halloween real estate deal

All Spirit Halloween told me about its retail strategy is that it faces “challenges securing the best locations” but “has an excellent real estate team that works year round to scope out and lock in the best locations available.” In 2012, though, Spirit Halloween’s senior director of real estate, Frank Pacera, discussed the process on the Kimco Realty Blog’s podcast.

“Pretty much November 1, the minute our door is closed, we are — or actually, before our doors close — we are prepping for the next season,” Pacera said on the podcast. “We literally are, 12 months out of the year, getting ready for this holiday. … Right after we close our doors, we have a field operation of people who are based throughout the country, and they basically scout their entire markets that they’re responsible for on a regular basis.”

Those agents spend “months” negotiating the deals. The typical store is somewhere between 7,000 and 10,000 square feet, though some are smaller. In suburban areas, Spirit Halloween’s agents look for vacant real estate in shopping centers that have “other national tenants,” like Best Buy, Target, or Walmart.

Spirit Halloween’s agents may work year-round to secure leases, but its retail hiring process is decidedly seasonal. The company hires and trains seasonal employees over the summer, and flies all district managers to New Jersey for a week-long training meeting.

At the Spirit Halloween on Broadway, two employees — who declined to give their names — told me they started working there in September. One of them said she got the job because she knew the manager; the other nodded her head in agreement but didn’t specify how she started working. They had previous retail experience but hadn’t worked at a Halloween store before, they both said, and they knew the jobs ended in November. Then they went back to checking out customers.

Party City’s Halloween preparation — the scouting of store locations and deliberations on which costumes to carry — also begins a year in advance, Bloomberg reported in 2016. Seasonal employees are hired in the summer, and merchandising teams begin setting up the stores in August. The company hired 35,000 seasonal employees in 2016.

Neil Stern, a senior partner at the real estate consulting firm McMillanDoolittle, told me that these deals are good for both landlords and temporary tenants. “Some money is better than no money,” said Stern. “There’s a lot of [vacant big-box stores] out there that are otherwise sitting vacant right now. Obviously it’s not as good as a permanent lease, but it’s better than nothing. There’s relatively little downside.”

The death of retail is good for Halloween pop-ups

This year, Spirit Halloween pop-ups have opened in vacant Toys R Us and Babies R Us stores, shuttered grocery stores, and at least one credit card company’s former headquarters.

Stern told me he saw a Spirit Halloween store open up in a former grocery store near his house. “It was a huge space, like, 60,000 square feet,” he said. “They just took part of the space. I’ve seen them go into a [former] Pier 1 [Imports] space in my neighborhood. They’re very creative and flexible in the kind of spaces that they’ll take.”

We’re at a Halloween store that used to be at a babies r us and it’s so surreal pic.twitter.com/H7DLb7qqqO

These temporary stores typically pay more rent than long-term tenants, according to a Halloween Express agent who spoke to CityLab on the condition of anonymity in 2014. The leases are typically six to eight weeks long; most stores are vacated by November 15 at the latest.

All of this would be impossible without the existence of vacant retail properties in need of tenants, even if those tenants only plan on being there for a few weeks. What’s bad for retail is good for Halloween pop-ups, at least to a point. These companies need vacant spaces to fill, but they also need nearby stores to draw in consumers.

Strip-mall vacancies rose to 11.1 percent during the recession, according to CityLab — not great for retailers but a huge opportunity for Halloween pop-ups. “During the crash, I would get calls before this Halloween to ask if I wanted space for next Halloween,” the anonymous Halloween express agent told the website.

Once the economy started improving, though, pop-up Halloween stores started having trouble finding locations. “It was a lot easier [in 2012] to find spaces that were, say, 10,000 square feet and above,” Randy Koziatek of Halloween Express told CityLab.

But recent retail shutterings and bankruptcies may be a boon for these temporary stores. As more big-box retailers file for bankruptcy, turn to online sales, or close their doors altogether, Stern said, it’s possible that Halloween stores will expand even more, and that other types of retailers may soon follow suit. “I think there’s going to be a lot of vacant real estate. The question is, are there other models that we might see adopt similar strategies?”

And unlike other retailers, Halloween stores may not be too susceptible to the rise of online shopping.

“The big thing for a retail store is that there’s a sense of discovery,” Stern told me. “There’s a bit of a treasure-hunt mindset associated with it. Like, ‘I want to decorate my house but I don’t know how I’m going to decorate my house, so I want to look around and be inspired. It doesn’t mean that the business isn’t going online, but it’s a category that lends itself particularly well to a physical store.”

For some shoppers — especially those who didn’t figure out their costume idea until a few days before the holiday — Halloween pop-ups are one of very few places to get a last-minute costume. If you order a costume through a specialty website like Yandy or Leg Avenue, it’s possible that it won’t arrive on time.

The Spirit Halloween on Broadway, meanwhile, is open seven days a week and closes at 11 pm; Party City’s New York locations are open until midnight. It’s not hard to imagine someone popping in to buy a costume after work, or someone realizing they’re missing a key accessory on their way to a party.

As more big-box retailers file for bankruptcy, turn to online sales, or close their doors altogether, Stern said, it’s possible that Halloween stores will expand even more, and that other types of retailers may soon follow suit. “I think there’s going to be a lot of vacant real estate. The question is, are there other models that we might see adopt similar strategies?”

Retail may be dying, but the Halloween pop-up store is here to stay — until November, that is.

Star Wars ended the decade on a rough note. At least it had Babu Frik.
Mississippi and Iowa join the ranks of states reopening nonessential businesses
The first post-debate polls say Biden won
Life Itself is a disaster of a movie, caught in a web of its own privilege
One state has banned unsolicited dick pics. Will it fix the problem?
Michael Che and Colin Jost open the 2018 Emmys to lukewarm laughs