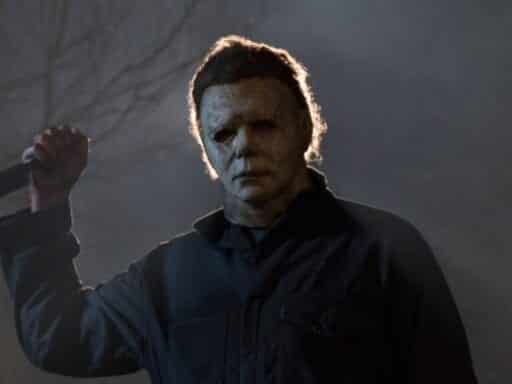 The new movie does indeed have an end-credits moment. Here’s what it means.

The buzz around the new remake of Halloween has been pretty loud, so it’s not that surprising if you’ve heard contradictory reports about how it ends. I don’t want to say too much, but the rumors that there’s an end-credits scene you should stick around for are, well, a bit overblown.

The truth is perhaps a bit disappointing, but it’s also not too disappointing. There is no end-credits scene, but there is an end-credits moment, and it has implications for the continuation of the Halloween franchise beyond this latest film.

Want to know more? For that, I’ll have to spoil the new movie — though if you’re a Halloween fan, or even just a general horror film fan, this spoiler won’t be a spoiler so much as a, “well, duh.” (And I promise not to spill too many deets.)

In the final moment of the new Halloween movie, after the credits roll, the film score is abruptly replaced with the loud, creepy sound of heavy breathing. The implication is that it’s our beloved villain, Michael Myers — and that the film’s climax, in which his evening of Halloween carnage is inevitably brought to a halt — didn’t take.

As I pointed out after my recent viewing of all 11 Halloween movies to date, the franchise has always revolved around its villain. This is both because Michael Myers is such an iconic and terrifying serial killer, and because it’s convenient to the production. After all, actor Nick Castle, who played the original Michael and reprised the role in the latest film (though per tradition, he and his character are credited only as “The Shape”), could easily be exchanged for some other guy in a creepy mutilated William Shatner mask. Michael, in his quirky, eccentric bloodlust, can just keep going and going.

So it makes sense that the franchise has evolved one rule that’s stayed consistent throughout the series, no matter what: Michael can’t be killed.

That might seem obvious, but the Halloween franchise has always treated Michael’s death as a kind of casual affair. Before the climax of the first film, he’s shot six times and reacts as though it’s no big deal. Throughout the franchise, he survives multiple gunshots, stabbings, explosions, car crashes, electrocution, being run over, having his skull bashed in, being set on fire multiple times, and (sorta) being decapitated.

I won’t reveal which of these methods, if any, are used to dispatch him in the latest movie, but the fact remains that if you’re making a Halloween film, most audiences are going to expect that whatever is done to stop Michael Myers is only temporary. Jamie Lee Curtis’s Laurie Strode certainly knows that, which is why the later entries in the franchise (specifically H20 and the new film) have shown her morphing into a paranoid survivalist.

So the new Halloween’s end-credits moment, such as it is, won’t come as much of a surprise to the franchise’s biggest fans. And of course it opens the door for more Halloween sequels to come.

But you already knew that. After all, Halloween — and Michael Myers — are forever.

Amazon tried to buy a new Seattle City Council. It doesn’t look like it worked.
Drug overdose deaths fell in 2018 — but were still near record highs
How the LGBTQ rights cases before the Supreme Court affect all Americans
Biden’s National Security Council to get a key human rights official
Netflix’s Love Wedding Repeat is a frothy, comfort-food rom-com
Lucy in the Sky tries and fails to address astronauts’ “space madness”