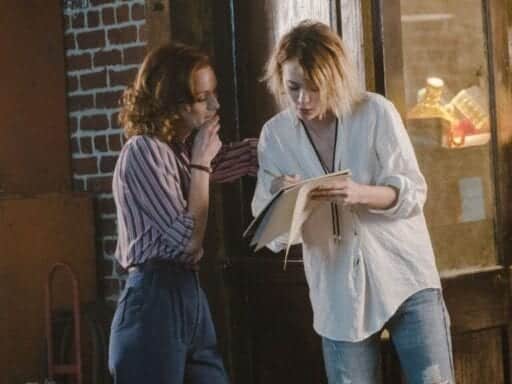 The series, set in the tech world of the ’80s and ’90s, has the hard-won optimism these times require.

In all the years I’ve been working as a TV critic, no show I’ve recommended has had more people end up digging it than Halt and Catch Fire, the ’80s- and ’90s-set tech world drama that aired on AMC from 2014-2017 that now can be watched in its entirety on Netflix. Invariably, the people I recommend the show to at least like it, and most of them come away loving it. It’s a foolproof people-pleaser with a little bit of something for everyone.

It also absolutely nails a tone that’s tricky to manage: optimism, tempered with a sense of how hard it is to accomplish anything with real meaning in this world. The characters on this show strive and strive and strive to build a better computer, then a better internet experience, and finally a better search engine. And because they live in our world, we know that they will fail to take out the Apples and Googles and Facebooks of the world. But as we watch them fail, we also see them become better people for having known each other — even if they frequently come into bitter conflict with one another.

Really, that above paragraph will let you know if this is the show you need right now. But if you want to know more, read on for more thoughts on why Halt and Catch Fire — one of the best TV shows of the 2010s — should move to the top of your queue. (At 40 episodes, all around 45 minutes in length, it will make for a substantial watch, but not an insurmountable one.) And if you’ve already watched, consider this an invitation to revisit it all over again.

You might wonder at first if Halt and Catch Fire knows what it’s doing. It’s worth being patient with the show.

Like so many TV dramas of the 2010s, Halt and Catch Fire has some false starts. Creators Christopher C. Rogers and Christopher Cantwell originally set up the series as a conventional antihero drama about the sneering, self-proclaimed genius Joe Macmillan (Lee Pace), who hijacks a small Texas computer manufacturer in the early 1980s and tries to get it to build his dream machine. He’s joined in this by two computer whizzes who can do the work while Joe offers the Steve Jobs-style bravado — Gordon Clark (Scoot McNairy) and Cameron Howe (Mackenzie Davis).

These early episodes struggled to stand out from the glut of other antihero dramas rattling around in the 2010s. Yet they’re also necessary for setting up the series’ larger idea, which is that Joe might think he’s a genius, but the thing he really needs is to be tempered and improved by the people around him. By the show’s ninth episode — which ends with a reveal so good I won’t spoil it, even though it aired in 2014 — it’s clicking on all cylinders. When season two starts, it’s instantly one of the best TV shows of its era.

A big reason for this dramatic shift was the show’s change of focus from Joe to its two main women characters, Cameron and Donna Clark (Kerry Bishé), who is a genius tech brain in her own right but also Gordon’s wife. The friendship between the two powers the show’s final three seasons, and each season is better than the last for the ways they all examine this professional and personal partnership as it grows, frays, then rebuilds itself.

Beyond the central foursome, the series also builds out a pretty stunning bench of recurring characters, from Toby Huss as the head of the company Joe hijacks, who becomes an unlikely father figure to Cameron, to the folks who work for the early internet company Cameron and Donna found, to Donna and Gordon’s two daughters, who grow up in to complicated characters in their own right. And the show’s casting directors have an eye for talent, from burgeoning movie star Davis to Big Little Lies star Kathryn Newton, lots of actors got one of their first major roles on this show.

Halt and Catch Fire is remarkable for how little of its drama is tied to life-and-death stakes but how important it feels all the same. Its most gutting moment occurs during a boardroom meeting in the show’s third season, and the big dramatic question of its final season is “Can these people ever forgive each other and work together again?” The characters are cruel to each other, but in believable ways where you rarely think they’re being cruel for sport. And yet they can be so, so kind to each other as well.

Roger Ebert used to say that he found few things as moving to see depicted onscreen as kindness that is offered in spite of any ulterior motive. Television often forgets that kindness, too, is a muscle we can flex, in addition to all the ones bent on taking as much stuff as we possibly can. Halt and Catch Fire might start out as an antihero drama, but by the end, it’s earnestly engaged in the question of not just how we can better ourselves but how we might, through being kind, help others become better too. There’s never been another show quite like it.

Halt and Catch Fire is streaming in its entirety — all 40 episodes — on Netflix.

Can guided tours save Airbnb?
How to think about coronavirus risk in your life
Trump’s new trade deal with South Korea, explained
It looks like Ohio’s primary won’t be happening on Tuesday after all
Jeffrey Epstein dies of suicide while awaiting a new sex trafficking trial
Bernie Sanders wins the Democrats Abroad primary