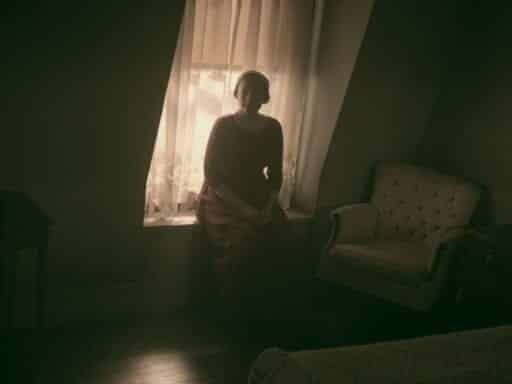 “When the parents are being dragged away, they’ll try to smile or pretend it’s okay, so the last image their child has is of them smiling.”

“The Last Ceremony,” the 10th episode of The Handmaid’s Tale’s second season, is a gutting experience, filled with some of the darkest moments yet on a show known for dark moments.

But what’s surprising and a little uncanny about the episode is a sequence near its end, in which protagonist June, a Handmaid kept in sexual slavery by the state (and also referred to as “Offred”), is given a chance to meet with the daughter she had taken from her way back in the series’ pilot, as she attempted to flee the theocratic nation of Gilead for the relative safety of Canada.

The two share a small moment together, then are forced to live out their separation all over again, as Hannah is ripped away from June and the two call out for each other. It’s not the first time The Handmaid’s Tale has eerily dovetailed with current news events, but it might be the most astonishing, both because the scene is so good and because the show’s writers had no way of knowing very similar circumstances would be unfolding in the US when the episode aired.

I talked with Yahlin Chang, the writer of the episode, about the research she did on that scene and how learning about the separation of families to write what she assumed would be a completely fictional scenario has helped her interpret the recent news cycle.

Our conversation has been lightly edited for length and clarity.

Handmaid’s Tale is always timely, but the scene between June and Hannah is eerie in how prescient it is, especially since you wrote this last fall. I’m wondering as you’ve watched this growing humanitarian crisis on our southern border, how has having worked on this season of the show affected your thoughts on that?

When I first knew that I was going to write this reunion scene, it was like, “Okay, what is this crazy situation where you have a mother whose child has been ripped away from her, and she’s only going to see her for 10 minutes. What would happen in that scene?” And then for this episode to air when it is happening every day in this country, it’s really shocking and depressing.

I talked to a UN expert in doing research for that scene and she was telling me about what happens in a scene like this, and she was telling me, “Here’s what happens when parents have a few last words to say to their kids before the kid is ripped away, and [the parents are] taken away by the wall and shot or detained or arrested or whatever.” I was, like, “Give me more examples of this kind of crazy shit happening in foreign countries during wartime in horrible, totalitarian regimes overseas. Give me more stories like that so I can understand it.”

For it to be happening now in America, so close to home, it’s just really horrible. I was listening to those audio recordings of kids being torn away from their parents in the detention centers and I just couldn’t believe it.

Has having done all that research made this news hit harder in some ways?

All the experts I talked to said it never goes the way you want it to go. You want it to be all hugs and kisses and everything is great, but it’s really difficult. It’s really difficult to watch. … Hannah in the scene, you look at her and she’s sort of out of it. You wonder what’s happened to her? How has she been traumatized? This poor girl, how has her development been arrested? In a way, I’m glad it’s hard to watch and I’m glad that it will hit home in terms of showing how wrong it is to rip kids away from their parents.

For me personally, yeah, it was a super hard scene to write, and I was on set also when we were shooting it, and it was hard. I have three kids. I had to go to a pretty dark place to write the scene and to imagine what if my kids were kidnapped and then I could only see them for 10 minutes? What would happen? It’s such a nightmare scenario.

But part of what’s great about TV and narrative in general is that it makes you imagine yourself in another person’s shoes, and that’s the first step toward empathy. If we could have more empathy for these mothers and kids who are separated, that’s gotta be a good thing. If we could try and experience what they’re experiencing, then maybe that would help make things like this policy not happen.

We haven’t seen Hannah in so long on the show. What did your research tell you about how children react to that sort of experience?

For a child developmentally at that age, even though she’d been prepared before seeing her mother, she would be really flooded with contradictory emotions upon seeing her mom. When Offred runs in and hugs her, Hannah shies away and runs to her Martha. She’s just really overwhelmed and shocked. She didn’t really know what happened to her mother. It’s sort of just too much for her to process and she has this feeling of abandonment.

One of the things I was told was that she would replay in her head the last time she saw her mother. When Hannah in the scene said, “Did it hurt when they hit you on the head?” it hits Offred that what Hannah has been doing for the last three years is reimagining and replaying that horrible scene that starts off the show in the pilot, where she’s ripped away. Hannah still has been living in that for a while in terms of trying to figure out what happened to her mom.

The other thing is that even though she saw bad men take her mother away, Hannah or a child of that age would feel abandoned and angry because all she understands in her universe is, “I want my mom. Every day I waited for my mom. I wanted to see her, and she didn’t come. She wasn’t there for me when I needed her.” That would make her angry and resentful, and it would make her feel abandoned.

What the psychologist told me is that Hannah, to some extent, had to write her mother off. She could not cognitively make sense of this idea of, “I love my mother. I still love her. I’m waiting for her. She’s going to come.” Kids, they have to adapt. She had to adapt to her new life with her new parents and accept her new reality.

In order to move forward and bond with her new parents and her new family, she would have to put all those questions and doubts behind her. She couldn’t keep longing for her mother all the time. It really disrupts her equilibrium to see her mother again.

You do see that her guard is totally up at the beginning [of the scene], but then it breaks down and she hugs her mom and she gets very upset when her mother has to leave again. She’s been forced to relive that trauma when she’s being ripped away from her mother because that happened literally, again.

What Offred does — which is amazing to me in the scene, it shows what a great mom she is — is she just tries to take care of Hannah. One of the things that the UN expert told me is that when the parents are being dragged away, they’ll try to smile or pretend it’s okay or look like it’s okay so that the last image their child has of them is of them smiling and happy and peaceful. Offred definitely tries to do that with Hannah.

I’ve been reading all the articles about the stunted development and how traumatic it is for the development of the brains of these children who are being ripped away from their parents. I think that with Hannah, when you watch that scene, you worry about her. I think you worry about what’s happened to her because of the way she seems. She doesn’t seem 100 percent okay.

How much do you think Hannah understands about the political situation of what happened to her mother? You said she has to write her mother and her father off to some degree, but how much does she understand that it wasn’t June’s fault?

She’s being subjected to a great amount of Gilead brainwashing right now. She’s not being taught to read or being taught anything about the world, but she’s probably been given religious lessons about what Wives are versus Marthas versus a Handmaid.

Suddenly some weird bad men, governmental forces are pulling them away and saying, “Oh, they’re criminals. They did something terrible.” That’s incredibly destabilizing for a child.

You’ve sort of uncannily predicted the current news several times this season. How does working on this show help you make sense of the world we live in, if at all?

We do freak out. When Jeff Sessions and Sarah Sanders were talking about the Bible and how it’s biblical to follow the law — using the Bible to justify policies like this, it’s straight out of the Gilead playbook. I can’t believe it. I’m sure they haven’t watched The Handmaid’s Tale. But using religion as a tool to justify all sorts of horrible things — it’s something that’s happened throughout history, but it’s because of that, you feel like we’re beyond that. Like we know that that’s terrible.

We have the advantage of making up our narrative. The big thing that rules us in the writer’s room is to be as truthful and honest to the story and the characters and to the context as possible. Given who these characters are in this context, what would really happen? That’s what we followed and we were trying to tell a really truthful, really honest story and it leads, unfortunately, to some really dark places where people behave horribly, where the government is terrible, where brutal things happen.

To me, what’s really redeeming and uplifting is that Offred is brought so low. Terrible, terrible stuff happens to her. But the moment she sees Hannah, it’s like the love just infuses her. That whole scene is devastating, but it’s also like the triumph of the human spirit. Love survives and love wins. When you see the whole season, you’ll see that there is this heroic struggle as it leads to triumphs and victories and the uplifting moments and moments of connection, even in a context as horrible as Gilead.

The way we ended last season was “Am I going into the darkness or the light?” Out of the darkness comes the light. Human beings are capable of horrible things, but they’re also capable of amazing and wonderful things. For this episode, it’s important to show that ripping kids away from their mothers is bad, and rape is bad. But love can still survive and the human spirit could still triumph.

At the very beginning of the series, June’s just an ordinary person living her life and then all this stuff happened. She didn’t start out a hero, but eventually you see how strong she is and how capable she — and all of us — can be in the face of adverse circumstances.

Trump’s baffling, self-defeating attack on the New York Times
America needs to decide how much Covid-19 risk it will tolerate
Biden’s fight to de-Trumpify the courts, explained
Vox Sentences: Ebola is not slowing down
VMAs 2018: 6 winners and 2 losers from a mostly lackluster show
Summer is for meteor showers and stargazing. Here’s how to watch.