Hannity says Biden should call Trump and thank him for his Covid response. That’s a stretch. 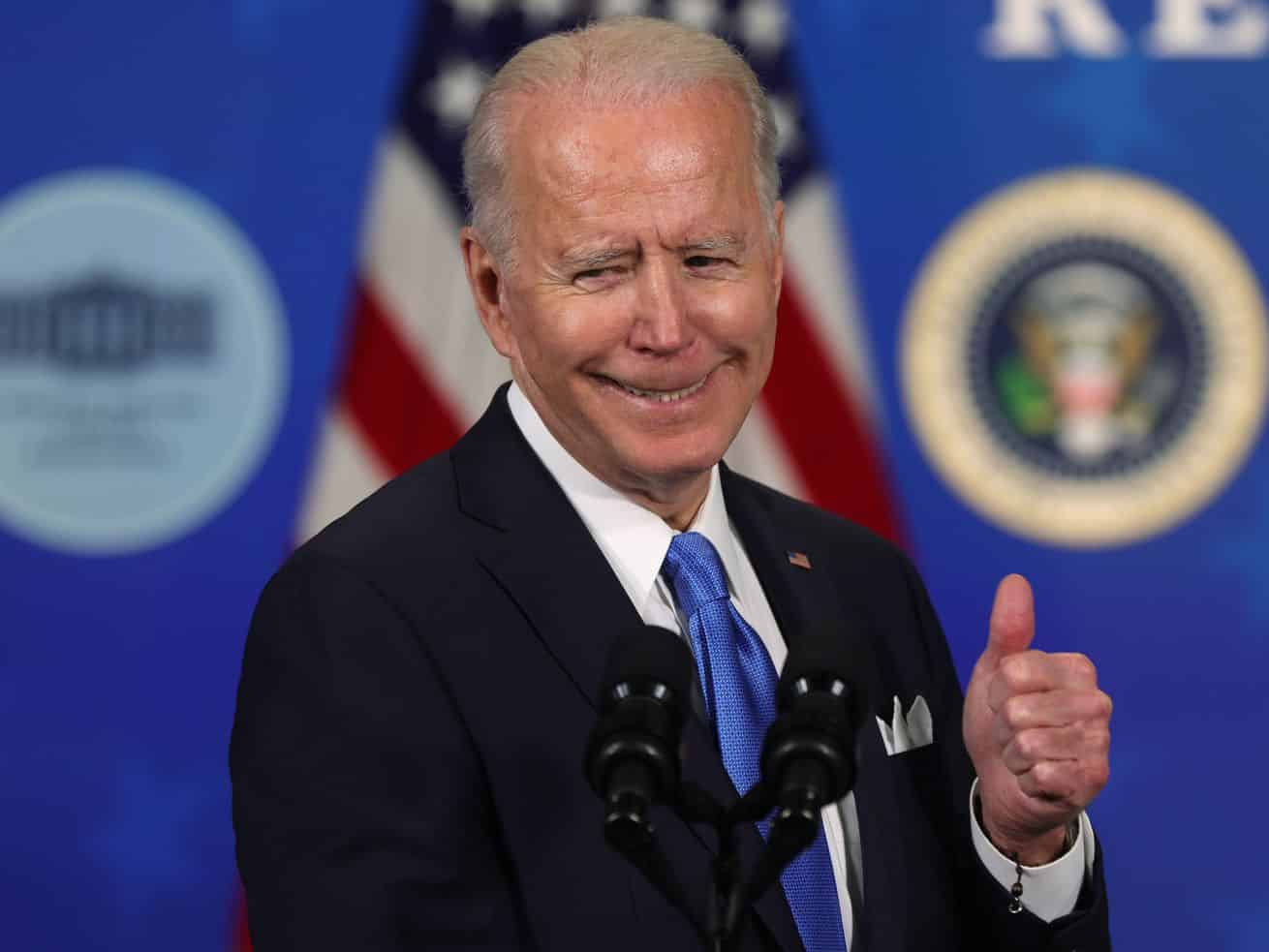 Fox News reacted to President Joe Biden’s primetime announcement that all American adults would be eligible for a coronavirus vaccine by May 1 and the country’s aim is return to a semblance of post-pandemic normalcy by July 4 by insisting that former President Donald Trump actually deserves the credit. But that claim can’t withstand scrutiny.

While Trump’s Operation Warp Speed program provided incentives for private companies to speed vaccine development and did directly help Moderna develop an effective vaccine, it’s not necessarily the case that vaccines wouldn’t be available today had it not been for Trump. The first FDA-approved coronavirus vaccine was developed by Pfizer last year without any direct help from the federal government.

To be clear — Trump deserves some credit for the fact that multiple vaccines were developed so quickly. As my colleague Dylan Scott reported last October, the federal government’s multi-billion dollar investment in helping companies like Moderna and Johnson & Johnson develop vaccines no doubt helped the country get to a point where there is finally some light at the end of the tunnel. Biden has acknowledged this, saying in December that “I think that the [Trump] administration deserves some credit, getting this [vaccine effort] off the ground, Operation Warp Speed.”

But vaccines don’t do much good if there’s no plan to get them into arms, and this is where Trump really fell short. As was the case when the US struggled to ramp up coronavirus testing infrastructure in the early days of the pandemic, the Trump administration’s plan for vaccine distribution did little more than pass the buck to under-resourced states. Trump’s failure to plan for the “last mile” resulted in episodes where unused vaccines were thrown out in the weeks before Biden took office.

So while it’s going too far to say Trump deserves no credit, the criticisms Biden opened his primetime speech with are totally fair.

“A year ago we were hit with a virus that was met with silence, and spread unchecked. Denials for days, weeks, then months,” he said, alluding to Trump’s effort to downplay the coronavirus ahead of and during his failed reelection campaign. “That led to more deaths, more infections, more stress, and more loneliness.”

“A year ago we were hit with a virus that was met with silence, and spread unchecked. Denials for days, weeks, then months. That led to more deaths” — Biden begins his big coronavirus speech by taking shots at Trump pic.twitter.com/gljYpCMLv5

Biden moved on, barely alluded to the former president the rest of the way. But he had already provided Fox News something to get mad about.

“He kicks them in the groin”

It’s hard to spin a pandemic response that resulted in more than half a million dead Americans as a success, but during a rant about Biden’s speech on Friday morning, Fox & Friends co-host Brian Kilmeade tried.

“We don’t need to go over the 500,000 dead, we had that moment,” he said. “Let’s talk about the future moving forward. Every time he has a chance to praise the previous administration, he not only doesn’t praise, he kicks them in the groin.”

Brian Kilmeade: “We don’t need to go over the 500,000 dead, we had that moment. Let’s talk about the future moving forward. Every time he has a chance to praise the previous administration, he not only doesn’t praise, he kicks them in the groin.” pic.twitter.com/n9OupjYfAF

Kilmeade’s suggestion that Biden took a cheap shot by criticizing Trump’s coronavirus response echoed what host Sean Hannity said on his show shortly after the speech.

“Joe Biden — he needs to pick up the phone, I suggest, call Mar-a-Lago, and, yeah, bring unity to the country, as he says he so desperately wants, and thank President Donald Trump,” he said, adding later: “No Trump, no vaccine, Joe. Stop taking credit for something, frankly, you had nothing to do with.”

Hannity: Stop taking credit for something frankly you had nothing to do with pic.twitter.com/81ZD00eLJI

It’s true that when Trump left office, about 1 million vaccines were being administrated each day. But Biden has nearly tripled that rate in less than two months.

So Hannity’s comment that Biden “has nothing to do with” the progress of the US vaccination effort is false. Biden has overseen the federal government purchasing hundreds of millions of vaccine doses, making possible the aggressive timeline he outlined on Thursday. And his administration has overseen the development and implementation of vaccine distribution plans that do more than just rely on the states.

But Fox News spin is not only impervious to reality; it’s also impervious to shame. A panel discussion on Hannity featuring former Trump chief of staff Reince Priebus and former Trump press secretary Kayleigh McEnany went after Biden for being too prepared — proving that Fox was prepared to attack Biden if he said anything short of “Thank you, Mr. Trump. You deserve all the credit.”

Hannity and two former Trump administration officials are now attacking Biden for being too prepared pic.twitter.com/HmoXMka3tX

In the same vein, while Hannity has been hammering Biden on a nightly basis for minor verbal gaffes that he insists are evidence of some sort of cognitive impairment, a chyron on his Thursday show denigrated Biden for merely “surviv[ing]” a “short, scripted speech.” Damned if he does, damned if he doesn’t.

It gets even more absurd

Kilmeade and Hannity’s far-fetched spin was nothing compared to comments from Fox News host Mark Levin, who went on a rant so unhinged on Hannity’s show that you had to wonder if he even watched the same speech.

“This speech that Joe Biden gave is the most disgusting, propagandistic speech that a demagogue, even a politician, has ever given,” Levin said. “It is pathetic.”

Even the fact that Biden says the country is on track to be able to safely have small Fourth of July gatherings was somehow spun as bad by Tucker Carlson and Laura Ingraham, both of whom complained that Biden is acting like a tyrant by telling them what to do.

“How dare you tell us who we can spent the Fourth of July with,” Carlson said.

Tucker: How dare you tell us who we can spend the Fourth of July with pic.twitter.com/YaAtPDuYVl

“And then to pick Independence Day as the day where he says he might allow people to gather is just so un-American,” said Fox News contributor Mollie Hemingway on Ingraham’s show. “Joe Biden doesn’t get to tell me when I can have a barbecue in my backyard.”

As ridiculous as all this may seem, it’s serious stuff to most of the approximately 2.5 million people who are tuning in to watch Fox News’s primetime shows, which remain the top rated in cable news even without Trump in the White House.

Then, on Friday morning, Hannity’s false and misleading rant about how Biden should call Trump and thank him was covered as if it were news by one of Fox News’s “news side” shows, illustrating one of the ways Fox regularly launders its opinion content into the news cycle.

Fox News is having a hard time with President Biden

Trump inherited the longest streak of job growth from former President Barack Obama when he took office yet still characterized the state of affairs he inherited as “a mess” even in the earliest days of his administration. Fox did little to push back on that spin. So the idea that Biden has some sort of moral obligation to give Trump credit for anything is hypocritical at best.

But in their struggle to land blows on a popular president who just signed a very popular $1.9 trillion Covid relief bill, Fox News is normalizing the absurd by, for instance, trying to turn the mundane into huge scandals and linking Biden with culture war grievance issues.

And it’s not just the primetime hosts. On Friday afternoon, Chris Wallace equated Biden fairly criticizing Trump’s Covid response to Trump’s treatment of Obama, saying Biden is “being about as gracious to his predecessor as Donald Trump was to his predecessor.”

Chris Wallace claims Biden is “being about as gracious to his predecessor as Donald Trump was to his predecessor” by criticizing Trump’s Covid response. Reminder – Trump’s political rise in ’11 was due to him spreading racist conspiracy theories that Obama wasn’t really American. pic.twitter.com/ox7LabYpaf

Donald Trump, you might remember, rose to political prominence in 2011 by spreading racist conspiracy theories that Obama isn’t really American. So Wallace’s comment is about as false as false equivalences can be.

“Thank God for the genius of the Trump administration,” Scott said during a Fox News interview in response to Biden’s speech.

“Thank God for the genius of the Trump administration” — Sen. Tim Scott pic.twitter.com/R4UHKTke7k

But Scott’s praise of Trump rests on false premises. He claimed that, thanks to Trump, there were “300 million doses ready to be put in arms” on the first day of Biden’s presidency. But that’s not true.

According to a recent fact check by Kaiser Health News, Trump had contracts in place for enough vaccine to vaccinate 200 million Americans when he left office, but that’s not the same as “doses ready to be put in arms.” And furthermore, beyond vaccinating health care workers and people in assisted living facilities, Trump’s plan to get them in arms did little more than offer thoughts and prayers to the states.

Unsurprisingly, however, the “news side” hosts Scott was speaking with offered no pushback.

Rep. John Lewis, civil rights legend and moral center of Congress, has died at 80
The DOJ has a plan to protect voting rights. It might not be enough.
Stanley Tucci’s bookshelf is too messy, says celebrity book curator Thatcher Wine
Vox Sentences: On Iran, a resolute House
Millions of Americans are about to lose emergency paid leave during the pandemic
What Will Become of the Cruise Ship Smorgasbord?