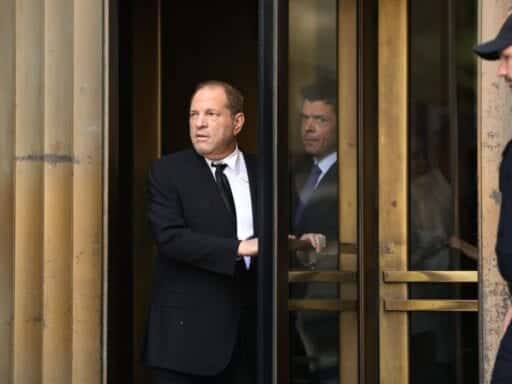 Weinstein’s been going out in public a lot lately.

Former mega-producer Harvey Weinstein has become a symbol of the powerful men taken down by the Me Too movement since 2017, when he was accused of sexual harassment, assault, and rape by dozens of women, including actresses Gwyneth Paltrow and Angelina Jolie. But despite frequent lamentations that we are living in an era of cancel culture, even Weinstein might not be permanently canceled.

On Wednesday night, Weinstein attended Actor’s Hour, an event for young performers based out of Downtime Bar on New York’s Lower East Side. And while there was outcry from some attendees, much of the crowd did not seem upset to see him there, vociferously defending Weinstein from any jokes or comments made at his expense.

Weinstein has been getting some practice at dealing with such reactions lately. According to the Hollywood Reporter, as his January trial date for rape and sexual assault approaches, Weinstein has begun to reemerge at some of his old haunts, like the lower Manhattan restaurant Cipriani Downtown. He attended September’s Actor’s Hour as well (and was denounced by a comic onstage that time, too).

The whole pattern has the appearance of a trial balloon, a test to see how the world reacts to the idea of Harvey Weinstein appearing in public again. And in Hollywood, that trial balloon is usually followed, sooner or later, by a comeback.

Some people were angry that Weinstein was at Actor’s Hour. They were escorted out.

I don’t want to imply that Weinstein’s appearance at Actor’s Hour was smooth sailing for him. But it’s clear that he had plenty of defenders present and that they won the day for him.

“I didn’t know we had to bring our own Mace and rape whistles to Actor’s Hour,” comedian Kelly Bachman remarked pointedly during her set, after referring to Weinstein as the “Freddy Krueger in the room.” In a video posted to social media, male voices can be heard booing Bachman’s joke in response and telling her to “shut up.” Later in the evening, actor Zoe Stuckless and comedian Amber Rollo confronted Weinstein at his table. Employees for Downtime Bar then escorted them both out of the venue, while Weinstein remained.

Kelly (@bellykachman) is my hero. Just a general fuck you to the Freddy Krueger in the room. pic.twitter.com/DZFm6fhxc1

In a statement on Facebook, representatives for Downtime Bar defended the decision, saying, “Please know that our goal at Downtime is to create an environment where everyone feels welcome. We respect the privacy of our patrons and event partners, and want to ensure that all guests are treated equally, with the same service and respect. In keeping with this goal, we made a decision that would allow the evening to continue as planned.”

The reaction of those in the room suggests that, to many observers, Weinstein, sitting quietly at his table, came off as calm and reasonable. Those who reacted poorly to his presence, however — who noted that someone who has been credibly accused of rape by nearly 100 women was sitting in the room with them and that this situation was not ideal — came off as shrill, irrational. They were making a scene. They were hecklers.

Creating this kind of narrative, in which the disgraced person is the quiet, logical one and those who object are the loud and irrational ones, is step one of a comeback process. We know it is because we’ve seen it happen before. Mel Gibson pulled it off in plain sight just a couple of years ago.

At the beginning of this decade, Mel Gibson was widely considered to be in disgrace. In 2006, video leaked of him ranting anti-Semitic slurs while being arrested for drunk driving. In 2010, audio tapes leaked in which the mother of his child accused Gibson of hitting her so hard that he broke her teeth while she held their child, and Gibson replied, “You deserved it,” before telling her, “if you get raped by a pack of ni**ers it’ll be your fault.”

Gibson lost his agent and he lost movie deals. He even faced criminal consequences: He pleaded no contest to misdemeanor battery charges, served probation, underwent court-ordered counseling, and paid $600 in fines.

But in 2017, Mel Gibson was nominated for an Oscar for Best Director for his box office smash of a war movie, Hacksaw Ridge. The Oscars telecast prominently featured Gibson ensconced happily in the A-list section, grinning his famous Sexiest Man Alive grin. By the end of the year, he’d picked up a role in the cuddly family comedy Daddy’s Home 2, which did so well that it led Vanity Fair to remark that for as checkered as Gibson’s past might be, he seemed to be “immune to the Weinstein effect.”

Gibson laid the groundwork for his comeback with a very simple strategy. Any time he spoke in public about his controversies — which was rare — he consistently created a narrative in which he was the victim and his accusers were in the wrong.

“Imagine the worst moment you have ever had being recorded and broadcast to the world and it wasn’t meant to be public,” he said in 2016. “You didn’t stand on a soapbox and do it, but that’s what happens, you know.”

The way Gibson told the story, he was trying to wrestle with his demons decently, in private, away from the spotlight. The people who dragged his sins out into the harsh glare of public knowledge were the ones who did wrong.

That’s the same narrative Weinstein and his proxies have used to talk about Weinstein’s Wednesday appearance at Actor’s Hour.

“Harvey Weinstein was out with friends enjoying the music and trying to find some solace in his life that has been turned upside down,” a representative told both THR and BuzzFeed News. “This scene was uncalled for, downright rude and an example of how due process today is being squashed by the public, trying to take it away in the courtroom too.”

Weinstein was just trying to go about his night quietly, according to his representative’s account. The people who dragged his sins out into the harsh glare of public knowledge were the ones who did wrong.

This kind of narrative is incredibly valuable for both Gibson and Weinstein. It gives them a way to position themselves as victims, to invite their audiences to sympathize with them and their sad life of persecution.

But it’s not all you need for a comeback. As I wrote for Vox in 2017, once Gibson had his narrative in place, he still needed additional tools to return to the A-list. He needed some of his powerful friends to go out on a limb for him (Jodie Foster cast him in her 2011 film The Beaver; Robert Downey Jr. made statements on his behalf). He needed to spend enough time out of the public eye for his sins to become vague and amorphous in the public memory. And he needed to find a way to mount his comeback as discreetly as possible, in a property that was unambiguously his but didn’t have his picture everywhere, so that people could gradually get used to the idea of Mel Gibson in public again. That’s why Hacksaw Ridge was an ideal comeback vehicle: Gibson directed it and it was clearly his baby, but he wasn’t acting in it so it wasn’t sold on his face.

Harvey Weinstein is ideally positioned to adopt the strategy that Gibson has already successfully used. Weinstein built his career on building other people’s careers; he has plenty of powerful friends left in Hollywood. Two years have passed since the accusations against him came out in 2017, and for a public overwhelmed by outrage fatigue, that may well be enough time for the details of his many alleged crimes to become fuzzy.

And because Weinstein is a producer, not a movie star, he doesn’t have to put his face on anything to prove that he can still create an Oscar-winning movie. He just has to convince someone to let him take on the right project — maybe a poignant indie movie that’s having trouble getting traction elsewhere — and then he has to turn it into an Oscars contender.

Industry observers have been waiting for Weinstein to try to make just such a move for a long time. When the accusations against Weinstein first broke in 2017, I asked gossip maven Elaine Lui if she thought Weinstein would ever be able to make a comeback. It was certainly possible, she replied: “Money is the only priority. If he’s able to land on a project that is a major box office success or a major Oscars success, he’ll be all right.”

As he begins to show his face in public more and more often — even with a criminal trial looming — Harvey Weinstein appears to be preparing to put that theory to the test.

The Masked Singer is a televised abomination I’m going to devour every second of
The New York Times is thriving in chaos
Kamala Harris was the Democrat you could imagine taking on Trump
Most Americans oppose abolishing ICE
The economy is slowing down. That’s bad for Trump.
Trump campaign lawyer breaks with Trump over the Capitol insurrection