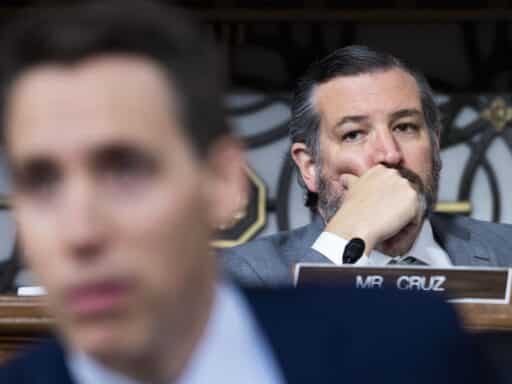 Sen. Josh Hawley says he will “never apologize” for objecting to Biden electors.

Republican Sens. Josh Hawley and Ted Cruz are facing mounting criticism for their role in inciting Wednesday’s deadly riot at the US Capitol, with their Senate colleagues and major newspapers alike calling for their resignation — or expulsion.

Hawley, the junior senator from Missouri, has also been disavowed by a former mentor, and publisher Simon & Schuster has abandoned plans to publish Hawley’s upcoming book. On Thursday, a prominent Hawley donor called for him to be formally censured for his actions.

Both senators helped lead a Republican effort in the Senate to object to the certification of electors from key states President-elect Joe Biden won in the 2020 presidential election — arguing, despite all evidence proving otherwise, that there were irregularities in the vote count which required further investigation. And they continued their efforts Wednesday night, even after pro-Trump insurgents stormed the Capitol earlier the same day.

Ultimately, Biden’s victory — 306 electoral votes to Trump’s 232 — was certified over objections by Hawley and Cruz. But their decision to join six other senators in delaying the process with objections to electors from Arizona and Pennsylvania was sharply condemned, even by some Republican colleagues, for sustaining the baseless election fraud narrative that inspired Wednesday’s attack on the Capitol and left at least five people dead.

Hawley in particular has been excoriated for a Wednesday morning photo showing him raising his fist in solidarity with supporters of President Donald Trump, who later stormed the Capitol.

“Sen. Hawley was doing something that was really dumbass,” Nebraska Sen. Ben Sasse told NPR in an interview Friday. “This was a stunt. It was a terrible, terrible idea. And you don’t lie to the American people. And that’s what’s been going on.”

Former Missouri Sen. John Danforth, an influential Hawley mentor prior to this week, went further, telling the Kansas City Star that Hawley was responsible for the riot and that supporting him was “the biggest mistake I’ve ever made in my life.”

“I don’t know if he was always like this and good at covering it up or if it happened,” Danforth said Thursday. “I just don’t know.”

Cruz, the junior senator from Texas, has also been under fire in his home state.

“Senator, those terrorists wouldn’t have been at the Capitol if you hadn’t staged this absurd challenge to the 2020 results in the first place,” the editorial board of the Texas Tribune wrote Friday. “So, we call for another consequence, one with growing support across Texas: Resign.”

“We’re done with the drama. Done with the opportunism. Done with the cynical scheming that has now cost American lives,” the editorial concludes. “Resign, Mr. Cruz, and deliver Texas from the shame of calling you our senator.”

Unsurprisingly, Cruz rebuffed calls for his resignation in an interview Friday, and Hawley likewise has shown no inclination to offer his.

“I will never apologize for giving voice to the millions of Missourians and Americans who have concerns about the integrity of our elections,” Hawley said Thursday, though there is no evidence to support any of his voter fraud allegations.

After Wednesday, Hawley and Cruz face questions over 2024 aspirations

The bipartisan furor over Hawley and Cruz’s decisions to stay the course with their objections, even though the same sentiment driving them helped incite the storming of the Capitol, has also sparked a discussion about their political futures.

Hawley and Cruz are both widely considered to be Republican presidential hopefuls in 2024, assuming Trump himself doesn’t shoulder the rest of the field out of the way in a bid to regain the White House.

Support for Trump was reaffirmed at the highest levels of the Republican Party this week with the unopposed reelection of Ronna McDaniel, a Trump loyalist, to continue serving at the head of the Republican National Committee.

And Trump, for his part, has signaled that he wants to run — but between the outside possibility of his being formally barred from holding elected office again and the extensive legal jeopardy he’ll face when he leaves office in just 11 days, there’s a real chance that the way will be clear for Hawley and Cruz, both of whom will likely be gunning to shore up as much support as possible with Trump’s base.

That part might not be difficult: For now, polling suggests that they both remain popular with the president’s most diehard supporters.

Specifically, according to a new tracking poll from Morning Consult that was taken January 6 and 7, 68 percent of those with a “very favorable” view of Trump also feel favorably toward Cruz, with 37 percent of strong Trump backers feeling favorably about Hawley.

Current support, however, may prove ephemeral by the time 2024 rolls around. One Trump 2016 campaign aide told Politico this week that many Trump supporters “saw through [Hawley’s] blind ambitious act” and didn’t view it as genuine.

“They don’t think he’s a real MAGA supporter,” the aide, Bryan Lanza, said. “He just comes across as insincere.”

Meanwhile, at least one editorial board — that of the St. Louis Post-Dispatch — has already deemed Hawley’s presidential hopes dead on arrival.

“Hawley’s presidential aspirations have been flushed down the toilet because of his role in instigating Wednesday’s assault on democracy,” the Post-Dispatch editorial board wrote Thursday. “He should do Missourians and the rest of the country a big favor and resign now.”

“Those who choose to continue to support [Trump’s] dangerous gambit by objecting to the results of a legitimate, democratic election will forever be seen as being complicit in an unprecedented attack against our democracy,” Romney said.

Mitt Romney: “What happened today was an insurrection incited by the president of the United States. Those who continue to support his dangerous gambit… will forever be seen as being complicit in an unprecedented attack against our democracy.” https://t.co/hxrZh9PRvt pic.twitter.com/V3hDAz57Xf

In most scenarios, that complicity in an outright attack on US democracy might prove to be a political deal-breaker. But if it remains Trump’s GOP — and Trump himself takes a pass, voluntarily or involuntarily, on the 2024 race — Hawley and Cruz might still find a future in the Republican Party.

Canada passes legislation legalizing marijuana, sales expected within 12 weeks
The Saudi teen who fled her family has been granted asylum in Canada
The Short, Troubling Life of the Intentional Food Waste Meme
Gordon Sondland’s revised testimony is still very difficult to believe
Batteries have a dirty secret
The many obstacles to the “GOP state legislatures steal the election for Trump” scenario